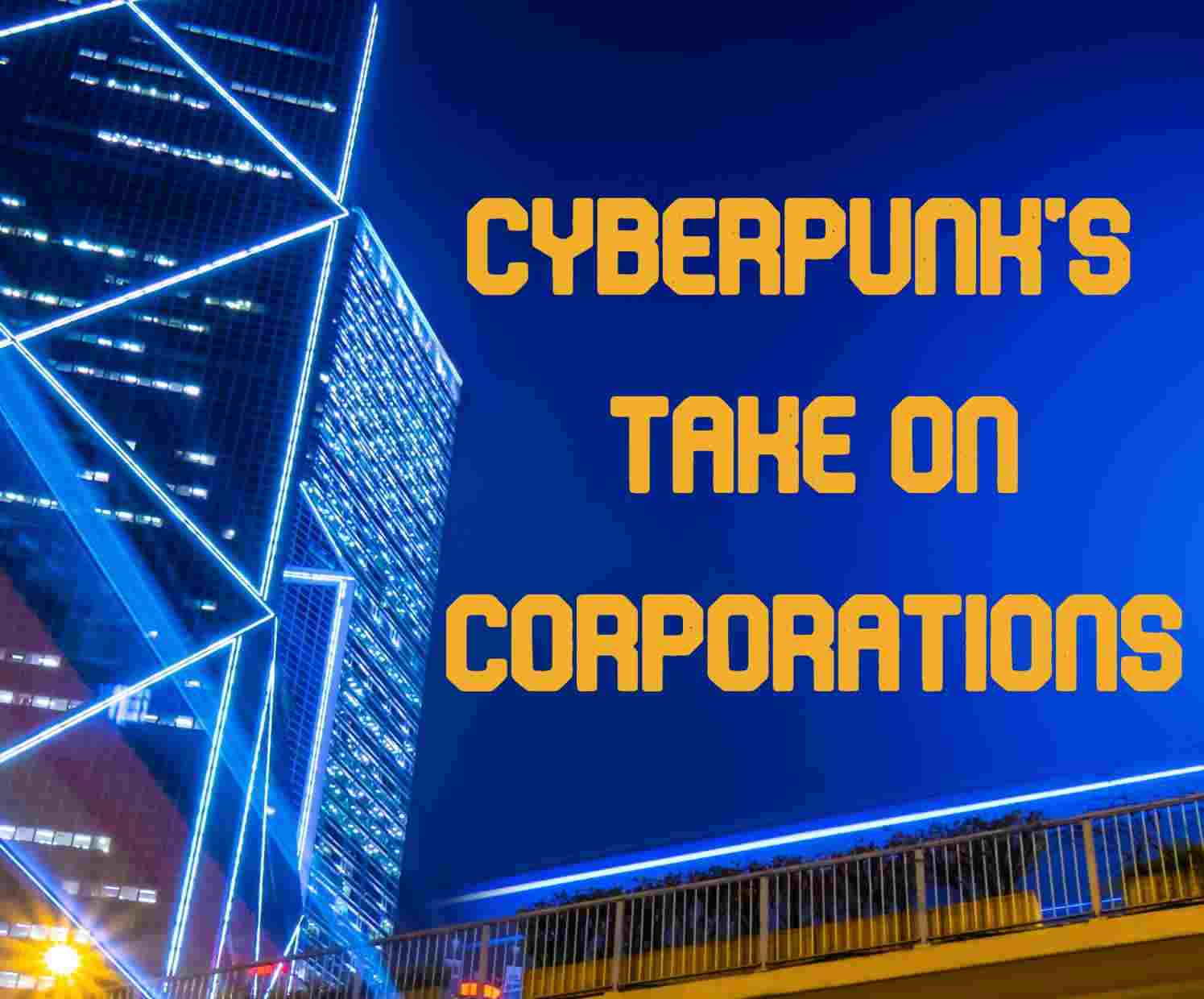 “The multinationals…had attained a kind of immortality."
- William Gibson
‍
Overview:
‍
Recently, we examined cyberpunk’s takes on advertising and cybernetic augmentations. Now, let’s look at its view on corporations. Cyberpunk is not trying to take a liberal or conservative stance, but to merely act as a conscientious observer of exploitative practices that subdue our humanity in the name of profit, in hopes that these observations will make us aware of what we may be giving up in pursuit of the comforts of modern life and the false promise of utopia through control.

Common tropes include being owned by the corporation as they manage your entire life, corporations becoming their own countries, and the protagonist being a pawn in a scheme of corporate espionage as they compete. Word and phrase frequency analysis provides an algorithmic-generated sentence, exemplifying the most common way to describe corporations based on keywords from 24 authors,
‍
He thought about corporate espionage jobs that fueled territorial wars for world power. Employees had become machines without rights.

Corporate power...the multinationals that shaped the course of human history...they had attained a kind of immortality. You couldn't kill (them) by assassinating a dozen key executives; there were others waiting to step up...access(ing) the vast banks of corporate memory.
--William Gibson, Neuromancer (1984)

"Corporation business,” he said by way of explanation. The girl was unnerved by this move, having the same hard-wired fear of the all-knowing, all-powerful Corporation as much of the rest of the population...She knew, or rather didn’t want to know, what The Corporation was capable of.
--Tanweer Dar. The Man With No Name.

“Things on Earth,” she said, a little awkwardly. “I guess they’re okay.The big governments collapsed, and the corporations just sort of took up the slack..." ...“The corporations sent their own armies. That was when everybody figured out that the governments were gone. There was a lot of rioting and all that, and finally the big companies just stepped in. Started policing the cities, paying welfare, reopening the hospitals and all."
--Lewis Shiner, Frontera.

He had helped to make this council what it was—brought others to the table and had given them a unified goal. His trade deals with the off-world corporate separatists had made them all richer. He had made ThutoCo a guiding force for global profits
--Matthew A. Goodwin, Into Neon

The nondisclosure agreement Laney had signed was intended to cover any incidences of Slitscan using its connections with DatAmerica in ways which might be construed as violations of the law. Such incidences, in Laney’s experience, were frequent to the point of being constant…DatAmerica was less a power than a territory; in many ways it was a law unto itself.
--William Gibson, Idoru

His work on embedding encryption/decryption chips in the brain, enabling governments and corporations to "turn off" knowledge of sensitive information held by employees, had made his name anathema among privacy rights advocates.--
Mark McClelland, Upload

“They’re telling them that corporations like Wellbeing Incorporated are bigger than the government. That they can do what the hell they like because they run the city.”
--Michael Robertson. The Blind Spot

He was told the government permitted Daedalus Astrodynamics to use antimatter strictly for the propulsion systems on the Constellation. The existence of this machine suggested that other agreements had been made. It meant Daedalus Astrodynamics had far more political leverage than he knew.
--Elias J. Hurst, Europa

I’m staying in the Fringe with you. I told you it would be suicide out there by yourself, and besides, it’s not like I can go back home. I’ll be just as dead as you if the Corps catch me.”
--Patrick Tillett, Arc City Stories (a cyberpunk anthology)

“We’re still in the corporate zone. They monitor everything.” …The living room filled up with the boots of corporate police.
--Marlin Seigman, Code Flicker: A Cyberpunk Thriller (Retro Media Book 1)

The frequency of razor wire suggested this was not yet gentrified territory. There were a couple of Universal Square badges controlling entry, a firm that mostly did low-level industrial security…Behind (them) the familiar shapes of derelict skyscrapers.
--William Gibson, All Tomorrow’s Parties
‍
And there were plenty of corporate spaces, privately owned systems that nonetheless also existed in the unreal “space” of the myriad networked computers that was the nets; all of those preferred to be invisible, at least to an outside eye.
--Melissa Scott, Trouble and her Friends

There’s a new corporate space, with new IC(E). I didn’t recognize the system, but I thought we could crack it. Trouble doesn’t—didn’t agree. But it’s interesting IC(E).” She could almost see it, taste it in memory, a massive cylinder of glass, light spiraling slowly up its side, to drift down again in a faint haze, hiding the codes that make up the real security. She had never seen IC(E) that tight before, could hardly wait to try to crack it...
--Melissa Scott, Trouble and her Friends

A blue monitor console stood against the far wall, Sentrax corporate sunburst glowing on its face; in the center of the room was the egg, split hemispheres of chromed steel, cracked and waiting. One half-egg was filled with beige tubes and snakes of optic cable...Gonzales had come to Myanmar to do an information audit. The local Sentrax group supplied...Myanmar.
--Tom Maddox - Halo

“We’re not one of those corporations that hand out copies of Art of War at a business retreat, spout a few lines, and then nothing’s changed next day in the office. You’ll see just how important Azteca is at CommUnitas. Follow me.”
--Dr. Joseph Hurtgen. Tower Defender

"I’ve got a good notion who’s behind it.” He flipped the metal pack over. Inscribed on the reverse side were the words PROPERTY OF GREATER PRODUCTION CORPORATION, BROADCAST MEDIA DIVISION. Adder picked up the scanner node between one thumb and forefinger and waggled the extended middle finger of his other hand at it. “I hope you’re watching, Mox,” he snarled. “Up your ass with your pathetic schemes.”
--K.W. Jeter, Dr. Adder

McNihil is drawn into an investigation by DynaZauber (DZ), a corporation whose accountants are Derrida and Foucault. DZ owns you, owns your home, owns your life and your death. Taking away people’s right to property or the ability to customize their surroundings helps control them, "(Employees) weren’t completely under your control if they thought they had names of their own," as Jeter writes. If you become indeadted from debt they still own you – making you work in the afterlife to pay it off, extending your indentured servitude.
--Analysis of K.W. Jeter's Noir.

A machine that could be reprogrammed. Augmentech? The Imagination Corporation? Someone, somewhere, had built the thing that had murdered T Petrovic. He removed the blanket, looking down at the beautiful woman on the bed, her eyes closed, her face a mask of purest peace. The sleep of the dead.
--Jon Richter, Auxiliary: London 2039 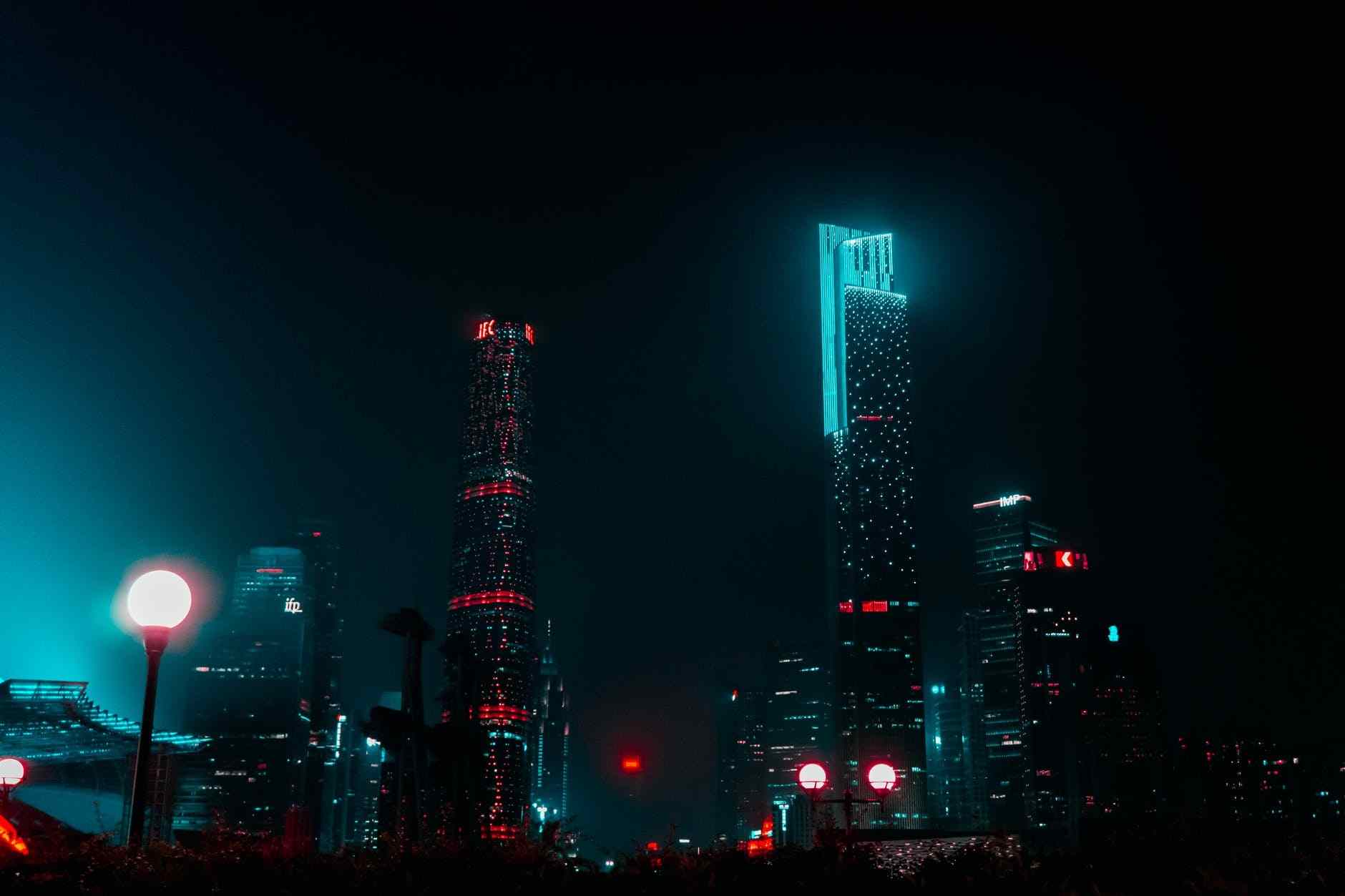 It's the same reason why corporations like MilkyWay Unlimited picked individuals with both high IQs and high-risk factors for their off-world university program. The higher the risk in an individual, the higher the creativity, the better the output, and the corporation reaps all the rewards cause they make you sign away the rights to anything you create while working for them...
--Eric Malikyte, Ego Trip (Neo Rackham Book 1)

She was owned by 100 Worlds Music Corporation where she worked in big-time advertising, programming primo promo feeds. She was also the hottest coder of illegal pornware in Red City.
--Dr. Dora Raymaker, Hoshi and the Red City Circuit

In Vacuum Flowers (1987), a corporation has bought Rebel Elizabeth Mudlark’s mind and works to maintain their copyright on her original personality to sell to others as a secondary persona, since she’s what author Michael Swanwick calls, an expensive little piece of developmental wetware. (Note that this was one of the first uses of the term wetware).

I watched multinational corporation wage slaves, MNCs, slumming from the upper deck, AoS, Cavindish, Nakami, ZhengJohansen, KPP, WuYuBai, coming down to the Mids for entertainment, looking for services provided, mostly flesh, but other diversions as well, gambling, raves, pachinko, drugs.
--Mark Harritt, Entropy Angels
‍
Cardboard cut-out shanties adorn the feet of skyscrapers. Corporations managed to negotiate the right to pursue happiness…They shed their employees like snakes shedding skin. They tunnel out of their cubicles, leaving virtual footprints in the shapes of logos. Mission statements flow across virtual uniforms to give false importance to tasks that have no meaning… One by one, employees turn off their outfits like fallen stars blinking out, going from walking billboards to people again. The Forever Glitched sit on the street curbs silently threatening them with having their job replaced if they’re disobedient.
--Mark Everglade, Hemispheres

“Did you know, that long ago, before the war, people could live wherever they chose? Not just in great arcologies, like the corporations, but also in small communities, without fear or worry?” Valentina looked up and smiled. “I don’t think that’s true,” she said.
--Nicholas Catron, Redemption & Revenge
‍
“Private enterprises, typically large multinational corporations such as Soma, Global Electric and Junglez, who were also the owners of the proprietary databases previously filled with Operation Photobomb-targeted pictures and videos: data…Once people try to access their pics and vids, they’ll be mighty disappointed and will immediately complain to the database administrators—the corporations that own them.”-------Christopher Keast, Datapocalypse

...(The Exec Board) decided to initiate a new program for some of their factory workers. Volunteers were to get cash bonuses, and toasters, TV sets, et cetera, for undergoing surgery designed to improve their job performance. GPC bigfarts figured they’d save a bundle by retooling their workers’ arms and hands to flex in different ways...rather than retooling or redesigning a lot of expensive machinery. After all, if you’ve got some apparatus that performs about two hundred separate functions on a plastic flange extrusion, it’s cheaper to alter your assembly line workers to handle the item in the factory’s most efficient way, rather than trying to build the machine to fit all its actions to be within natural human capabilities, right?

The enormous room was evidently an assembly line: far down its length, the figures were only skeletal metal frameworks slung from chains attached to a conveyor track in the ceiling. Then, at stations progressively closer, cylinders, tubes, other mechanisms, were hooked up in increasingly complicated arrangements; padding, heating elements, and artificial skin were fitted over the framework; finally, only a few yards from them, the completing articles of body hair, eyes, and miscellaneous details were being applied or inserted. A dozen or more of the finished products stood in frozen nudity before them.

Even the best encrypted signals can be intercepted.” Scarlet knew this was true. Christopher had done it all the time for corp espionage jobs. “Therefore we have saved the information on a data cube, also highly encrypted. We would like you to transport it from Walker to our affiliate in secret."
--Todd Cinani, Arc City Stories (a cyberpunk anthology)

She hated lying, but it came with the territory of coming out of the woodwork from being a reclusive inventor and into the glory of the corporate world.
--Christopher Keast, Datapocalypse

I was a ‘jacker, a hacker who hijacked information, usually from other corps, but sometimes in house as executives sought advantage over a rival, shitting on others to climb the corporate ladder.
--Mark Harritt, Entropy Angels

‍The leased territories were too valuable to leave much room for nature.
--Neal Stephenson, The Diamond Age

Governments and corporations neglected and abused the planet for so long life was barely hanging on. Pegasus rescued many endangered species that would otherwise have vanished by now. Complete ecosystems were recreated for transportation to the planet we named, New Eden. Every type of creature was represented on this new Ark.
--James Hill, Pegasus (solarpunk section)