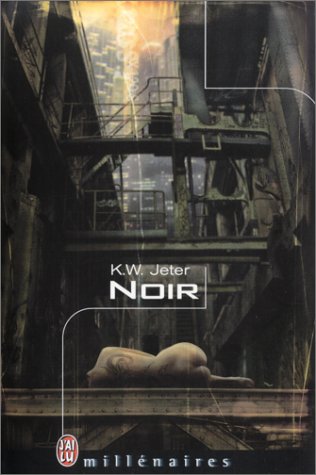 Intro:
K.W. Jeter wrote one of the first cyberpunk books, Dr. Adder, then coined the word steampunk, wrote the Blade Runner sequels, and had his work form the basis for The Mandalorian Season II. His educational background is in Sociology and English. After recently interviewing him, I noted that the reviews for Noir missed the point. Spoilers abound in a complete reckless abandonment of etiquette for sake of conveying the theme in this review.

Plot:
‍McNihil is an x-cop who investigates a homicide, and Nihil is important because the world is meaningless to him, the Mc referring to either “son of,” as in that which was inherited from a previous generation, or to globalization, rendering his name as the Globalization of Nothing in response to the McDonaldization of Society. As a sociologist, Jeter's likely drawing from a familiarity with the renown George Ritzer’s works by these titles, one which predated Noir by five years.

McNihil sees the world in black and white both figuratively and literally due to an occipital augmentation that went wrong. His augmented reality allows the world and its inhabitants to appear as if they’re in a noir movie with all the appropriate make-up and forties throwbacks in décor, but even the phenomenal isn’t entirely under his control the book states, an important foreshadowing of the end.

He’s drawn into the investigation by DynaZauber (DZ), a corporation whose accountants are Derrida and Foucault, though they aren’t characters. DZ owns you, owns your home, owns your life and your death. Taking away people’s right to property or the ability to customize their surroundings helps control them,

(Employees) weren’t completely under your control if they thought they had names of their own.

If you become indeadted from debt they still own you – making you work in the afterlife to pay it off, extending your indentured servitude. After all, this is a world where your neural circuits can be ripped out of your head to wrap around high-fidelity stereo cables to improve the sound quality for bourgeois audiophiles listening to German operas, with the indeadted still aware and undergoing torture as the sound passes through them. But these deadbeats can also be built into toasters to increase their efficiency, kids’ train sets, or other appliances as needed, or simply put to work. The argument from the corps is, if the company can own your life, why not your death, too, since life is more valuable than death? When the dead pay off their debt they are allowed to pass into non-existence.

DZ follows the latest managerial trend, Pimp Style Management. Even your organs are company property – Detect-&-Dissect kits are installed in each cubicle to rip them out and sell them when your vital signs start to sink. All of this is justified by Die Protestantische Ethik Und Der Geist Des Kapitalismus, showing Jeter’s sociological background further (note that I disagree with Weber’s analysis).

The corp’s masterplan? Infect the brain with a virus to make it not only more susceptible to advertisements, but to make it generate advertisements from within it. A virus isn’t really necessary for this, however, as people go shopping even when they don’t need, or even want anything, to create the desire within them, so it’s overkill.

McNihil’s thrown into this crap trying to figure it out. Police don’t help as they’re on the corp’s side, allowing them to pre-register hits on people which makes murder legal, especially for the greatest crime – copyright infringement. Since wars had decreased, the government’s duty to protect property was extended to intellectual property, with legions of people like McNihil sworn to protect it at all costs, resulting in one scene where he tortures a guy in his young twenties for selling a digital torrent, his only concern the blood stain on his pants, but then, McNihil sold his wife into afterlife slavery just because he wanted some fancy augmentations, so he’s an ass almost beyond redemption and a true cyberpunk anti-hero.

McNihil does make one sacrifice for a cube-bunny, November; even though he says it’s for his own purposes there were less altruistic ways he could have gone about it. His brief emotional connection is driven by her youth and his sexualization of her mourning. He still converses with his dead wife too though, literally. After making a sacrifice to November, McNihil starts to see a wider range of colors, but he still can’t see himself unless his image is reflected in a bullet. 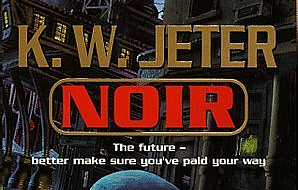 He turned from the kiss that filled his mouth, the hot copper taste of coded flesh…He’d made the connection inside another’s flesh, that point where electrode and neuron were one fated synpase…locked in bandwidth rapture…virginal lipstick, Chernobyl mother’s milk, original sin and all its photocopies…Cain-marked and Lilith-born…His body its own ejaculating prison.

Sex and violence are tied together, with bullets creating red blossoms inside bodies instead of being described as bloody wounds, their motion described as virginial penetration. The whole world is based on a gelatinous substrate of sex but it’s a cold world indeed, a world where women don’t freeze from the temperature but from the coldly assessing gazes of men. Women are objectified as mere berries about to be crush(ed) between your teeth.

“Most people I see in here think the world started with their first orgasm.”
No, thought McNihil. They’re wrong. That’s when it ends.

Religion:
Church services take place underground in wired cathedrals vaulted with sewage pipes. The argument is a ubiquitous deity could listen as well in the sewer as anywhere else. Gunshots note the Redeemer’s return. At the end of service they say log off in peace after taking the E-charist,

To say that the body and blood of Christ are present ‘in, with, and under’ the electrons moving down the wires…It has to be transubstantiation. The electrons are changed into the holy substance and the communicant is downloading the actual blood and body of Christ.

‍Even this religion is corrupted further, however,
‍
Republicans, cutting each other with little razor knives and lapping up red puddles among the discarded condoms…all the universal data flowing into the receptors in your palms, like reverse stigmata. Jesus bled for the world…DynaZauber would improve on that, and let the world bleed for them.

Tattoos:
Tattoos are important to the book, as one’s debt is engraved into one’s hand and automatically changes to match one’s account. Tattoos can travel between bodies like an infection. One tattoo on a woman’s tongue reads Abandon hope all ye who enter here. Clever.

A vision of black-ink tattoos that slowly woke and shifted beneath a woman’s skin, pale as unsunned cave fish, white as Bible pages, dimly phosphorescent. The swarming of these tattoos like decorating koi…

Metaphor:
The book’s extremely abstract with constant use of metaphor within the sentences and extended metaphors both within each scene and throughout the entire text.

In the world outside, the great big empty one, the ice beheaded the gray waves, the ground split open in white fissures, the bones of ancient wooden ships were picked over by the wind. The train rolled on, or flew a millimeter above the charged tracks, and through some window that opened inside her skull, she could see the empty snowscapes, the oceans that chilled drowning men’s hearts to a standstill.

The iris of an onrushing training. Iris and inrush; the two words remained inside his head, like prophylactic debris washed up, pearlescent and luminous, on a moonlit beach.

Phrases like a calendar with days but no year show the monotony of life, while the coffeepot heated up, evaporating the wetness on its curved chrome flank, show sexual tension. McNihil looks down on those less fortunate describing their hands like cockroach antennae.

Theme:
Tlazolteotl, a Central American deity combining Dionysius and Kali, is a running theme and an antagonist in the book. The deity is typically associated with dirt and sexual sin to the point where desire creates destruction, McNihil’s hotel literally burning down, so Jeter draws on this to counter her with water. This water doesn’t come from the mechanized churches, it’s comes from nature herself first in trickles, which only aggravates what becomes a sea of lust and a subterranean reservoir of lies, a false ocean, and then finally in cleansing tidal waves as McNihil’s nemesis is taken care of, society having reached the breaking point and reverting.

Tlazolteotl is sex, which the book sees as the basis for all crime, but she’s also power, resources, violence, and capitalism in one, phenomenologically reified by the polyorgyanism’s consensus uttered in moans of pleasure. But there’s another phenomenologically reified antagonist, Verrity, which McNihil wasn’t sure existed but he believed her into existence, believed truth itself into existence, to face some hard facts at risk of his own destruction, allowing for the cleansing flood and the better part of nature to flow through. The book is hyperreal in this sense and constructivist, but even dreams don’t represent reality in Noir, they represent the virtual the book states, which is an intermediary between noumenal and phenomenal in Jeter’s world. Truth doesn't come from religious or scientific texts, as the book shows both are corrupt - it ultimately derives from self-knowledge.
‍
Overall:
The book’s awesome, a complete literary triumph; I thought I knew how to write until I read this amazing cyberpunk book by the man who doesn't care much for the cyberpunk sub-genre. Many of the best cyberpunk books were written by those not intending to do so, unmotivated to include its obligatory tropes without a literary need. Jeter’s book makes it so that any bourgeois superstructure-encapsulated art snob can never again look down at our genre as being sub-par in the literary world. Cyberpunk’s not sub-par – it’s subversive, and for those who look down on great books like Noir, they can connect off.