"With enough money, (corporations) become the government in all things but name."
‍
-Elias J. Hurst
(Images belong to the author) 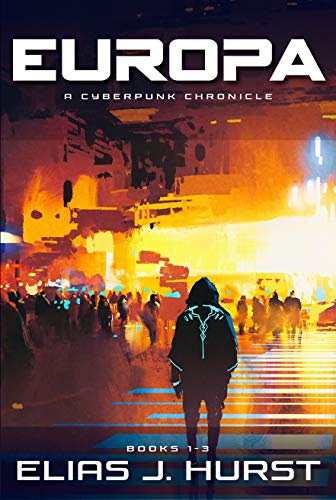 Elias J. Hurst is the author of numerous science fiction novels, including Europa: A Cyberpunk Chronicle, and who better to write sci-fi than a scientist with a background in optics, chemistry, and other areas. This review covers two of the three books contained in this collection.

Europa begins with Luka being interviewed about his mental health as he prepares to go to Europa. This serves as a great disguise for the exposition of his backstory. After an attack causes a car accident, he has a biochip installed without his authorization, providing a wealth of information. Unfortunately, others also know how much it’s worth,

“It’s time to settle your bill.”

“Okay, and what did you have in mind?” asked Luka.

“Funny you use that phrase when it's more about what you have in yours."

His mind was not a library anymore. Once it had been clean and orderly, but now when he looked inward he saw a shanty town—more wreckage than structure…

"…You are like Orpheus. You are in the underworld, trying to bring someone back.”

‍This results in anger issues; from a verbal altercation with a reporter, to a fight with Janus over callously treating the death of his publicist, he has a lot of internal processing to work through. He’s reminded of a college lecture in one scene, probably due to Emma being the victim of chance,

Probability silently shapes our lives...someone will be the victim of chance.

‍When he starts asking questions about his publicist’s death, he realizes his life’s on the line. He receives a coded message to meet an associate, Elise, in a bad part of town to escape which begins his descent into the dystopian underworld of Low City, where the maxim is Eat the Rich and people live in submerged skyscrapers just to go off the grid,

~Get Higher~ Bright pink letters floating in a smoke trail formed the slogan while vibrant blues and greens shaped the body of an overgrown caterpillar beneath it. The colors shone against the bare concrete of the decaying building, even in the gloom of the storm.

They amassed wealth with alarming efficiency, and the richer they got, the higher they moved. This was the perverse gravity of New Seattle; it pulled upward at the heaviest pockets.

‍Those looking for action will find it, but the action isn’t continuous, meaning it’s more impacting when it does occur,

The arcs of military drones flashed across the night sky as their turbines launched them toward the east perimeter. Rockets let loose in bright flares. Deep concussive rattles followed…he felt the heat of the blasts……

Security drones…moved like hummingbirds, zipping from point to point in short bursts…

…A rocket-propelled grenade…hissed as it spiraled down toward the drone and erupted in a ball of flame.

‍In book two he meets Lark, neither friend nor foe but just a necessary ally looking out mainly for himself,

Lark hated music. It agitated him. Luka tried once to put on some music through a computer in their lab and Lark threatened to shiv him.

‍Even so, Luka is conscientious of the judgments he places on others,
‍
The value of a soul was something people gave themselves, not something bestowed by a higher order.

‍Lark was the sole survivor of being born into a science experiment conducted by Daedalus Astrodynamics, the company who is associated with NASA. Without giving too much away, Luka is caught within the intersection of the corporation and the government, posing questions such as who has sovereignty over space and its untapped resources, and how far would a corporation go to make a buck,

With enough money, (corporations) become the government in all things but name.

Paragraphs are well developed, and the descriptions of body language are exceptional throughout, without seeming like they are arbitrary dialogue tag add-ons, meaning the body language is part of the experience you get when you read, which is different than just “she said, sensually.” For example,

She lowered her face down to his so that their lips were nearly touching. Silvery strands of hair brushed his cheeks. Her skin was smooth and cold and her breath was sweet as it invaded his lungs. For a moment their pupils synchronized, and they looked into each other.

‍Luka seems to become less angry and slightly more passive as the book proceeds, perhaps due to being focused on survival and being out of his element in Low City. Luka’s emotions are expressed passionately throughout the text, more so than one would expect in the average sci-fi novel, and I find it engrossing. This is coupled with fantastic metaphors,

He wanted to let the tears welling in his eyes come forward, but another voice inside him would not allow it...It called him from a dark hollow, ringing like a cold church bell…

…It burned throughout his body like a wave of molten iron crashing over him...

It was like listening to a person speak in cursive…

…The next sensation Luka remembered was that of his mind being vacuumed out of a dreamless, black unconsciousness.

‍The imagery in each section also works well, owing to these metaphors,

The modern towers were bright, monolithic structures that cast their light high into the night. Their collective glow stained the clouds above them a hazy orange…Their fragmented shapes were wraiths emerging from the night.

‍My favorite scene was the surreal one in book two, taking the best of fantasy and putting it within a sci-fi context,

Her hair, so blonde that it was near white, stood in stark contrast to the black silhouette of her figure. There was a faint yellow-white glow near her neck. It pulsed gently, reminding him of a firefly on a muggy summer night. Her eyes widened and her mouth, pulled tight just a second before, opened to say something. Luka puzzled at this. Then his vision fizzled out to static. The base of his skull throbbed…

…There were three of them. They wore ratty black dresses that whipped and thrashed in the desiccating wind. They looked like tattered flags on high poles. Their faces were painted matte white, the shade of sun-bleached bones and their eyes were lost in a trance...the resonance of the Earth moving through space, guided them…They contorted into inhuman positions...their movements (resonating) with one another…

The three women began to phase in and out of each other like apparitions…Electricity was building around them. They were creating it—drawing it in and concentrating it inside their bodies. It pulsed from them in time with their movements, like electric eels…The cloud of electricity sparked memories in his brain as it harried his biochip. Their movements flashed through his consciousness in uncontrollable waves of senses—color, texture, and emotion blended all at once…

Europa reads great. Elias takes his time to fully develop each scene. The lack of dialogue during some sections doesn’t grow monotonous. Instead, it reinforces just how alone Luka is and contributes to the overall tone and atmosphere. Europa isn’t trying to be style over substance. It’s not trying to glorify violence like typical cyberpunk vibe. It’s a serious novel that envelops you into its protagonist and his losses with a looming tension seeping through beneath each page. Read it on Amazon today!

See my YouTube channel below to see me give a reading from the book: