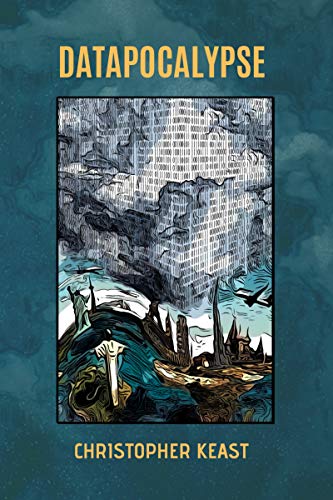 Just finished the first few chapters of Datapocalypse by Christopher Keast. The book is themed on artificial intelligence and a critical perspective on how our interaction with technology impacts us, particularly social media. The prologue throws you into the plot with an A.I. that has gone astray, fragmenting data stored in the cloud. Apparently, civilization is approaching the Bekenstein Bound (the amount of information that can be contained in a given space). At first, we’re unsure on whether the A.I. is exploiting this or not but the hints soon become more apparent,

“Like a sorcerer mixing the cauldron of data—algorithms given too much control, too much insight, too much autonomy—vastly becoming more powerful than they were meant to be, nearly to the point of unrecognizability. Thus it grew, unsuspectingly, except by its original mastermind…”

The first chapter is dialogue heavy, but not every chapter is. The dialogue serves to critique our use of social media,

“I think it’s funny,” Fred said, “all of this aggregation of pics and vids taken by people purely for selfish reasons.”

“You mean, to post online and show off to friends?” “…it () leaves nothing to the imagination: nothing private, nothing personal, nothing sacred.”

As someone who often gets caught up in documenting the moment, rather than experiencing it, someone who struggles with “being here now,” I found myself connecting with the following line,“

One thing I know is there’ll come a time when everyone hits an intersection between the times it’ll take to look at and mentally process every pic and vid they have with how much time they have left to live.”

‍All this leads into a reflection on conspicuous leisure and conspicuous consumption that any fan of Thornstein Veblen and Quinton Bell will like,“

Having great hordes of pictures and posting them online was part of an elaborate social performance—a song and dance to convince others of an ideal, therefore realistically unattainable, image of the poster. An accumulation of pictures was similar to an accumulation of wealth in economic capitalism.”

‍Keast writes smart with references to everything from Maya (illusion) in Eastern thought to Robert Thomas Malthus. He also writes smart characters,

“You mean like how the literate classes of ancient civilizations documented their view of the world and basically wrote the illiterate labour classes out of history, monopolizing their fabricated view of reality?”

When a monument that Kicis has recently photographed just disappears, the plot begins to take off, and that takes us through the first few chapters. Mass data erasure within the databases is a temporary solution. Destruction—physical or virtual—of databases and infrastructure would lead to thousand-fold more misery and chaos from a socio-economic perspective. The only true solution is to hack the AI and implant it with a self-defeating virus, rendering it inactive.

Although its tone is not exactly cyberpunk, it has strong cyberpunk themes regarding our relationship to technology and its social impacts, A.I. threats, ownership of data, and a critical view of corporations,

Private enterprises, typically large multinational corporations such as Soma, Global Electric and Junglez, who were also the owners of the proprietary databases previously filled with Operation Photobomb-targeted pictures and videos: data…Once people try to access their pics and vids, they’ll be mighty disappointed and will immediately complain to the database administrators—the corporations that own them.

She hated lying, but it came with the territory of coming out of the woodwork from being a reclusive inventor and into the glory of the corporate world.

He drained almost all his savings to guarantee his anonymity and dropped another handsome sum to drive as much online traffic to the site as possible by search engine optimizing and advertising it extensively on external websites, social media pages and news feeds in a short-timed marketing blitz. The website’s name was simple, intense and effective: Datapocalypse Now!

If you enjoy social science and A.I. as much as I do, then check it out on Amazon!