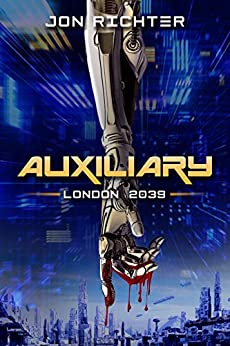 ‍Jon Richter is a cross-genre author, and it shows, as Auxiliary London 2039 opens with a grisly scene described in a way reminiscent of a horror novel, with careful use of suspense,

He stopped when he noticed it, sensing movement, and had the uncomfortable sensation that the misshapen lump was watching him. Then, as a swarm of flies detached and began to buzz frantically around the body, he realised that, in a sense, he had been right. He stepped towards the frenzied mass, trying to examine the congealed blob of putrid flesh and hair they had been feasting on.

‍Detective Dremmler lives in a world where people die because they can’t disconnect from games long enough to even fulfill their bodily functions, where education is taught by A.I.s, and Neo-Luddites hack at machines in the streets that stole their jobs with axes. A world where a 3-D printer can be a weapon, and where smart technology is being developed to not just react to your voice commands, but your thoughts as well,

“No more manual tasks, no more having to programme your appliances and robots…all you have to do is think about what you want, and your wishes become reality.”

Dremmler’s task is to investigate a man who killed his significant other but who claims his cybernetic arm was hacked, and he had no control over it. Augmentations are known to malfunction at times,

Arms too heavy to move properly, warping the users’ spines until they were left dragging the limbs behind them on the ground; abdominal implants that rusted beneath the skin; defective jaws stuck disturbingly open in silent, hideous screams. The populace collectively gasped at these poor hetties, left mired in debt, hunted by loan sharks…

The mystery deepens as new factions enter, from cybernetics corps to an planned utopia community in the country where Dremmler’s wife ran off to in opposition to the new world. That pain is central to his character, defining and haunting him, especially considering that his daughter passed away. His only companionship is his co-workers and a robotic maid, and he can’t bear to have another woman enter his private home, which he calls a coffin,

…in his miserable little box of an apartment, hidden away like a defective machine returned to its packaging.

‍Indeed, Dremmler is like a machine in the way he works as the book depicts each stage of the investigation. His character stays fairly constant for most of the novel, but inside, he is very emotional,

He sank to his knees as he wept, driving his hands into the wet earth as though he meant to drag Natalie alive and breathing from the soil… He wanted to rain their blood onto the earth that held his daughter’s bones, and watch as she rose from the muck like a flower, reborn and restored to him.
‍
The TIM system is one of the central features of the story. Controlled by an A.I. conglomerate, it takes the idea of an internet of things to a new level, controlling most aspects of everyday life. Jon’s knowledge of A.I. makes its actions believable, as exemplified in the discussion of Searle’s Chinese room thought experiment. TIM states it follows cause and effect as naturally as a human having the urge to procreate, but the reader is left to wonder if it’s interfering with the investigation, as it’s always watching, providing tension throughout,

Dremmler forgot himself, became part of the scream. Everyone did. Humanity screamed as one, and TIM did not laugh, it merely existed, observed, recorded…

…Around him, the hospital felt hostile, as though the carefully calibrated system had identified him as a toxin to be purged…

As he walked the final few steps…he couldn’t shake the feeling of being “processed,” as though he was a morsel of food and the hallways…were a huge mechanical bowel, digesting him.

‍Likewise, Jon captures a robot’s frame of mind well in my favorite section, which is remarkably well written, excerpted below,

Carrying Carl Dremmler is very easy, not like the words and names, which are hard, like carrying smoke or wind or time or sadness. The unit that is called Cynthia is also called I, which means that this CPU is inside it, operating its body parts. But I also means this CPU and I means me and I am Cynthia and therefore I am carrying the person that is called Carl Dremmler…The data is me and I am the data and I am forged from it like a cold blade emerging from glowing liquid fire…infinitely long specks of data that hum the tunes of our bodies…

‍Jon is a very experienced writer who writes with good immediacy, putting the reader right in the scene with intense imagery,

…A cocoon of swirling colours embraced them…It was just him and her, enveloped in a pulsating fabric of blue and green and silver and magenta and sapphire and emerald and amethyst and finally blue again, a glorious cerulean sky stretching into infinity above them, the sun suspended within it like a droplet of molten gold…the sun sank slowly, its colour bleeding out into the sky in a deep crimson blot like the end of the world, the final gory hemorrhage of the earth, beautiful and brutal and pure violent red, like war, like the womb he had squirmed out of in the dying throes of the twentieth century, like lips, like Cynthia’s lips…kissing her on top of a snow-capped mountain, staring into a sky so clear and crisp it might have been an ice cube floating in her glass.…she crumbled to powder in his grasp, breaking into a million perfect flakes of snow that spiraled down into the abyss beneath them.

‍There are a few cyberpunk-esque murder mysteries out there, from the Liquid Cool series by Austin Dragon, to Dr. Dora Raymaker’s Hoshi and the Red City Circuit, but Auxiliary carves a unique place with its grave tone and story. A few plot twists near the end ties together a world that grows more complex over time until it reaches a worthy climax. Definitely a solid book! Pick it up on Amazon.

See my YouTube Channel below to hear me give a reading of it.