Into Neon: A Cyberpunk Saga - Interview with Matthew A. Goodwin

"The rise of social media has left people feeling both more connected than ever, and more isolated..."
- Matthew A. Goodwin 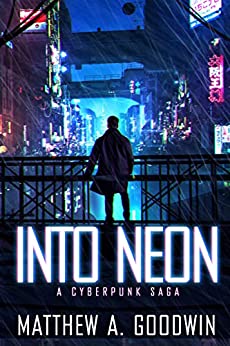 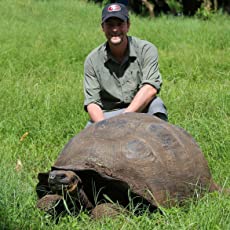 Into Neon is the new cyberpunk book by Matthew A. Goodwin. It begins with Moss, an employee working for ThutoCo, experiencing the ocean in VR, even though he’s never been to it in real life. Moss lives a very sheltered life, with limited understanding as to how people lived outside his building since he never left it. A cautious, analytical individual, he has limited social connections as illustrated,
‍
His implant’s irritating him. He had asked his friends if they felt the same way, but none did. Though he had to admit to himself, the sample size was small.

I asked Matthew, “How does Moss’s name relate to his character? I think moss and I think something slow to grow, slow to spread out, in the bottom rungs of society.”

He replied, “The second book in the series [Corroded Cells] explains why Moss was given the name by his parents but I liked the name for many reasons. As you say, moss is slow to grow but it also denotes a sedentary lifestyle. Moss has spent his whole life sheltered, doing little more than working and even his name indicates that. But I wanted his name to evoke nature as well. He is amazed by the natural world and I liked the dichotomy of a name based in nature with the sterile and mechanized world he inhabits at the onset of Into Neon.”

Moss lives in a hex, a corporate-controlled apartment tightly nested into surrounding units like a hive, and indeed that is how the corporation perceives him – as a common worker bee. ThutoCo tracks his movements and communications throughout the day to ensure he’s working. The company feeds the world, but its slogan is death is the price of life.
‍
I asked Matthew, “How does death is the price of life sum up the corporation’s viewpoints on the world and how it uses resources and control?”

He replied, “Due to the relative luxury which ThutoCo provides its employees, I needed to establish early that the company had a dark side and was willing to put the bottom line over human lives. In a corporate controlled world, the companies are governed by their own internal logic rather than the laws to which we are accustomed. As such, ThutoCo’s monopoly of power and food in the western world puts them in a dangerous position of power. The line also serves as foreshadowing.”

A TV displays Moss’s work productivity points each morning. Get enough points and you level up, gaining access to new transportation options and larger homes. Points are deducted for doing things like cursing and rewarded for working hard or just for submitting to company inspections that would be illegal in most societies without probable cause. Moss is disconnected, despite being around his co-workers all day in tight surroundings, as illustrated when Moss is attracted to another employee. Instead of hitting on her, he orders a robotic replica of her to be made to have physical relations with for “relief.” Even one of his coworkers is an A.I. version of himself.

I asked Matthew, “In your book, Moss is very disconnected from the world and from everyone except a few close friends. Do you see people as becoming more isolated in society in real life as well? How does technology increase or decrease our social isolation?”

He responded, “Cyberpunk often serves as a cautionary tale about humankind’s relationship with technology. Corporate greed and technology isolate the common man, strip them of their humanity and leave them powerless. I sought to ask questions about man’s relationship with machine in my series without trying to be too heavy handed because technology can serve to connect us as well. The rise of social media has left people feeling both more connected than ever and more isolated and I find that dueling experience fascinating and heartbreaking. Seeing people with their phones constantly glued to their hands, I imagined my world to have simply taken the next step: palmscreens, lenscreens and neural communication are all logical extensions of our current technology. As one will see in my books, there is an inherent peril to this as well.”

When a mysterious woman, Ynna, shows up who knew Moss’s family, his life is turned upside-down. He thought only ThutoCo knew who his family was. Over time he suspects they might have erased his memory of them, perhaps to make the perfect employee with no attachments. And indeed, he never took a sick day, not to care for an ailing parent, not to care for a sick child. The scene when Moss meets her is particularly well written,

“Tonight, you take this to me at a bar in the city” and she extended a robotic hand out to him, the metal fingers unfurling like the legs of spiders to reveal a data chip. He stared at her hand, the crude exposed wires, gears and rusted bolts. He had never seen anything like it. Any prosthetics he had seen were near-perfect recreations of the human form. The Relief Aides were nothing more than metal, silicone, and plastic wrapped in a polydimethylsiloxane skin, yet to touch and see them, they were as real to him as people. Her hand was more drudge than a person.
“What?” he asked. “Why would I take it? You take it.”
She looked at him pityingly. “I can’t take it. I barely got in here, there is no way I’m getting out with ThutoCo technology. But you can.”

The cautious Moss is provided an unusual ability and is thrown into the underground world as exemplified in the following scene before a fight ensues,
‍
The ensemble was completed with a tattered leather jacket with small metal spikes running along the shoulders and down the arms with patches covering nearly every inch. Her neon pink microdyed hair shimmered with silver like a cascading waterfall. Black eyeliner smudged with sweat encircled impatiently expectant eyes.

‍The book is cautious at the start, as is Moss, but over time the writing becomes outright cyberpunk,
While the drudges in the field were hulking robots, designed to withstand the elements, the office variety were much more human in their design. Their form was that of a person, though skinless and mechanical, all polished plastic and metal. Their heads had a screen where the face would be. Most managers used it to display information, but which others had a computer-generated human face display.

And the excitement accelerates,

Just then, a soft buzz filled the air as two drones dropped from the dark sky above with scanners making grids on the street… (He) slid the jacket from his shoulders. It exposed a metal box that was fused to his spine, part of it jutting through a slit carelessly cut in his vest. It was military grade headwear but if he had acquired it new, those days were long gone, rust and blood mixing where metal met flesh. He manipulated some commands on a cybermesh palmscreen and small flares fired from his back toward the drones, leaving streams of white smoke in their wake. The drones bobbed out of the way like fighter jets avoiding anti-aircraft fire as he continued to tap at his palm. “Got you,” he muttered as the palmscreen flashed green before displaying a view from one of the drones which he controlled to fly directly into the other.

‍Moss is exposed to new points of view even though at first he defends the corporation that controls his every move, which shows the author has a real understanding of how power works to manipulate people from within,
‍
These ‘representatives of the people’ are little more than Royal Families. They all stay rich while we stay poor, slaves to greed. Anyone who had been left in the middle after the wars were sent to colonize the Great Black.”
“But we aren’t slaves, we are employees,” Moss said, resenting the implication.

‍I asked Matthew, “The employees don’t see themselves as slaves – they are alienated from their class consciousness if you will. In what way do you think this relates to the real world?”

He replied, “ThutoCo employees who live in the burbs are better off, in many ways, than the average citizen living in the city. They have all of their needs met (food, housing, even entertainment) by the company. What they exchange for this is their freedom to do anything else. They live their entire lives at work. This relates to our real world in a few ways. With the rise of cell phones and the internet, many people are ‘on the clock’ even when they go home for the day: managing office squabbles, answering emails or representing their employer when out with friends. For many, work bleeds into or consumes their every waking hour. It’s not a far cry to imagine a world where people would dedicate their entire lives to their jobs in exchange for amenities.”

Into Neon holds true to cyberpunk values. Cyberpunks are watchdogs, monitoring the corporations that are monitoring them, in turn. The literature is easy to read and delivers on multiple levels. It is a throwback to the first cyberpunk book Dr. Adder by K. W. Jeter in ways, from the cybernetic arm to the corporate ownership of businesses and the objectification of employees. Check it out, then read the rest of the series! Available at Amazon.
‍