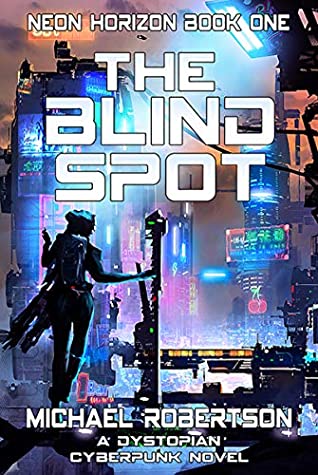 Just finished the opening chapters of The Blind Spot by Michael Robertson. It reads well! The story follows Nick and Marcie, and so far Marcie is the more interesting character. She’s the young daughter of a crime boss who keeps egos in check and cuts the fingers from hands who reached out too far. Yet, at the same time, her father’s been over-protective of her until now as she turns sixteen,

“For my tenth birthday,” Marcie continued, “you gave me a metal skeleton that grows with me.”

Marcie’s augmentations let her slide down walls and kick off skyscrapers while also curling up into a ball like Samus in Metroid,
‍
The tick of grit in the air peppered her glasses, and the wind sent her ponytail out behind her like a streamer as she ran down the mirrored dome at the top of the Apollo Tower…arms. She’d modelled her suit on a flying squirrel—colour and all—the wing flaps filling and turning her into a glider.”

The Blind Spot is an impoverished area of the city with one huge advantage – it has no surveillance. A terrorist attack in chapter one escalates the tension between the haves and the have nots. The city’s described well with lines such as,
‍
Hovercars zipped around like flies on amphetamines.

Augmentations are just plain cool the way they're described,
‍
‍The wind slammed into Marcie, her legs working overtime to counter the effects and stop her being thrown to her death. It didn’t matter what cybernetics she had, nothing could compensate for a fall of over one thousand metres…Hundreds of tiny adjustments, micromovements, small twinges, they fired from the top of her thighs to where her ankles met her feet. It had taken her years to trust her synthetic parts, but the microprocessor’s calculations were always better than her own.

The book keeps well within cyberpunk's themes,
‍
“They’re telling them that corporations like Wellbeing Incorporated are bigger than the government. That they can do what the hell they like because they run the city.”

The entrance looked just like any other street, if maybe a little wider. It also had neon lights flooding out into the city, a multitude of garish signs advertising a multitude of sins. A guard stood on either side of the entrance. Both were cybernetically enhanced freaks who’d been built to tear heads from torsos when they ran out of other options.
‍
‍Looking forward to continuing my read!