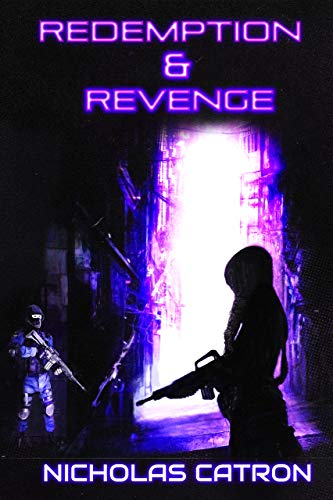 Redemption and Revenge opens with Tamala contemplating suicide after losing her family and most of her life. When Valentina, a young girl, goes missing, she’s soon thrown into action. The culprit, Stimsec, is a mega-corp known for forcing people into slavery. Stimsec rose during the fall of the U.S. when corporations became sovereign entities the way countries used to be, free to act without government oversight.

We don’t obtain much information about the world or the corporation early on, but part of that is what Tamala is trying to figure out – why did the corporation kill her family and leave her alive? Later, we learn they’re a medical and weapons producer primarily, but this only scratches the surface of what they’re up to. The ensuing fight and the quest to rescue Valentina reminds her how much she needs to live and gives her a renewed sense of purpose,

StimSec may have stolen her life and her family, but she wouldn’t let them take Valentina.

Tamala is forced into situations which bring out a ruthless woman, as she turns the table from hunted to hunter, at times acting preemptively. Her actions are more than some calculated revenge, however, they are personal and emotionally charged from what she’s lost. She can’t let go of her husband and daughter being killed. When she’s attracted to Valentina’s father, Marek, for instance, she considers the feelings inappropriate, showing good characterization as she grieves,

She tried to ignore the fact that he was handsome and had a beautiful smile…She ignored all the feelings of affection that had crept in over time, because all those feelings were wrong.

‍The story is told from all three characters’ perspectives, but the environment has created a cynicism that seeps into each of them in their own way, such as the following scene showing Valentina’s outlook,

Tamala couldn’t help but wonder what life had been like before the Great Divide. She knew the history that StimSec had taught her, but not everyone agreed with it. Especially those living out in the Wilderlands.

“Did you know, that long ago, before the war, people could live wherever they chose...

”Valentina looked up and smiled. “I don’t think that’s true,” she said. “I’m pretty sure everyone was just like us, scared of someone killing them for their stuff.”

“Why do you think that…”

“It’s human nature to hurt each other… It’s our one great constant. Violence.”

The same dark outlook is echoed from Tamala, and the relationship between the environment and our perception is well detailed in the book,

The day passed by, shadows stretched and advanced, and before long she found the shadows had taken over completely. She had always thought dusk beautiful out in the Wilderlands. How it would blanket the land in a soft gloom and bring with it a chill air that smelled of pine trees and life. She couldn’t smell any of that, and the dusk looked more like a shroud than anything else.

Tamala is a rogue with few allies, but she’s willing to sacrifice for each and every one. Parts of the book read like Fallout and others like a modern Tomb Raider, as she stealthily distracts and takes down foes, or deals with animals as illustrated,

She dropped her injured arm and found the knife, still in its sheath. Jerking it out, she thrust the blade up, as hard as she could, deep into the animal’s throat. It yelped and tried to throw its head back and away, but she grabbed its fir and pulled it down until flesh hit the hilt. Its ragged breath mingled with dripping saliva and blood raining down onto her face.

‍The imagery works to convey a sense of a hopeless, dystopian wasteland,

She stepped through an empty doorframe into the building. Light diffused through the broken windows and bathed the dusty interior in a luminescent glow. Metal cages with wheels were scattered…

…The rest of the building, from what she could see, had been gutted and replaced with a multicolor sea of tents, tarps and plastic sheets stretched across poles...A hive.

This makes the futuristic cybernetics lab eerie by contrast, and the mystery surrounding what’s being done there is one of the most interesting parts of the book. Inside the lab the non-stop action is replaced with a slow suspense that is a welcome reprieve,

“Hello? Is anyone there?” She raised her voice as loud as she could without yelling, expecting to hear it echo or resound off the walls, but no. Nothing. Her words were as flat as a sheet of paper and as soon as she said them, they were gone. As if the walls ate them.

‍The world-building works best in situations like this that show the character’s naivety to what we take for granted,

Columns of glass rose up in the empty space, connected to the inner walls, with fast moving platforms inside of them. People stood on those platforms, being carried up or down, and stopping every so often to let the people on or off. She had never seen anything like it. “What are those?” she asked, pointing to one of the columns.

‍While much of the book reads post-apocalyptic, these sections with Valentina are where the cyberpunk elements really start to become apparent, from mega corps to cybernetics,

A buzz of chatter filled the air as people in white smocks and uniforms busied themselves with their work and small drones, no bigger than hummingbirds, darted this way and that. What they were for, Valentina could only guess. Four-foot-high glass cubicles zigzagged throughout the space, holding people with glass black eyes, all moving their arms and hands in intricate patterns, none seeming to be aware of their physical surroundings…

…“What about the black eyes?”

Dr. Freeman chuckled. “They are connected to our cloud network. Those ‘eyes’ allow them to fully immerse themselves, working in a sort of virtual reality.

‍Later, as Tamala explores the digital world for information, the cyberpunk elements come to full fruition,

She’d had her eyes replaced with top of the line adaptive lenses. With these, she could access the cloud network without an external interface. It also allowed for augmented reality interactions and a heads-up GPS display……The grinder had given her a new Personal Protocol Identification, upgraded her cloud interaction software and installed some new intrusion programs…Exploding through the computer-generated digital matrix, she let herself cut through the very code that created the visual landscape, breaking into adjoining networks and leaving gaping gashes behind.

Redemption and Revenge is an action-packed cyberpunk thriller about what happens when corporations are allowed to reach self-actualization without restraint and pursue the right to their own so-called happiness, as told through themes of family and sacrifice. Some editing and immediacy issues are present but don’t distract much from the story and become less prominent as the book progresses. The book throws one immediately into the fray, without a gradual exposition of narrative and world-building. Cyberpunk fans will love this pace, but traditional science fiction readers may find it somewhat jarring at first until the world is explained more. Those who like face-paced technothrillers with a small cast of straightforward characters will be entertained throughout this debut, which belongs in any cyberpunk library. Available on Amazon.