Hoshi and the Red City Circuit - A Review 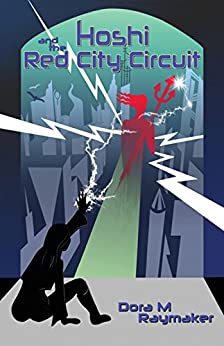 Dr. Dora Raymaker is a Research Professor at Portland State University’s Regional Research Institute for Human Services, Co-director of the Academic Autism Spectrum Partnership in Research and Education (AASPIRE), and associate editor of the journal Autism in Adulthood. She is an active human rights advocate and works to help people who are neurodivergent reach self-actualization. She is the author of the 2018 science-fiction book, Hoshi and the Red City Circuit.

In the 26th century, an enslaved group of neurodivergent people run a supercomputer to direct the Red City’s processes, until three of them are murdered, their bodies painted with quantum code. Hoshi Archer, having escaped slavery into a world where the chains are merely invisible, must investigate what happened in what begins as a murder mystery and ends in pure science fiction. The book is non-violent overall, though there are action scenes dispersed throughout.

Hoshi’s name means star, a fitting name since the human diaspora has reached far into space. Her last name Archer may refer to the Sagittarius constellation, thought this is just speculation. Sagittarius is associated with traits that Hoshi has – an obsession with freedom, a well-tempered even judgement, and a high awareness of situations with great attention to detail. Tarots are referenced in the book, so this was perhaps the author’s intent with the naming, though the text is far more scientific than mystic.

Dora uses Hoshi to not only drive the story, but also to promote an understanding of neurodiversity, given that Hoshi has both exceptional talents and limitations. Hoshi is a complex character who is always on the outside looking in. She has had a difficult life. She has been the victim of at least one hatecrime. People say things like, “I think you underestimate the severity of her impairments” behind her back, and Hoshi herself comments later, “They don’t realize what it’s like to be spoken about instead of being spoken to.”

She times everything down to the second (even pauses in conversations), loves getting drenched with rain, has difficulties ending conversations, is so minimalistic she can’t stand to even own furniture, and doesn’t like being touched by strangers. When she messes up a conversation she doesn’t always understand why, but just has a bad feeling that needs processing. However, one of her quirks, enjoying the sound of leaning back and thumping a chair against the wall, gains her a valuable clue. Her eccentricities makes her a memorable character,

I counted (rain)drops, factoring their dynamics. Did they converge on a single inevitable end, following a fixed-point attractor? Or were they ultimately unpredictable, chaotic in nature? I decided it depended on how I looked at it. Each drop behaved chaotically— too many tiny variables involved to clearly determine each exact rivulet’s path from cloud to ground— but as a whole, they always filled the same small basin of puddle.

‍Hoshi has K-Syndrome, which in the book reads very much like Autism, from the social-pragmatic difficulties, to the comorbid sensory issues, and the higher visual associative I.Q. Yet the words, “autism” and “autistic” do not occur in the book. Dora’s writing accurately conveys the autistic experience as exemplified in the following scene. When Hoshi opens her door to a visitor, Sorreno, she realizes something is wrong,

‍The scene is convincing, as it shows the complete calculation that Hoshi performs which produces contradictory results that end in her just swaying and saying nothing. The calculation is enhanced by the word “null,” a property of an empty cell in a dataset, not the way one would normally describe being at a loss for words. This is not to say that her emotions are calculated, as she is remarkably human, but she ruminates, processing things over and over,

I sat motionless, cutting the programming that would have moved my flesh into an expression. My thoughts got tangled in my feelings, making my linguistics slow to figure a response...I really needed time to process…

Aided by a navis (what Dora calls a ship for the info sea), when connected to the data world Hoshi has the ability to split her mind into threads that can perform and coordinate different investigative activities. The story then takes the viewpoint of each scion. This narrative technique is highly original as we see scenes through a trichotomized perspective of a single person, allowing for a first-person perspective without reducing the freedom of narrative. Halfway through the book it is taken to its full advantage as Hoshi’s consciousness splits four ways at once, each looking through a spycam into four different situations – obtaining a panopticon that not only is awesome, but also reinforces Hoshi as the woman who sees the world in an isolated manner, from outside it. This is a narrative technique that makes a major contribution to the genre, and one that I hope authors do not overlook.

I cut my sense of vision through the camera and waited until I felt the information moving through it like sunlight on skin. Warm. Almost subliminal. And more— a tingle, the barest hush of electricity……Most of the night’s information overflow had jammed itself into the pits of my subconscious, where there was room for it to writhe and process far from my conscious functioning.

Hoshi is abnormal, but not ashamed of it,

I hated the normies for not understanding what they did to us when they forced us into their world. Why were we always the ones who had to compromise? What gave them the right to decide that they were healthy and we were flawed?...…Realistically, I have unique insights into motivation because I’m not blinded by the same assumptions normals make.

‍There are multiple references to Dora’s background in systems theory throughout, from second-order cybernetics (closing the circuit as the book references in what I suppose is self-referentiality to garner greater sentience) to Hoshi’s religion,

I sent a silent prayer to the Trinity of Signal, Encoding, and Noise… …The irrationality of human thought is the only way to create effective encryption……Structured lattices folded into fractals which dissolved into chaotic haze before becoming lucid again, whorls and weaves and explosions of geometries and colors and patterns: quantum code. Or, what code would look like if it only used visuals instead of a full sensory space, and its multi-dimensionality was flattened to cover the surface of human skin.

Dora herself used to be a coder, and her blog reminds me of Hoshi’s voice,
‍
“Yeah, the worst is when I have all my code landscapes lined up, and the colors in the right place, and I’m just about to start moving them around, and ka-pow! Some manager-type comes up behind me and I lose it all,” I moaned.

“You know how you see your code all around you, and you’re about to move it around? Like it’s all set up in your visual field?” Surely they understood?

An addictive drug, NQ, is mentioned in the book as a key element to a series of crimes. Taking it increases communication at the expense of systematically operating the navis,

NQ…is nasty business. For 99 percent of the population it’s just a mild empathogen, increasing feelings of connection and communication with others. But for Ops it gives us the ability to function without our tech, to remove our machines and superficially pass as normals. The stuff increases verbal and motor processing, allows an Operator to ignore sensory overload, and gives a massive rush on top of all that. It’s the only way to effectively hide what we are.

Beyond the investigation itself, the élan vital are an alien race operating from behind the scenes that continually bring a deeper mystery throughout the book. They bring a Shadowrun: Hong Kong feel to it, complete with feng shui references, resonance and feedback, and dragon ley-lines.

At any moment, Hoshi’s rights could be taken away, an idea repeated throughout the book,

Freedom for normals meant the ability to make choices: freedom for Operators only meant the ability to make the choices normals wanted you to make……He didn’t know how many of my freedoms had been denied under the false aegis of protecting me; he was used to taking freedoms for granted. …They want us spending all our time maintaining their technology so we don’t get big ideas about superfluous stuff, like civil rights. Just because they feel bad about the slavery doesn’t mean the normals want anything to change…

‍Although the writing is sci-fi with peripheral cyberpunk tonality, it also contains a poetic intensity,

Through the crackling blue channel I leapt and slipped into the city’s sensory organs, the rush of power and the crush of insignificance that comes of seeing all and touching nothing, of existing both as an immortal city and an inconsequential human psyche, the mingling of these extremes in an alchemy of egoless panic that resolves, explosively, into peace……The majority of my consciousness was busy with encryption. Blue hexagons rode roaring slivers of pecan into an oily sonata of rainbows, interrupted only by a densely-woven envelop of variegated loops of logic folding in on themselves to cover the warmth where a key might fit...

‍And perhaps the most truly cyberpunk description of intimacy ever written,
‍
A radiation of light and gentle humming emerged in the center of our shared space; the edges curled delicately inward, creating a loose cup. Then it began to rotate with the tinkling of chimes and a cool sensation flowed over me of gold and lemons in the complex synaesthesia of the Mem’s programming language.

‍Dora toys with reality in the book until you’re wondering if the real world itself is virtual, or whether it is simply a false-dichotomy, Not a “virtual” reality, but an actual reality, one made of electromagnetic signal, information encoding, and the occasional degradation of noise.Indeed, real-life geographers have written scholarly articles on whether cyberspace is a “space” or a location at all. Ultimately, what we call reality is what we process through various cognitive modules with inherent biases and limitations. It’s all virtual. It’s all real.

The book provides the idea that perhaps at the base of reality there is a computational matrix, the yin and yang of binary code, or as Dora writes, On-off is the difference between light and dark, between being and not being...The Mem, you know, is the same thing as the spirit world, just seen from the other side of technology’s veil.

Hoshi and the Red City Circuit is a fantastic book with a gradually increasing pace, and a fantastic ending that leaves a satisfying feeling as each of the book’s threads are neatly tied together. Check it out, and the upcoming prequel, Resonance. Spectacular!