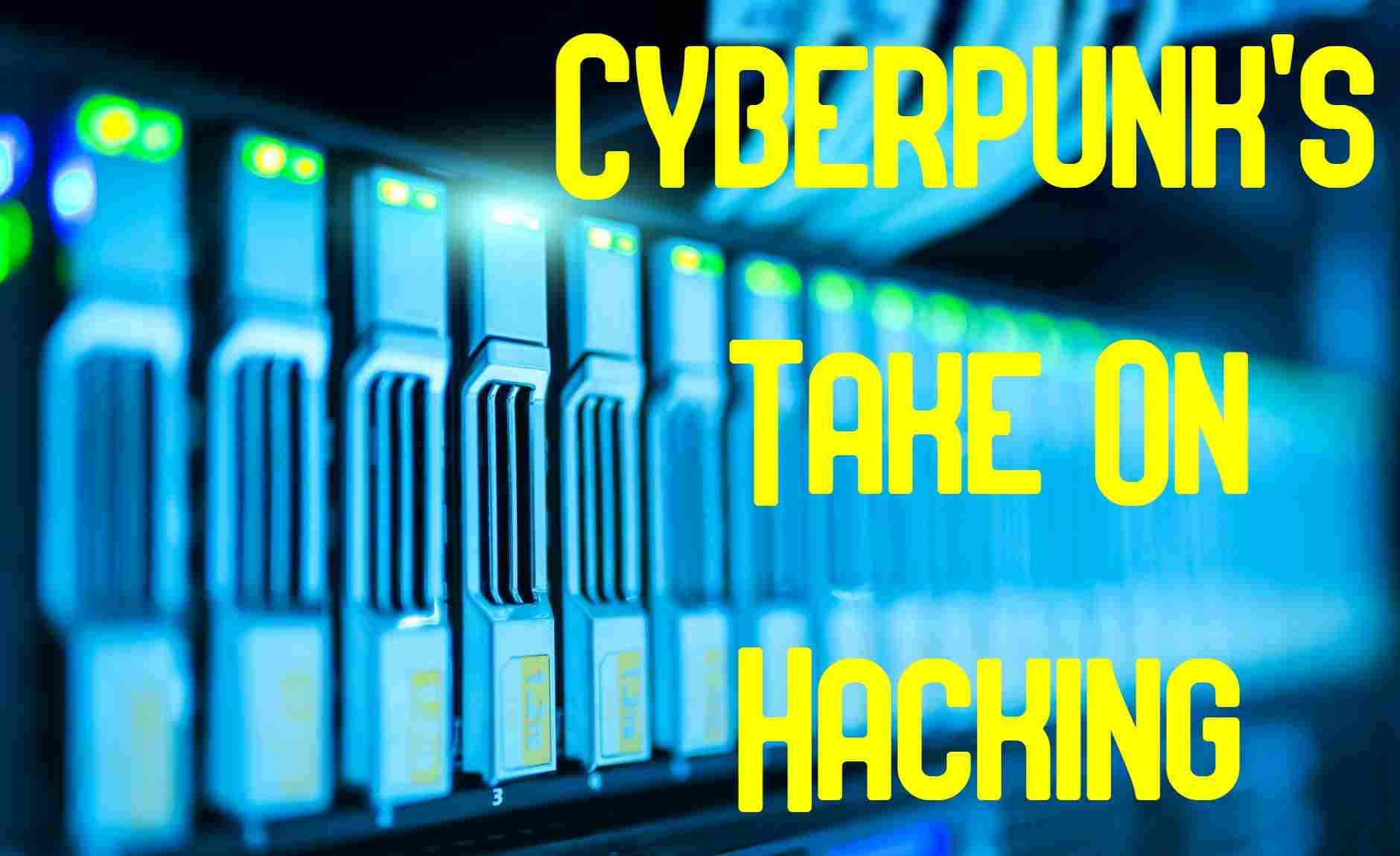 “The new hacking undertaken by cyberpunks alters the body, alters identity, and so too society. Everything is hackable.”
--Dr. Joseph Hurtgen

‍
Recently, we examined cyberpunk's view on advertising, corporations, and cybernetic augmentations. Today we examine its take on hacking. For years, before the internet even went public in 1991, hacking was a central trope to cyberpunk with the core maxim information wants to be free as stated in the Hacker’s Manifesto. That text drew from Rosseau and Marx with both its idealistic vision, and implied warnings to society. I reiterate, that doesn’t mean cyberpunk is inherently liberal.

As cyberpunk author and critic Dr. Joseph Hurtgen puts it, The power of archives is connected to economic power, which generates anxiety...in society's powerful institutions. The archive as socioeconomic determiner is most visible in Gibson, allowing for both control and resistance. For example, Johnny is a slave to corporate systems until he learns how to hack, allowing him to sell information to the highest bidder.

‍Let's look at how 21 cyberpunk authors write about hacking!
‍ 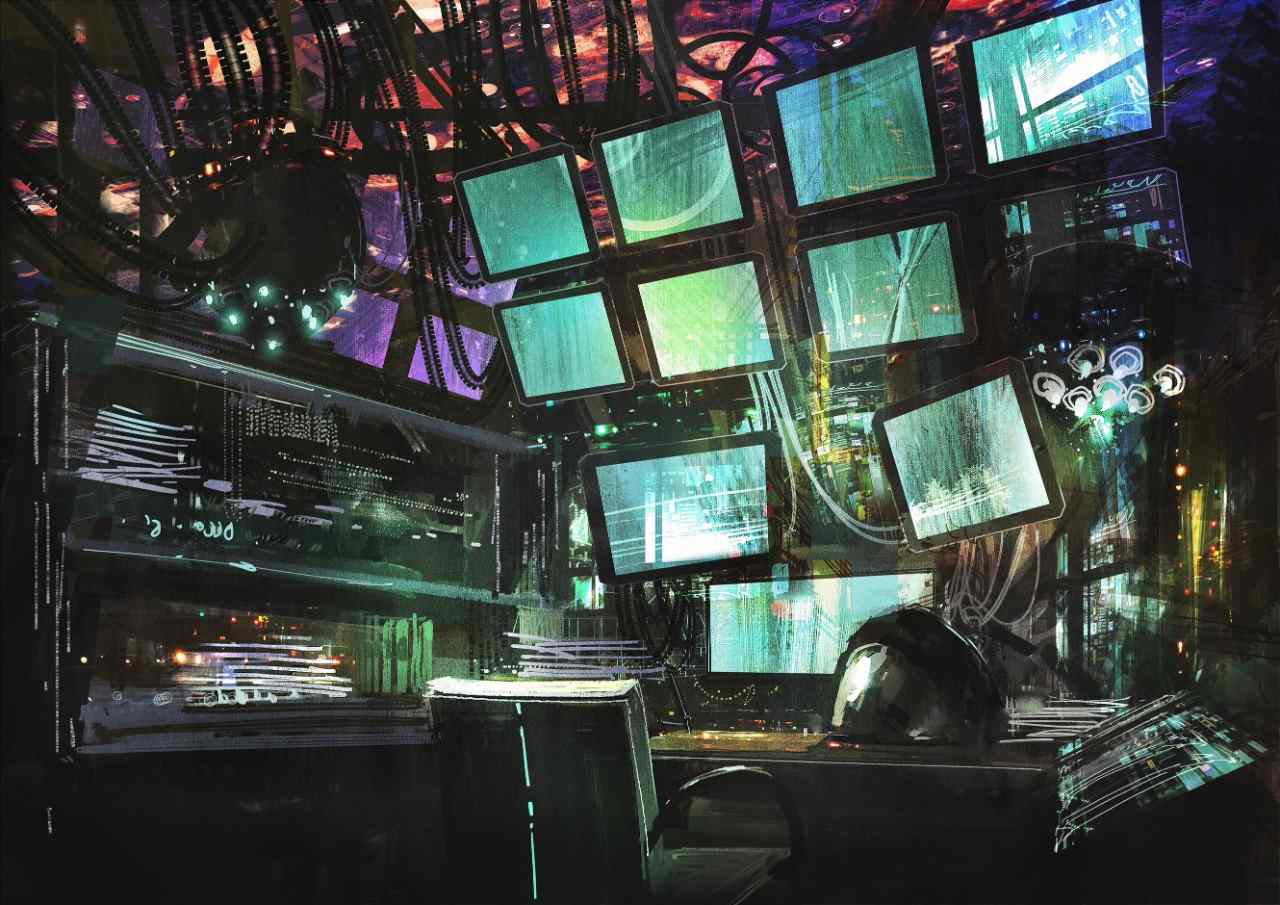 When she was a little more lawful, Dr. Kandry had been a recognizable name in the field of cybernetics. Her research had helped to develop new ways of hacking the brain and enhancing the intertwinement of human and machine. Of course, when she was caught stealing cybernetic parts from Walker Global and selling them for personal gain on the black market, and was subsequently fired, the praise around her name fell a little.
--Max McCamish, Arc City Stories (a cyberpunk anthology)

Mass data erasure within the databases is a temporary solution. Destruction—physical or virtual—of databases and infrastructure would lead to thousand-fold more misery and chaos from a socio-economic perspective. The only true solution is to hack the AI and implant it with a self-defeating virus, rendering it inactive—dead, in biological terms.
--Christopher Keast, Datapocalypse

The security system in the building would have alerted the police to the break in and the commotion, but hackers working for the corporation prevented the communication.
--Tanweer Dar, The Demon

He was a Net Flyer. He could hack anything He was the one who created her banking system to enable her to hide her illegal earnings in multiple accounts, making the transactions look legal.
--Todd Cinani, Arc City Stories (a cyberpunk anthology)

Suit maintained a connection with Alice’s visors and updated the feed with an abstracted view of the hack. The door surveillance systems were rendered as a yellow spiked orb, Suit as a silver hornet. With a buzz that sparked the haptic feedback in Alice’s jacket, Suit took flight, approached the orb, and landed on one of the razor-edged spikes. Alice watched the hornet’s ovipositor flex and move around as it tried to find a weakness in that surface. It failed, took flight with another haptic buzz, then landed on a different spike. The pattern repeated— Suit failed to find an injection point for the virus it was carrying, so tried another spike.
--Jim Keen, Pattern Spec

She winces, feels the effect like pins-and-needles all along her limbs, dispatches her own icepick more or less at random, buying time. It slides harmlessly off the Mayor’s IC(E), kicking back painfully into her palm. She feels the jolt of it to her elbow, but readies it, and another, a different program, heart jolting against her ribs. She can taste adrenaline, and fear, knows and doesn’t care that the lurkers will feel it, too. There’s no time to worry about it: the Mayor’s clawhammer probes again, and she calls a secondary codewall into existence, reinforcing her defense.
--Melissa Scott, Trouble and her Friends

Sebastian and I had cracked more advanced systems, and customers at the Vault were always locking themselves out of their accounts. I pulled the touch screen on my ARO, booting up the decryption tool-set I'd cobbled together over the years. It connected wirelessly. As I suspected, the encryption was basic. It didn't need an algorithim. My ARO brute forced the lock with superior processing power, and the panel flashed green. I couldn't hide the smug look as I faced Karin, (who said), "Okay, I"m impressed."
--Ben Winter - Latent State

Shadows dance in the periphery, shivers rise up her spine, a spine that coils like a snake searching for predatory hawks. Unable to withhold curiosity, she looks behind. The street doesn’t worry her, it’s those basement staircases, parking decks, garbage incinerators, roof accesses, dronerelease panels, broken airbus tubes, and piles of used medical equipment; the alcoves of the city. She pulls out a portahack console, wire dangling in the street sludge, but she just blows it off, raises her hair, jacks it into her cog with a whoosh, and taps into the satellite array. VHUD picks up on one, two, three satellites marked in red across the sky, yet invisible to the naked eye.
--Mark Everglade, Hemispheres

“What about the camera above the door.” “Disabled. For now.” Arjun looked at Leon’s augmented arm. “You hack? Jack-leads?” He tapped a finger to a temple port. “Get a Net-Enabler. Costly implant but quick. Runs off brainwaves. I can source one. Cheap. And a new limb. Install them both too.” “No.” Leon pointed at the door. “Just get me inside.” Arjun tugged Leon’s coat. “One thing. I can get you inside. No problem. But what’s your game? Credit theft? Data hacking?”
--C. Beams, Revenge in the Sprawl

Security cam footage from the dockyards— hacked and leaked to the public and viewed millions of times—of Tommy’s homeboys taking out a police squad had earned them an insane level of notoriety.
--D. L. Young, Cyberpunk City Book One: The Machine Killer

I went VR, the carrier wave whispering through my wetware, hooked in through the phreak, sensim engaged. The phreak hacked into as many wifi signals as it could find, giving me greater bandwidth, creating an offsite data gateway, cycling through random IP addresses in unreality to mask my signature. The drugs began to take effect, the nootropics sharpening my focus while the psychotropics and hallucinogenics allowed my mind to embrace and surf a tsunami of overwhelming data. I pierced the shimmering Veil and sank into the Deep like a junkie shooting heroin, finding my nexus, using sheer will to reshape it, transforming it into digital dharma. I let the wave form embrace me like the arms of a lover, the tide of information flowing through me as chi compelling me to tantric nirvana. The sensation as I pierced the shimmering barrier past the Veil was overwhelming, orgasmic. Nothing in the real world could give me that feeling, the initial interface creating the ultimate, reflexive high, flooding dopamine into the nucleus accumbens, the hedonistic pleasure center. Yeah, it was that fucking good.
--Mark Harritt, Entropy Angels

Cortex’s analytical engines supervised the whole delivery chain: from China, across the Pacific and Atlantic oceans, and up to Brooklyn. It was unhackable. Except Five Points had done just that, found a crack in the armor somewhere that allowed them to peel away select packages with no official record. That was a skill in high demand, the one percent craving privacy above all else.
--Jim Keen, Contact Binary

Now for the keypad. She knows the model; a wrong guess will emit a killer shock, but she has no intentions of guessing. She tongues the back of her throat and hits her modified uvula three times to release a small cylinder from a thin, flesh-covered compartment. Retrieving the two centimeter hack-tube from her mouth, she balances it between her lips and leans forward to connect it to the keypad with a kiss. The hack-tube blinks red and shuts down.
--Mark Everglade, Hemispheres

‍When he had first met Ynna, she had hacked his implant to allow him to hear the orders others thought. If he could hear them now, it could only mean one thing: the voices he heard were ThutoCo employees.
--Matthew A. Goodwin, Digital Walls

“You...have been using me like I was one of the robots out of his factory. You move me around like a piece of furniture, you even try to reprogram my fucking brain, and you ask me if I’m okay? You know about that...circuit in my head, knowing about this machine..."
--Lewis Shiner, Frontera.
‍
Layleanna knew when she dreamed about losing control of her cybernetic arm it would result in a sleepless night. The hacking had left her unable to trust anything other than her own flesh and blood.
--Amber Benbow, Arc City Stories (a cyberpunk anthology)

"I found a patsy, a loser, hacked his fucking brain. You might call it the perfect crime. They'll never know I pulled the trigger."
‍--Eric Malikyte, Ego Trip (Neo Rackham Book 1) (referencing protagonist being hacked).

It was not an explosion that blew their car off the road which meant the source had to be a repulser—a momentary but massive magnetic wave that injected a viral code into the car’s battery array. It was the only device capable of hacking the fail-safes while simultaneously hitting with enough force to send a car into a violent roll. It was high-tech weaponry and expensive enough that he thought only government-backed forces had access to it.
--Elias Hurst, Europa: A Cyberpunk Chronicle

“You’re saying you believe McCann. But that means you believe implants can be hacked. You’ve got some, too.” Petrovic shrugged. “I’ve got a chip in my hand to pay for my booze and a chip in my jaw that regulates my collagen flow. If someone hacked me, the worst that could happen would be that I’d be bone broke with incredible lips.”
--Jon Richter, Auxiliary: London 2039

‍Moss turned on his dronepack and began hovering off the roof. No automated coordinates now - he controlled the movement with his neural implant. Patchwork had unlocked further functionality when he hacked the implant to ensure ThutoCo couldn't get to him.
--Matthew A. Goodwin, Corroded Cells
‍
Recording, no poison indication, not even a red flag or suspicion she’d been hacked—nothing was missing, no thoughts were awry. She’d passed out for almost a day and all her systems showed was high levels of stress—
--Andy Futuro, No Dogs in Philly

He had not understood what Ynna had meant when she said, “wake you up,” but it was now clear. She had hacked his implant, so he could now hear other’s neural commands…He didn’t like hearing others’ commands, communicating without speaking or the idea that his very mind could be hacked.
‍--Matthew A. Goodwin, Into Neon: A Cyberpunk Saga
‍
General:
“The Syndicate has been in a hacking war with the Aryan Brotherhood for several months now. The two organizations have been going back and forth, hacking or attempting to hack each other. They have reached a stalemate, and the target and his team may be just enough to tip the scales in the Syndicate's favor. The analysis indicates that an attack on the Brotherhood’s crypto wallet or their VR sex business is most likely.”
--Marlin Seigman, Code Flicker

If you…keep delving…you're going to find base code that was written by some Linux geek in the 1980s or something. File system primitives. Memory allocation routines that were made to run on hacked single-core IBM PCs that had never heard of the Internet.”
--Neal Stephenson, Fall or, Dodge in Hell

Niccolo pulled up his scanner and aimed it at the cannon’s UIP. If he was lucky, the Merc had hacked the cannon and installed a feedback loop onto himself, allowing him to receive the status updates as well. Which, he had. Niccolo smiled, he loved this shit.
--Nicholas Catron, Redemption & Revenge

Widan Ludgate had had…a decent run as a cyberspace cowboy. (He) had stormed off on an extended pass through the rather sparsely occupied sectors of the matrix…Silicon doesn’t wear out; microchips were effectively immortal…All that obsolete silicon had to be going somewhere… (into) nascent industrial bases.
--William Gibson, Count Zero