Trouble and Her Friends - Review

"Power lies before her, planes and fields and streams of light, the familiar night-city that lies always in her core…
They walk the nets like the echoes of a dream."
‍
-Melissa Scott 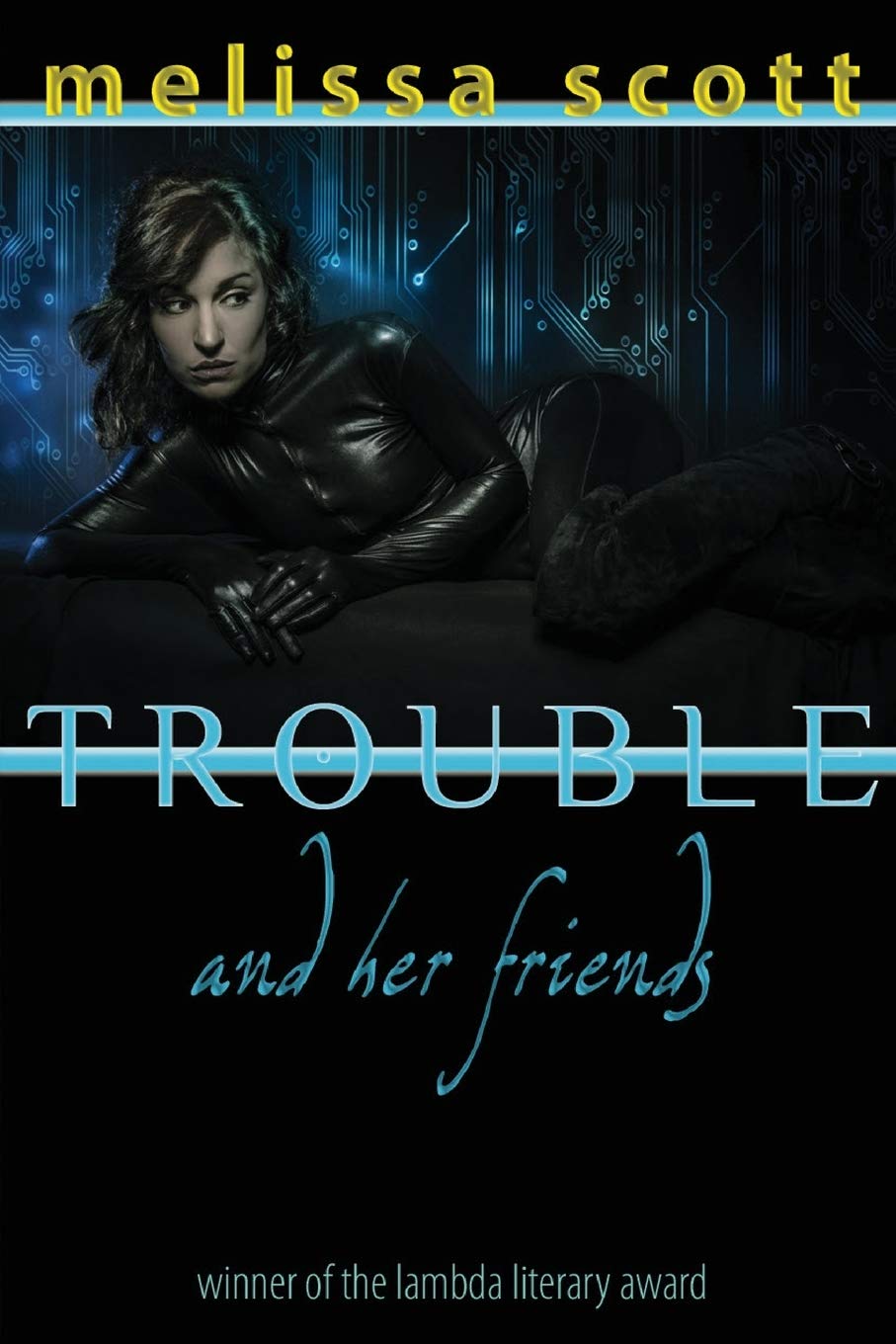 Trouble and Her Friends is an award-winning cyberpunk novel from 1994 written by feminist author Melissa Scott who has made major contributions to the sub-genre. India Carless (whose tag is Trouble) is a netrunner whose name is being tarnished, as someone has stolen her tag and is using it for criminal purposes. In this cyberpunk mystery she’s assisted by Cerise, her former lover, and numerous hackers as they negotiate their way through the underground, and cyberspace. The LGBT themes are a natural part of Trouble’s world rather than an arbitrary add-on; they don’t seem forced just to earn points with certain audiences, they're genuine,

...she’s always been on the outside, not quite of the community that polices the net, set apart by the brainworm, gender, and her choice of lovers.

Let me state upfront this is one of the top three cyberpunk books I’ve read (out of over fifty). While the story isn’t as complex as Neuromancer or Snow Crash, the writing brings forth a poetic description of cyberspace without comparison, and should be required reading for any cyberpunk author or aficionado. Unlike many classic cyberpunk authors, Melissa Scott doesn't shun the sub-genre, she still feels an affiliation with it to this day, as stated during a convention I attended for her next novel, Gen:Lock, on 9/18/20.

The book begins from Cerise's perspective with solid exposition. Trouble has gone missing, allegedly due to an act being passed that made cyberspace a particular legal jurisdiction, (establishing)...a law governing these electronic transactions. In other words, dangerous for a data-cracker like her. The law made data theft a tangible theft that could be punished (remember this was written before Napster brought light to this issue). However, a side character, Helling, says that hacking won't be completely wiped out because the corporations use it to their advantage.

And there were plenty of corporate spaces, privately owned systems that nonetheless also existed in the unreal “space” of the myriad networked computers that was the nets; all of those preferred to be invisible, at least to an outside eye.

All the cyberpunk elements are present, from the constant advertising,

She glimpses a familiar shape, a hint of flowing robes that move against the current of the datastream that enfolds them, and tries to follow. But the crowding icons—balled advertising, jostling users, once a virtual pickpocket, groping for useful programs in other people’s toolkits—block her way…She drifts past, not bothering to make any reply, her own icon dimmed and ghostly in the midst of all that brilliance…

‍To hacking through ICE, a concept that Dr. Tom Maddox originally gave William Gibson right before 1984,
‍
IC(E). She could almost see it, taste it in memory, a massive cylinder of glass, light spiraling slowly up its side, to drift down again in a faint haze, hiding the codes that make up the real security. She had never seen IC(E) that tight before, could hardly wait to try to crack it…The IC(E) glitters behind her, lights trembling as though something behind it laughed, and she thinks she hears the whisper of a giggle.

To drifting through cyberspace,

‍Overhead, a light gleams like a moon, full and brilliant: an open conference, and she hesitates, tempted, but makes herself turn away. The lines of the nets expand before her, roads and rivers of data like glowing highways; she chooses one, not quite at random, and lets it carry her down toward the BBS. The rivers move more slowly here, where talk is free and the lines are overburdened. She disciplines herself to that meandering pace, drifts silently from node to node.

Once you plugged yourself into the system—either via the implanted dollie-box and dollie-slot, the direct-on-line-image processor system, which gave a text-speech-and-symbol interface, or through the full-sense brainworm, with its molecular wires running directly into the brain that let you experience virtuality as though it were real—it was easy enough to find your way around the nets. There were signposts, vivid neon images, and the swirling rivers and lines of light that were the virtual reflection of the data itself…
‍ 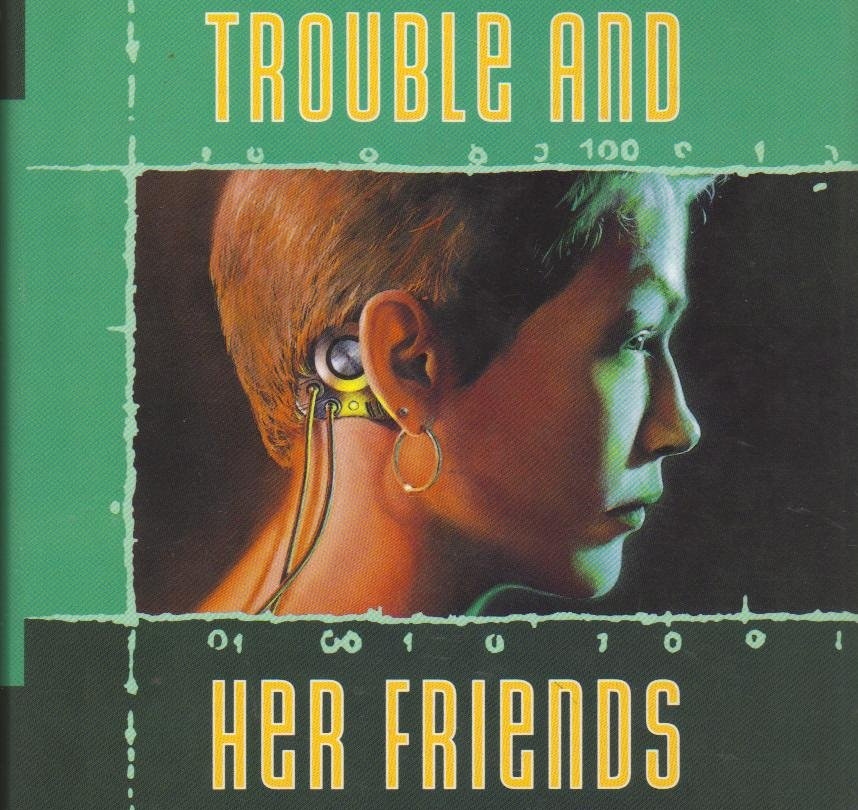 Anyone familiar with my own short stories can see where I draw my inspiration from in her writing,
The data flows and writhes like grass in the virtual wind, and she glides along the shifts and shadows, a shadow herself against their virtual sun. At the starpoint node, she slides from that high plane into a datastream like a canyon...She leaves the way she came, sliding oblique along a trail of untouched data, slick beneath her feet like a film of ice, and glances back to see the net healing itself behind her, closing to leave no trace she’s ever been there. This night’s city flows beneath her, datastreams like rivers of cars, and she walks the nets down again, merging with the data until it pools and slows and feeds out into the great delta of the BBS.

So Trouble establishes a new identity, goes legit, and then gets dragged back into her previous life in a typical cyberpunk fashion. I would argue that at times cyberspace seems more alive and vivid than her characters, but there's enough characterization to get the job done. Trouble is not an overly emotional dramatic character; she maintains control even under pressure for the most part. Not going to even discuss the plot further though – it’s good, but it's a necessary evil just to return to the glorified descriptions of cyberspace. You read one plot you’ve read them all – but the journey here is incomparable.

The book's tactile; you can feel it. Pure poetry, and five stars – one of the best the genre offers. Go purchase it on Amazon and see for yourself.

In the below video I give a reading from the book. Check this article for my first impressions of the cyber/solarpunk novel she wrote next, Night Sky Mine.

Finally, I asked Melissa if her new novel Gen:Lock, based on the anime, would continue with her characteristic descriptions of cyberspace (or in this case the ether). She responded, “The Ether is pretty well established in the show, and of course I worked within those parameters. I think the Ether is closer toTrouble’s vision of cyberspace than Night Sky Mine’s, but there wasn’t room for the extra stylistic flourishes of those books.”
Nevertheless, I'll be looking forward to seeing her latest work when it releases in about a month!
‍