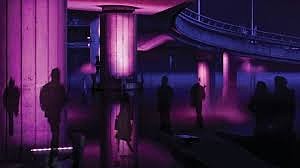 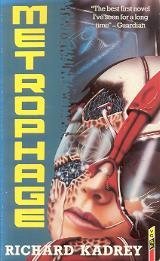 Metrophage is a cult classic cyberpunk novel by Richard Kadrey that was published in 1988, barely a year after Michael Swanwick declared that Cyberpunk is Dead. The book takes place in the near future in a dystopian Los Angeles inhabited by myriad factions, each defined by their cybernetic implants and alterations. From the Piranhas with their sharpened teeth, which represent Baby Boomers, to the revolutionary but stoned-out Croakers, each group is as distinctive as their leaders. Throughout the book, the factions fight for control, and the drugged-up teenage police force, the Committee, is more a part of the problem than the solution.

Kadrey credits J.G. Ballard and Gabriel Garcia Marquez as inspirations in general, and William Gibson, William Burroughs, and Robert Stone as heavy inspirations for Metrophage. He’s also quite familiar with the work of sociologist Paul Virilio. Spoilers ahead.

The book maintains Jonny’s perspective throughout, a pedantic drug dealer who’s just trying to get by but keeps getting involved in others’ affairs through being kidnapped, injured, and triple crossed. Jonny works for a variety of mob bosses who are trying to use the pandemic to turn a profit by monopolizing a cure while deciding whether Jonny’s worth more dead than alive. The lack of a telecommunications network causes Jonny to take on most of the conflict face to face, resulting in myriad shootouts as he runs through game parlors, bars, and sewers.

The sewers, laced within the body of the city, were the corroded veins of a sick addict, shut down from age and abuse.

‍The plot also revolves around threats of World War III on the horizon.
Every page reads like today’s news headlines.

“The powers that be required enemies as much as they needed friends, and they could not live without scapegoats to keep their propaganda machines working.”
‍

Character:
‍
Despite the book’s tense action, Jonny’s fairly passive as he's manipulated. His antihero character stays fairly constant over time without much evolution. Even when Jonny becomes temporarily blind, a section that could have been extended for better self-reflection, his character remains relatively unchanged. This changes only slightly when he's confronted with philosophical advice that the world’s an illusion anyway, and that we don’t ever truly see it.

Thus, there isn’t a proper character arc from a literary perspective, but I don’t expect cyberpunk antiheroes to change or to follow a proper arc, as that’s just not the way antiheroes work. The antihero is as such because he or she refuses to be emotionally moved in any way by what’s happening, existing in survival mode after a lifetime of trauma. Nevertheless, Jonny’s transformation at the end of the novel after losing everything, transforming into a man who gives up money and drugs to pursue a spiritual life, seems forced and is unconvincing despite some foreshadowing. His actions never speak beyond himself and his lovers, caring little for the pandemic’s impact on anyone than Sumi.

His main accomplices are his lovers, Ice and Sumi. In their three-way relationship, Jonny is the persecutor, blaming Ice for leaving Sumi and him to pursue a revolution that he feels is pointless, partly because a lot of revolutionaries were just hopping on a bandwagon without a true investment in the cause. Sumi is the rescuer trying to keep the peace, and Ice is the victim who, refusing to be victimized by those around her anymore, seeks to destroy the system.

"It’s funny you should raise the question of political philosophies...."
"That’s because they don’t exist,” Jonny said… “Look pal, I’m just here to pick up some dope."

The pixels had the effect of distancing Jonny from what he saw. He felt that he was watching the room from a video monitor, shooting through thousands of individual squares of beveled glass.

‍
The action reads great, and keeps the book going in every chapter. The poetic appeal makes for vivid imagery.
‍
The Committee hovercar roared by suddenly, like an angry metal wasp – all sleek and deadly, its belly lights casting angry fingers of brilliance over the empty buildings.
‍
A sleeve grazed his face, electric jolts sending Jonny down to his knees. Man Ray danced past him, his medusa out and swinging over his head. Charged lashes flowered sparks as they touched, giding the air above the Guru’s head with spinning galaxies, ghostly landscapes of exploding stars, playing cards, cometary butterflies.

NPR stated in their 2014 review, “(It was) Like Kadrey wrote it in constant fear that no one would ever allow him to publish another word; like he had to jam in every idea he’d ever had (or borrowed) with no room for breath between them.” I can sympathize with this, because I did the same thing in my first novel, but I disagree with NPR’s analysis as applied to Kadrey. Cyberpunk is supposed to be overwhelming and disorienting; it’s two of the sub-genre’s core traits. Metrophage is far more coherent than much of the genre’s offerings at that time.
‍
The book is thick with atmosphere and reads much more modern than something written in the late 80’s, though holograms do take the place of what would be augmented reality today. The characters and story are simple. The writing is generally high quality and atmospheric and exemplifies cyberpunk. Simultaneously, it’s less creative in plot. The existence of aliens seems tacked on to the book rather than integrated into its world, though 80’s cyberpunk was often set in or discussed space, such as Maddox's Halo.

‍Metrophage is a simple story with no real subplot, but what it does – creating a futuristic dystopia at a breakneck pace, it does well. The title says it all, city life becoming an infection that sweeps through the masses, and if there's a cure for it, it's books like this that bring awareness to our dystopia.
‍
References:
NPR. (2014). Back to the Future - The Grim, Grimy, Chrome-Coated Future. Available here.