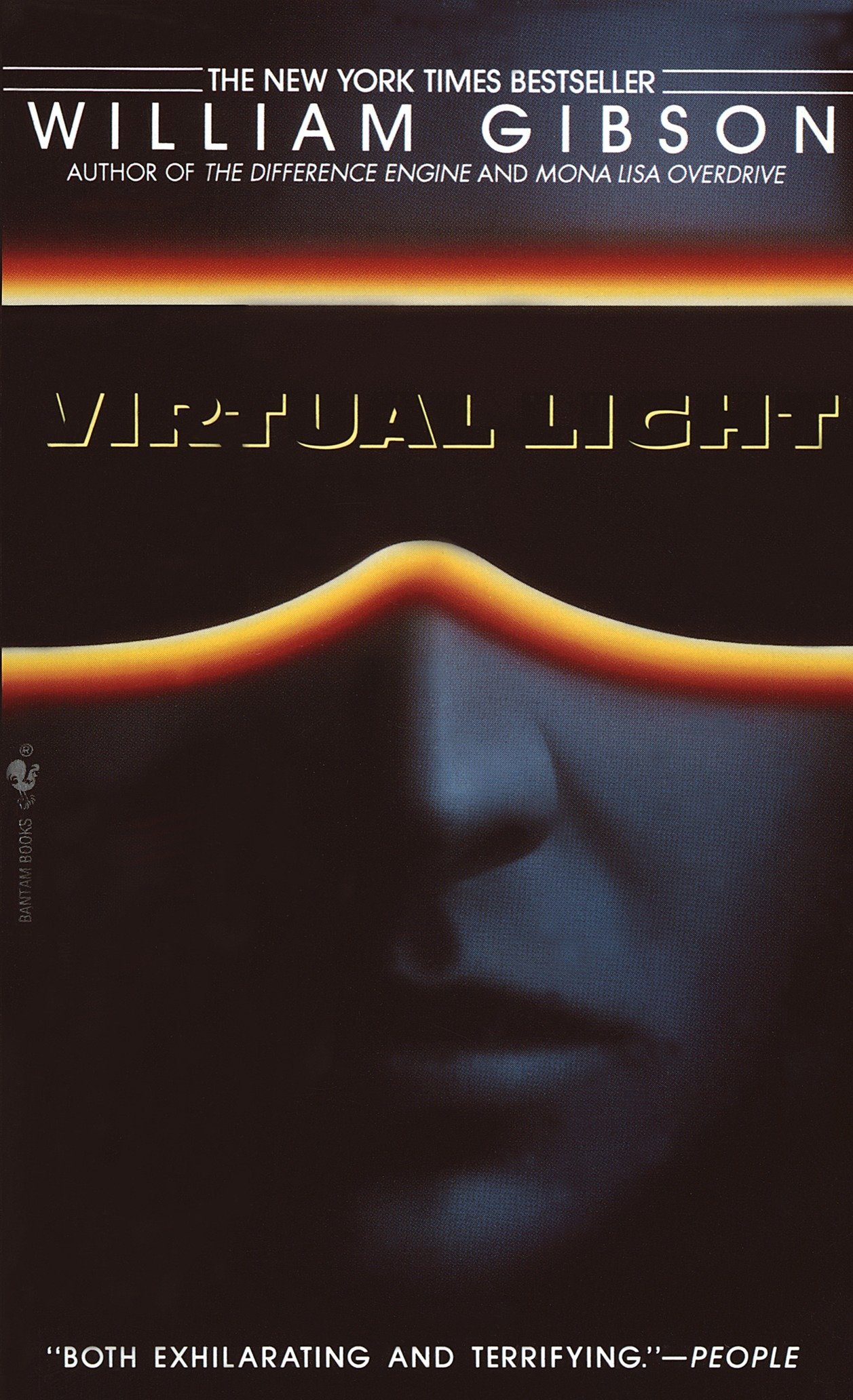 Intro:
‍Virtual Light is a cyberpunk book written by William Gibson and published in 1993, releasing to immense critical acclaim. It’s the first cyberpunk novel in Gibson’s Bridge Trilogy, which also contains Idoru and, my favorite of the series, All Tomorrow’s Parties. Gibson credits writers such as Samuel Delany, John Shirley, Bruce Sterling, and Dr. Tom Maddox as providing him artistic support and the right phrases for this important work.

The novel follows a young courier at the edge of homelessness, Chevette Washington, who steals a pair of augmented reality glasses containing a secret city blueprint. A secondary protagonist, Berry Rydell, is then contracted as a rent-a-cop to get them back, until their paths cross and they find themselves involved in a major conspiracy far over their heads. The plot is basic, but the writing and use of extended metaphor is phenomenal.

This was a figure, too, and just as big, but all made up of television, these moving images winding and writhing together…something that might either have been a man or a woman…it was like trying to watch a million channels at once…a sort of hiss that somehow wasn’t a sound at all.

Welcome to the Republic, said the Dinosaur, its voice the voice of some beautiful woman.‍

The Bridge - Dividing Class and Modernity:
‍‍
The bridge is a structure in San Francisco meant to link cities together, but after structural issues from an earthquake, it ended up being a skeletal framework with limited usage, as it was never rebuilt. The homeless occupied the bridge, setting up an arcade of makeshift homes, shops, minibars and scaffolding, and using a crane bucket as an elevator to traverse the levels. What crashed was not the bridge, however, but modernity itself:

He stood still, one hand on a wooden railing daubed with hyphens of aerosol silver. Skinner’s story seemed to radiate out, through the thousand things, the unwashed smiles and the smoke of cooking, like concentric rings of sound from some secret bell, pitched too low for the foreign, wishful ear. We come not only past the century’s closing, he thought, the millennium’s turning, but to the end of something else. Era? Paradigm? Everywhere the signs of closure.

Modernity was ending. Here on the bridge, it long since had.

This is why the bridge goes nowhere, just truncates at a hard stop. Not only is that the outlook of the homeless, robbed of the ability to have rich aspirations, it’s also the fact that postmodernism leads nowhere, a common criticism. Put more optimistically, postmodernism is the end of determined history, as the book alludes to in a Hegelian way as humans free themselves from the constraints of the material world. This is freedom is what cyberspace and augmented reality bring, but it's only accessible to the rich.

When Chevette obtains the augmented reality glasses, which she steals from a rich entrepreneur on a whim, she doesn’t even know she’s carrying a piece of tech that’s worth the price of a car. The bridge where she lives, then, also shows the technological divide between the rich and the poor, as even with great wealth in their hands they lack the education to use it. That wealth is described in terms of information. The lesson? If the world suddenly gets access to the internet, without education it will only increase the class divide.

Funny thing is, the internet went public the same year Virtual Light was released, and even today in Florida, 11% of residents don’t have access to it (over two million people in this state alone, which suffers from horrible inequality).

"There's only two kinds of people. People can afford (rich) hotels like that, they're one kind. We're the other. Used to be like a middle class, people in between. But not anymore."
‍ 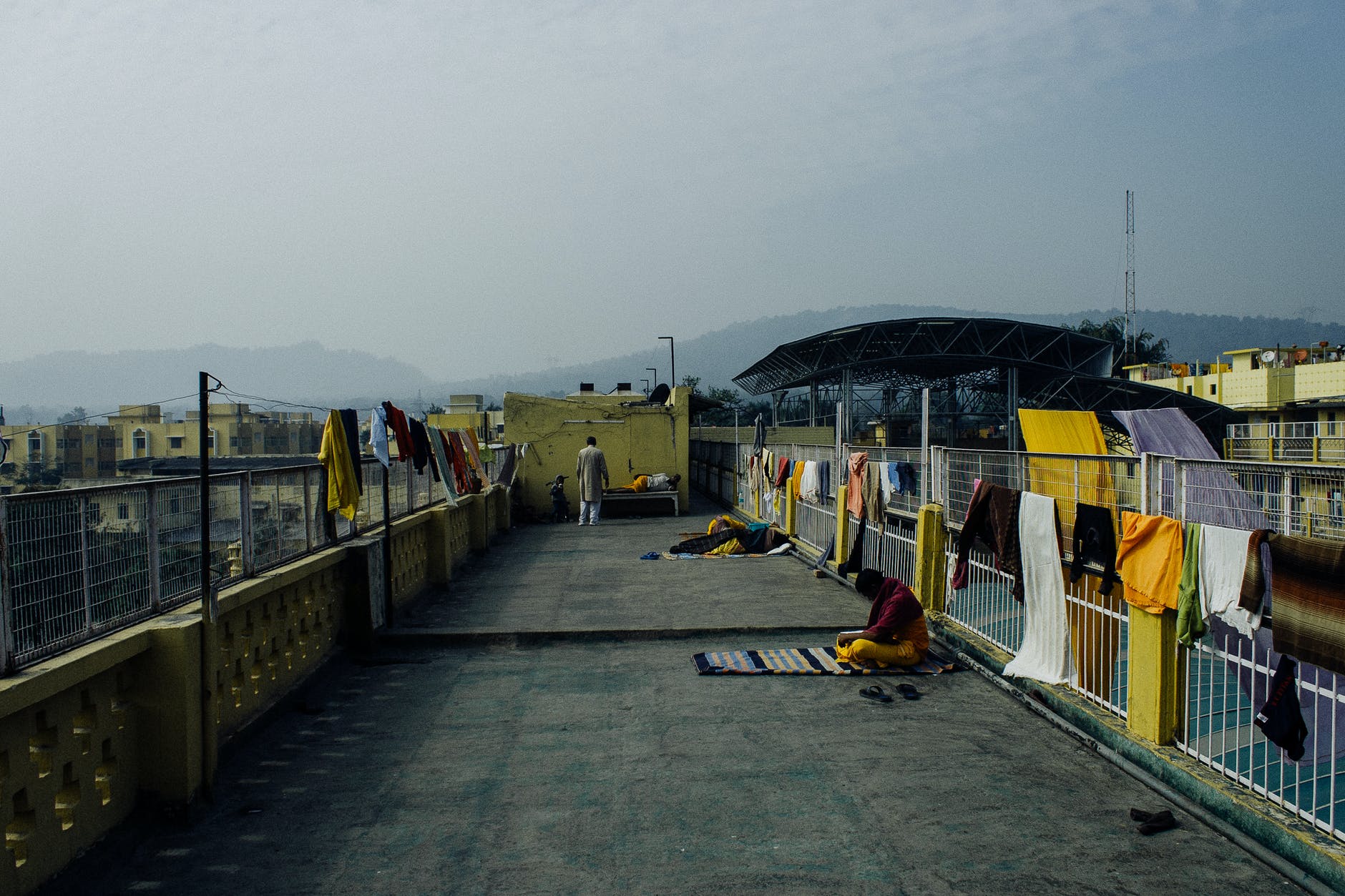 Gibson emphasizes globalization in his description of fashion items. Everything is commodified: He said he couldn’t tell the difference anymore between the programs and the commercials, whatever that meant.

Everything is hyperreal to the point where it doesn’t exist:
The (store)…said THE GAP….
“Why’d anybody every call a store that?" Rydell said.… “All those places look like gaps now.”

This hyperreality is represented by plastic trees grown by nanomachines, remastered movies, remastered history, and Thomasson, a powerful, attractive baseball player who got a ton of money from contracts despite not being able to play the game. The word Thomasson becomes extrapolated as such: The whole city was a Thomasson. Perhaps American itself was a Thomasson…

‍Yamazaki, a side character, is obsessed with the word, and figuring out the nature of the bridge. He discovers the bridge has no underlying structure, only the bones, the Thomasson itself. He’s also terrified of Godzilla, unable to tell that it was only a fictional tale as narratives and reality collide. The bridge is likewise something he’s terrified of, an unthinkable creation, this modern world lost in all its frivolous narratives.
‍
“Fallonites believe God’s sort of just on television, I mean.”
“God’s on television?”
“Yeah. Kind of like in the background or something…”

From “pocket phones” to augmented reality, Gibson represented what was then the near future. Perhaps most coincidental are the scenes discussing everyone being in masks due to a deadly pandemic, and how the Republicans were trying to prevent people from being vaccinated in favor of faith healing.

The hyperreality is reified at the end when the whole story gets reenacted as an episode of the hit television series Cops in Trouble, which also brings Rydell’s life together in a loop, since it was the show that first inspired him to become a cop.

Action ensues, but it's all secondary to the setting, which takes precedence as being more powerful than any character.

Overall:
‍
Wonderful prose wrapped around a basic fetch quest plot. The description of the bridge and use of extended metaphor sell this as a cyberpunk classic.