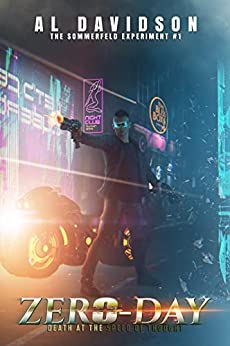 
Zer0-Day: The Sommerfeld Experiment #1 is the first cyberpunk book in a new series by Al Davidson. It follows Joshua, whose group is marketing tech toys for terrorists. Their secret weapon is Maelstrom, a covert drone that releases a battery of nanomachines to tear victims apart from the inside out. The machines disguise themselves as helpful med-bots as they digest their targets, delaying investigations. Joshua has the unique ability to control them, making him high demand and putting him at risk. When he performs a strike against a church to demonstrate Maelstrom’s power, he gets pulled into a world of power struggles that tests his resolve. Minor spoilers ahead.

Like millions of microscopic bees, the third nanomachine swarm rushed along the data stream…the scene began to pixelate as the nanomachines ate…tiny flashes of silver so small only Joshua perceived their existence. Harmless on their own, lethal with focused intent, waiting for instructions… A barrage of information streamed into Joshua’s mind to be analyzed.‍‍

Story:
‍
The book takes place in a dystopia where many things are constantly floating, from holographic displays that light every street, to drones, platforms, and skylabs. Most people spend a ton of time in VR, going so far as to have two weddings, one in the Real and one in the virtual. People may even marry two different people in each world as they compartmentalize these realities. For Joshua, the virtual comes to life as his conspiracy theories about the groups behind an online game materialize in meatspace.

Zer0-Day takes other characters’ viewpoints as well, such as Joshua’s friend and associate Kevin, who is working for funds to support a wedding to his long-time sweetheart. Farrell with the NSMZ security force, Meriweather, and others round out the cast as the story takes alternating perspectives between Joshua’s actions and the investigators trying to figure out what the hell's going on.

Things become complicated when a woman named Sophia enters the scene, sparking up a quick romance with Joshua before their relationship takes a sudden turn. Shifting loyalties keep the plot interesting as everyone takes power grabs.


Joshua is a cynical, cyberpunk anti-hero with plenty of augmentations like retractable forearm blades that would be at home in a game of Shadowrun (interestingly, Al advised me that he used to play the game, which inspired the protagonist). Joshua's more concerned with getting by than his fellow man. For instance, he describes the homeless as “street scabs.” There is an emotional moment, however, when he believes he may have killed Kevin where the reader will note the sensitivity beneath the hard exterior. One can also see this when he reminiscences about his late mother.

Online he goes by the tag Zer0-Day. A zero-day is a flaw, an unknown exploit that exposes a vulnerability in software or hardware and can create complicated problems…. These loopholes and bugs can be taken advantage of by hackers and must be fixed immediately, hence the urgency in the phrase.
‍
Writing:
‍
The writing is vivid and fast paced, quickly throwing the reader into the fray. The unusual passive voice in the introduction soon departs (I enjoyed the effect though). Scenes are set with just the right amount of imagery to make them work without boring the reader with useless details, such that one can picture the battlegrounds whether they’re an open area or an hacienda. Metaphor is used sparsely, but is effective when it is employed:

Joshua glanced from the pneumojector up to Sid’s eager face. He locked eyes with his best friend as he pressed the plunger into a fat vein on his arm…The drug blew into his system like a surge of molten lava. It burned along his nerve endings, grabbing the skin of his scalp and squeezed…the thrash metal playing in the background became waves of color spiking, entwining and spiraling in mini tornadoes.

The fading sun hovered low in the sky, its heat like a dying blast furnace baking everything in its radius..

Zer0-Day is an action-packed cyberpunk thriller that doesn’t let up, taking the reader on a joyride. In this regard it was similar in structure to Entropy Angels. I did find myself wishing for more slices of life sections and slower pacing between action scenes, which could be more opportunities to create depth, as Joshua is thrown into near nonstop action sequences. The investigative scenes between chapters provide some reprieve, but as investigators seek to uncover what happened in the prior chapter’s action sequences, these scenes weren’t as exciting since the reader already knew the full details of what occurred. Nevertheless, it’s a common novel structure. By hiding some details in an action scene from the reader, it might allow more suspense during investigation.

From the descriptions of female characters, to the level of violence, the book’s strong male point of view may make it more enjoyable to a male audience, or a female audience with a traditional male perspective. The word gun and its lethal variations is used 77 times, almost twice as much as the average cyberpunk novel, however, the book is also longer than average, prompting higher numbers. The word knife occurs 22 times, also higher than average, though in line with the length.

There’s a lot to like about Zer0-Day and its heavy use of military technology, and the writing’s solid. I look forward to his future writings, including the sequel, Gauntlet!