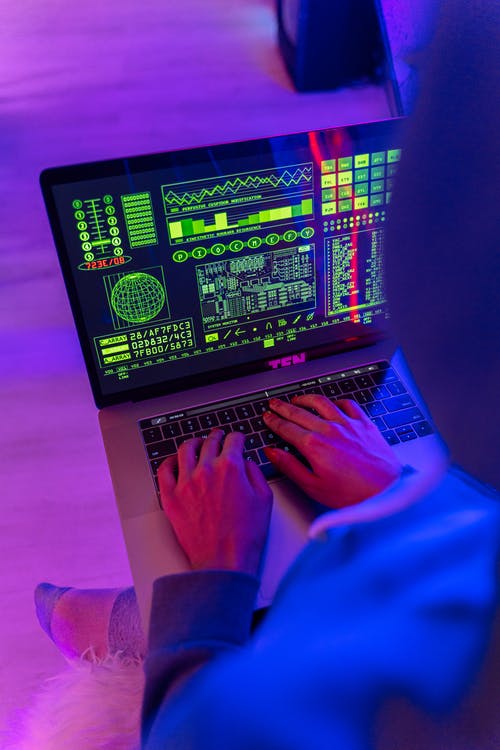 ‍Violence in media has been a hot topic for over thirty years, but studies have been inconsistent on the impact these images and narratives have on human behavior. Some studies claim there’s minimal impact, or they only impact those who are already mentally unstable. Other studies claim that movies like The Matrix played a large role in the increase of school shootings, including the Columbine School Massacre, which occurred less than a month after the movie was released in 1999. But most of these studies have focused on violent movies and games and not literature, leaving a gap in our understanding. This article is not a nature versus nurture debate, and assumes a constructivist perspective.

Cyberpunk literature is particularly violent, and this violence has typically been seated within the nihilistic mindset of the archetypical anti-hero. The violence associated with becoming a one-man powerhouse is romanticized with distinctive fashion, sexualized female characters, and slick cybernetic augmentations. This violence sometimes occurs in virtual reality, but it's registered the same in the brain, just as the brain responds to Mario smashing a goomba in Super Mario Brothers the same way it does to shooting someone in Call of Duty. Violence is violence.

This study focuses on physical violence only (as opposed to coercion, threats, manipulation, and such, which is referred to as relational aggression). Physical violence is defined as someone hurting or trying to hurt another person with physical force. Let’s examine the use of violent terminology in cyberpunk literature to gauge its violence level.‍

Reading violent literature has been linked to aggressive behavior, fear, desensitization to violence, and a negative world mindset, but the results of these studies are not always replicatable, nor inherently applicable to the real world. Public opinion, however, is that yes, they're connected. When people were asked if violent books increase aggressive behavior in a study (Frank, 2020), respondents believed it definitely had an impact on other people, but believed it impacted others twice as much as it impacted themselves. This represents a well-documented observer bias.

Many studies on violent literature include pictures, biasing the research, but this was not the case with a study by Bushman, et al. (2007). The study not only showed a connection between reading violent literature and aggressive behavior, it also showed that this impact was significantly increased when the violent scene was from a spiritual text, compared to a secular novel. This means texts that justify violence have a greater impact on aggressive behavior than those that do not. Note that cyberpunk settings are dystopian with oppressive governments and corporations running things at the people's expense, thus its violence is often viewed as justified by the reader, in addition to reader's tendency to identify and root for the protagonist in general. Later, those researchers determined that the average adolescent is exposed to 30 acts of aggression in the average popular novel per hour reading it, or about 100 aggressive acts per novel.
‍
By Contrast, Mckay (2012) found no relationship between reading violent literature passages and aggressive cognition, though there were some unclear secondary findings. This contradicted a study the previous year at the same university that showed it did, but it required provocation for the impact to present itself (Coyne, 2011).
‍
Being exposed to violence does not always have a negative effect. One study found that brothers playing cooperative violent video games together had a stronger bond with one another thereafter. Reading dystopian literature like cyberpunk has been linked to a ten percent increase in government scrutiny by the reader, which in some civilizations may be a good thing. Reading any type of non-erotic literature can make people feel calmer.

Methodology:
‍
I examined 26 cyberpunk novels, both indie and traditionally published, based on a convenience sample of books written over the past fifty years. I examined the novels for word-frequency counts based on the word gun and its variations, including: gun, guns, gunman, gunmen, gunwoman, gunwomen, gunpowder, gunfight, gunfire, gunner, outgunned, gunpoint, gunsight, shotgun, gunslinger, gunfighter, gunshot, etc. If a book used an alternate term for gun such as pulser, it was used for the count instead. Words like begun were omitted. I did the same thing for knife, including dagger and knifed. I then counted the word use of blood, including bloody, bloodied, bleed and bleeding, in addition to bloodthirsty. Bled was not included.

The average cyberpunk novel used the word gun and its variations 44 times (mean=43.57, median = 41.5). The average bestselling novel is around 275 pages, so I estimate the word is used once every six pages. Granted, action scenes normally occur in bursts throughout the book, alternating with reflection scenes, so it may appear ten times in a single scene and then not occur for three chapters. The standard deviation was 15, thus, if someone is using the word less than 28 times during their novel, they are notably below average. Likewise, if someone is using the word more than 72 times, they are notably above average.

The words blood or bleed occurred 45 times in the average cyberpunk book (mean=45.34, median=34). This also occurs at a rate of once every six pages.

In all cases, the median was less than the mean, showing the influence of outliers. Some books had 130 references while others had 0. As expected, books like Dr. Adder by K.W. Jeter had more gun references (56) and blood references (90), than books like feminist author Melissa Scott’s masterpiece, Trouble and Her Friends (gun references =24, blood = 7). Note that these are not counts of violent acts, but simply associated word usage.
‍ 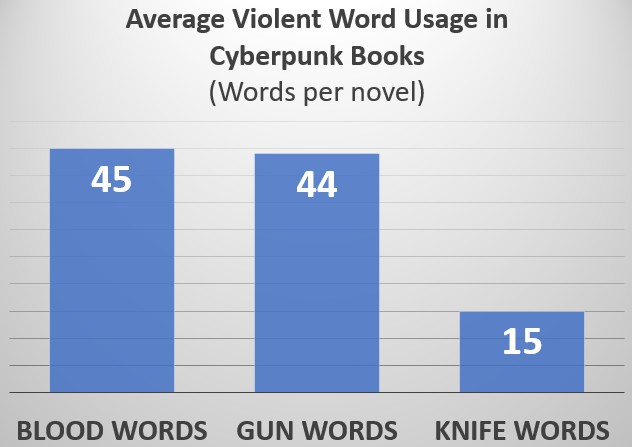 The preliminary results suggest a need for cyberpunk authors to go beyond solving everything through violence. Not only are violent scenes predictable, negotiation and other forms of conflict resolution create more complex characters and plots. The lack of subtly in violent scenes can hinder suspense, instead of heightening it. The gun that you see at the beginning of a book that’s carried in each scene, cleaned, loaded, contemplated over, and held but not fired, can be more impactful at creating suspense than a thousand bullets. Of course, Chekhov’s principle means that eventually that gun must be fired. But once every six pages? Have we gone too far with our action scenes?

Granted, not every usage of the word gun would be violent, just as knife could refer to spreading butter on toast. If two characters have a discussion about gun control, it would register as a hit. Nevertheless, the majority of the references were violent or peripheral to violence. A few uses of blood were not removed from the dataset by researcher error, such as bloodline and bloodstream. The counts do not include pronoun usage (referring to a gun, and then in the next sentence using the word “it,” which some authors use more than others). Other forms of physical violence and weapons were not included for brevity.  The authors were predominately male in this non-probability based convenience sample, with a few authors having more than one book represented. The length of the book was not controlled for. The motive behind the violence (self-protection versus aggression) was not considered. Thus, this should be considered a preliminary study that I hope will prompt greater interest and self-reflection.

The referenced studies also have their own limitations. Many studies that examine the impact of violence in the media on thoughts and aggression only examine it for a brief period of time proceeding the reading, and the long-term effects are more obtuse. There have also been issues with ecological validity (that is, do the research laboratory conditions match the real world enough to generate valid conclusions).

If constructivist approaches to social science are correct, then cyberpunk authors should consider the frequency of their violent scenes. Otherwise, our narratives may end up creating the dystopia we’re trying to prevent. In response to this, my next two novels will be substantially less violent, but also my strongest. 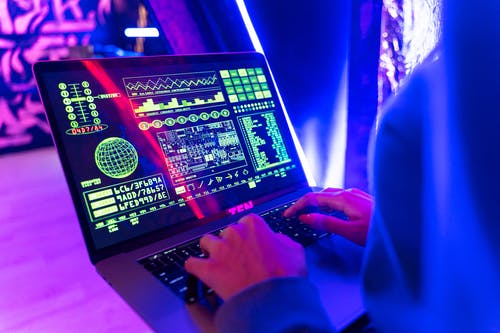 Related Articles on this Site:
‍
Cyberpunk's View on Cybernetic Augmentations
‍
Cyberpunk: Gender and Class through a Post-Modern Lens