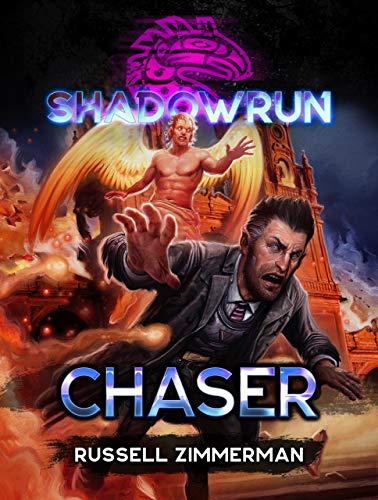 
There’s two types of cyberpunk fiction. The first is heavy on philosophical themes like how do we establish our identity in a fabricated world, how will technology change our societal relations, and how can we resist turning into products as our personal data is sold out, along with the whole human race, to appease well-fed stockholders. The second kind is the type where a bunch of kick ass cybernetically-enhanced vagabonds in slick suits say fuck philosophy and shoot up a data center in a brilliant explosion of sparks. Seldom do cyberpunk books end up half way between these extremes.

Shadowrun often leans towards the latter. The more than 30-year old franchise has inspired over 50 novels in English alone, in addition to tabletop, card, and video games (my favorite being Shadowrun: Hong Kong).

‍Shadowrun: Chaser is a cyberpunk novella from 2020 that shows Russell Zimmerman’s ability to combine fantastical elements with a classic noir, cyberpunk tone. It’s a world where everyone has SIN (system identification numbers issued at birth) and where remnants of modern society like soykaf, a coffee substitute, exist beside the latest tech.‍‍

‍
The story follows detective Jimmy Kincaid, who is trying to solve a series of murders as he investigates scenes, argues for jurisdiction, and encounters suspects.

...local hate groups likely to target changelings and metahumans, or pure slasher-joy wiz-gangs, sociopathic knots of street-wizards who were just out for the fun of the kill.

The fantasy really sets the series apart as something unique. Even in the short space available, Zimmerman explains how the magic works for those unfamiliar with the series. The most intriguing fantastical element are the ally spirits -- codependent incarnates summoned by the gifted. What makes them cool is how they reflect the summoners’ personalities, taking on their best and worse characteristics from love and protection to rage and destruction. Kincaid's ally is so powerful that it does diminish the suspense of some scenes, however.

She was a being born of magic and will, a creature of mercury and fire and will-made-flesh, able to interact with the astral…

Unfortunately, these allied spirits can be summoned for ill intent as well.

A winged angel made all of fire – no shit – twirled and fought with her, a dogfight you’d have to see to believe. The angel seared everything that got too close, including my gaze, it was a swirling mass of rage and plasma, roiling red and white hatred given form and energy. It hurt to look straight at it, like a solar eclipse or the bottom of a glass.

The last line there gives us a glimpse of Kincaid’s character, as he’s a recovering alcoholic like any good noir detective.

There’s a hilarious section at the end where Kincaid lights his cig inside the magic circle containing the fire angel, offering one to the preacher. Cyberpunk has never taken itself too seriously, and scenes like that combine noir with an uplifting, almost satirical bite.
‍ 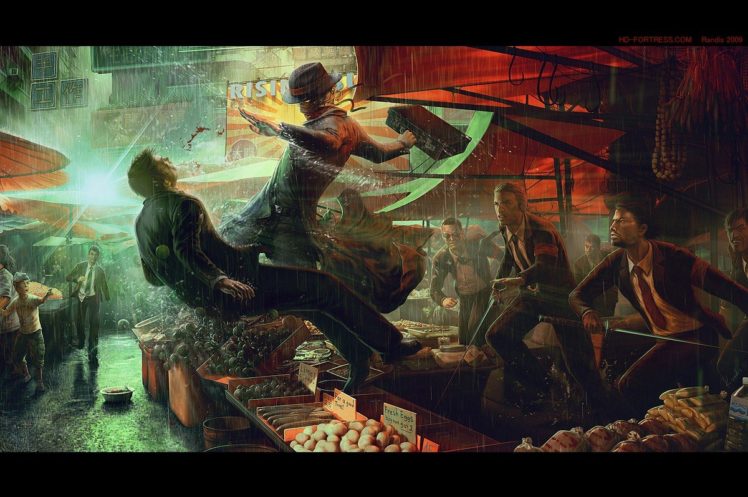 Shadowrun: Chaser doesn't cut new ground. There are no deep themes, and the first two thirds is standard cyberpunk. Still, the epic ending is quite entertaining, and despite the lack of character development, those who are looking for a casual, quick read will find a nice pastime, as its straightforward and unpretentious. I do wish the ending sequence was longer and that Kincaid had to overcome more during the climax, perhaps facing his own conflicts about spirituality more.

There was also a lost opportunity to discuss religion and hypocrisy and what draws people to stay in the priesthood even after losing their drive to do so, though Zimmerman has already been criticized for the book's religious tones as it is. Critics must understand that a character's perspective is not the author's perspective. Chaser plays it safe for a counter-culture genre intent on undermining our basic assumptions about reality in a blast of near nihilistic glory. Cyberpunk tears down in order to create something new from the depths of our repressed better nature, and I will always support authors like Zimmerman who aren't afraid to set an angel on fire to do so.