"I write life...The theme of my writing...let it be hope."
‍
-Mark Anthony Tierno 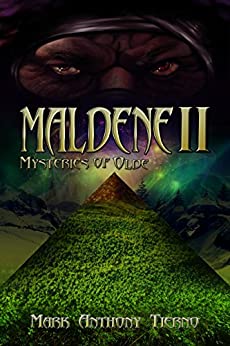 Mark Anthony Tierno is a physicist who has written over nine million words through multiple books, but he waits until every word is perfect to slowly release them to the public. Earlier this year, we covered his first book in the series, Maldene, which makes a run at authors like R.A. Salvatore for the fantasy throne. As interested in cyberpunk and general science fiction as he is in fantasy, he can write in a variety of styles which attracts audiences from multiple genres, while driving literature to evolve.

Maldene II opens with a rhythmic feel to the prose like marching into battle. These rhythmic chapter preludes and interludes provide a poetic mystique. We soon switch from an assassin in the opening scene to the elf, Eldar. Other members of the previous book’s cast soon return, from the humans Sabu and Bronto to Blag-ak the orc, to Mauklo (who’s playing his own game), and others, all of them memorable.

Through the direct exposition of Sabu’s diary entry the reader is oriented to the current state of the world and the existence of an indestructible and illegible map that may have been drawn with the mind instead of the pen, in addition to the powerful Hevon Gems, tied to the planes of existence,
‍
‍They appear to be attaching themselves to our souls.

Through extensive dialogue we’re reminded that Miro, the antagonist, is out there and he’s chasing something bigger than the conquest of territory, but what is it?

"It is a name that tradition says must never be spoken aloud," Valkar confirmed, "among our people a name that means death and evil. A name that can bring ruin to any people."

‍During their journeys the travelers transverse through forest, cities, and seas that call to Eldar’s wife, Dwingale, in search of answers,

"It calls out to me," she continued, "there is that within there that wants to be known to the world again; a knowledge that must not be lost. I am the last that can set it free; if I don't go it will be lost forever."

‍The team works together well and their equipment and skills have increased since their journey began in the last book; for instance, Sabu is able to more quickly cast more powerful spells than before,

But Sabu wasn't finished yet. The very ground on which the island stood, far down upon the distant sea floor, began to shake and buckle, to grind itself in several directions. The sea floor shook with violence as it started to tear itself apart, the waves around the ship to grow more fierce in response.

‍Romantic imagery is central to fantasy and is one of those warm and organic elements that separates it from the hard tone of science fiction. Mark delivers once more on all fronts,

A forest lit only by the single golden ball of light hanging above it and by the light slowly-changing pastel shapes glowing down from the trees…Past bushes aglow with rainbow-colored fireflies, under vines that moved and weaved about. Alongside trees that could lift up their roots and move about, and over streams with tentacle-covered fish…

As he nodded to her, he watched as both she and her bird seemed to fade away, as if but a pale image upon the winds…

The red crystal dome was now a hundred feet or more up in the air, capping what seemed steep walls of blue crystal that fell away into the water like sea-side cliffs. The ocean's waters splashed around at the edges of this strange island of crystal, lapping against its newly found shore…The stormy image exploded outward, a circular plane of water, swirling winds, and lightning, blasting suddenly outward at tree-top level, as fast as a sonic boom, as loud as the roar of a great dragon. Splintered branches and leaves suddenly showered down everywhere, mixed in with a thin warm mist of water and a dying residual breeze.

Magic
‍
Magic is a central element to the book and gives Mark ample opportunity to draw on his imagery to convey a mystical scene. But magic has rules, whether it’s having to rest after casting major spells, creatures having elemental immunities, gem properties, or the following scene,

"Wait a tid, I thought that magic doesn't work near those cats," Eldar exclaimed…
"He's right," Sabu said, as they all felt the spell start to fade from around them, "it may be that only the magic of he to which they are bound may work."
"If so, then that makes for a rather deadly combination," Sindar agreed. "A wizard who cannot be affected directly by magic, yet his own may work, as well as having such a deadly protector."

‍These magical scenes are particularly vivid during the sea encounters, which were also some of my favorite parts of the first Maldene,

It was only the flying snakes that it burned, as they flew about in tormented agony, the flames turning their wings quickly into dark ash, their eyes turning into puddles running down their large snake faces, their very scales turning black as if the snakes actually burned from the inside as well as from without. The closer they flew towards the ship, the worse it got, sourced as the flame was from the very ship itself…

His staff started to glow, a bright narlu haze surrounding the length of it. The glow increased…Finally, a single bolt of narlu colored light leapt from the staff, streaking towards the nearest large mast. From there it leapt to the next mast, and thence onto the next, hop-scotching its way down along the length of the ship. Each place where it touched, the glow grew and flowed down the sails, spreading along the entire width and down towards the decks…Soon, the entire ship and all aboard her were aglow with the brilliant ultraviolet color, all emanating from Sabu's up-reached staff.

A few more motions from Sabu's hand, and the glimmer at the front of the ship shifted, settling into a new shape. When it did, the rocking of the ship stopped. People carefully released themselves from their various hand-holds and looked about them. The wall of water and air was now spinning quickly about them, propelling them smoothly forward with nary a whisper of wind or turbulence to disturb their journey. 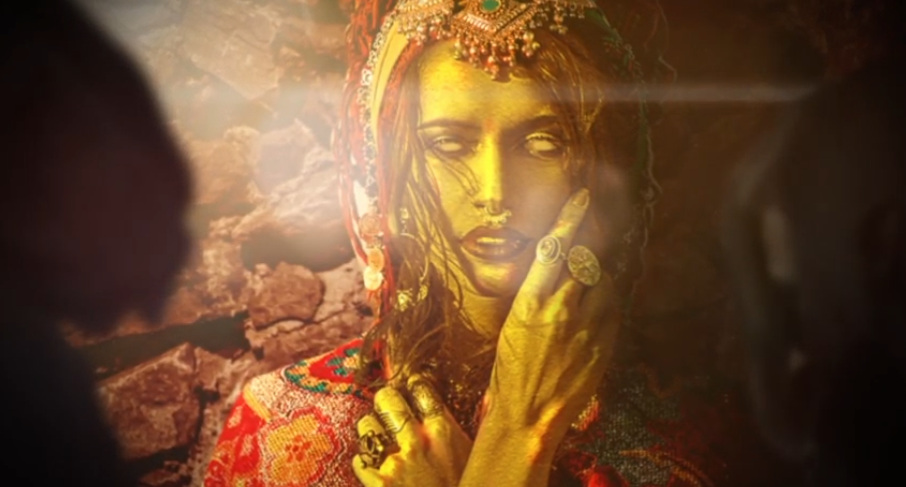 ‍From the opening lines and throughout the book you can always picture even Mark’s minor characters with a few, efficient words,

The kind of man that picks up enemies the way most people pick up dirt on their shoes- and with as little regard for them.

‍The characters show their intentions through sharp dialogue, from the manipulative Mauklo, to the faithful Eldar, to the studious Sabu who is as interested in studying beasts as slaying them. My favorite line is the golden oracle’s response in the following interchange,

"You're blind," Kilgar observed, still staring up at her vacant eyes, "yet you move as if you aren't."

She gave a small smile, looking directly down at Kilgar though her eyes could see naught. "When you can see the future and the past, seeing but a few feet around you is then no hard task."

Phrases such as, That they are portals to other planes of existence should be obvious, show a passive voice usage that continues the tone Mark developed for this series in his past novel, contributing to a feeling of antiquity. The dialogue is both clever, and charming,

“We have but to ask the Water and the Wind."
"How does one do that?" Gwendel' asked, complete puzzlement on her face. "The Water and the Wind do not talk."
"That all depends on how you ask it," Sabu said, standing up, "and I suggest we do so from outside. This could get a bit messy otherwise."

‍The creatures are a joy to see, from a silicon-based boulder lifeform (silicon can theoretically replace carbon as a basis for life), to trees with elastic cell walls, to creatures like the fire-proof telepathic power cats that disrupt magical fields and lend their mortality to their keepers. Mark’s knowledge of natural science makes his creatures more believable. I particularly liked the creatures that one has to wound with just the right amount of force to prevent regeneration or revival,

But as the knife rain ended, just as their bodies looked like they might just fall completely apart, they suddenly reassembled themselves, rising up from the ground completely unharmed.

‍Mark builds the lore and customs of the world in full, from the way time is told to the colors of light in the ultraviolet spectrum. Mark recently said (paraphrased), “I write life. In the process of creating a story as believable as possible you create a world as believable as possible…” It works well. Factions have their backstories as a whole in addition to their members, which contributes to their characterization; for instance,

"When Destir are old enough to fight," Sabu explained, "which is about the time they're able to walk, they're given a knife made from a tooth of one of the great beasts of the desert."

"No one gave it to me," Kilgar said, "I plucked it out of the creature's carcass myself! It is a symbol of my first kill."

‍Some of this lore serves the dual purpose of also foreshadowing events,

The Pugen Power Cat. Said to be one of the fiercest predators of them all, it is also a magical creature that is said to be able to even take down giants…While the adults are deadly fierce, if you can get a young enough cub, it is said that they can be made to impress upon a person, being forever bound in loyalty and companionship…

‍Mark Anthony Tierno said in June (paraphrased), “One person told me my main themes are friendship and faith, (while another) told me it’s really sorrow and hope and getting over one’s arrogance. For me, my writing is about perseverance and hope, the true qualities of any hero.”

Like Dwingale says, “A hope for a better time yet to come. Wherever there is Death, she thought, there is also Life and Hope.”

I agree with these themes, and the series really focuses heavily on characters being able to get along together despite having different races, backgrounds, religions, and intelligence levels, as each character has his or her own strength.

‍Maldene II revives all the ideas you loved as a child, from long-lost maps to ghost ships and fairies, dark wizards, diamond swords, mummies, lost libraries of knowledge, a city beneath the sea, and oracles from hidden realms, and makes them vivacious again. These aren’t just tropes that he’s checking off a list, because the lore embeds them so thoroughly in his unique world that they cannot be separated from it; he makes these creatures his own. The prose, action, and dialogue are well balanced and the writing grand. Anyone who doesn’t love Maldene simply doesn’t love fantasy. Available on Amazon.