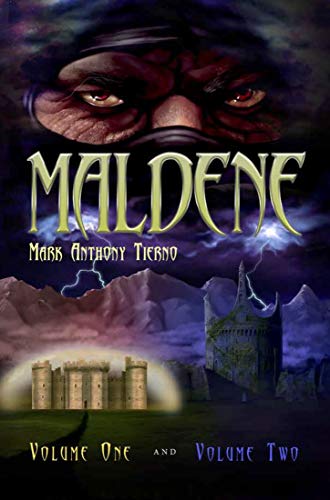 This week we're shifting gears to a top fantasy novel set to delight fans as we look at Maldene by Mark Anthony Tierno. And who better to build a fantastical world than a physicist? Discussing the book with the author, he's as passionate about the book as his characters are.

The recently re-released fantasy novel, Maldene, offers an epic story with fantastic use of language. From the start of Maldene, beautiful images greet the reader. The planet itself is described as,

Picture a planet, giant Earth-swallowing sphere, swaddled green with the color of life, the glare of its giant blue star glistening off its atmosphere in colorful, almost aurora-like, bursts of light…Situated in the center of Space, at the Doorway to Time, on the precipice of Fate, such is Maldene. Birthed by the Power of the Eternal Flame, seeded by Chaos, nurtured by the Olden Gods, and brought to fruition by the knowledge of the Ancients…

‍We’re soon cast onto a ship in a storm where an elf, Eldar, and two humans Sabu and Bronto are traveling until the winds begin to act strangely,

A cold wind from the North was filling the row of five hemispherical sails of the wide ship, as if eager to hurtle its passengers towards whatever Fate awaited them…The frothy wind was kicking up the waves like some angry kid. Sabu could feel an unnatural presence about it, an almost feeling of magic that his skills couldn't quite pin down.

‍The book’s metaphors add spark to the imagery to place the reader in the scene. They intensify the action without distracting from it. They are unique enough to be original, without being so abstract that they must be over-contemplated, maintaining the reader’s flow,

Thunderous crack; a peal of lightning casts a transitory scar across the face of the sky.

And,
‍
...followed by a second stroke of electrical death that, hitting with the bang of creation, turns her into pyrotechnic confetti drifting upon the wind.

‍The writing style is beautiful and has a tint of a Victorian feel to it, appropriate for the genre. At times, a few grammatical errors with tense agreement and the use of passive voice can create interruptions to the flow of writing, but this is a small price to pay when the writing itself is so eloquent. The use of passive voice does add a unique tone to some lines that end up reading more like poetry than prose, and, sometimes this is a good thing,

Mystic words were spoken upon the air as outstretched hands bid magic welcome.

Mark mentioned that the writing style was developed specifically for the book, and he wanted parts to have a "quasi-poetic feeling." The writing is full of charm as well, such as in the following scene, when Blag-Ak, an ogre, finds a severed head in the sand and thinks to add it to his collection by lifting it,

It screamed and refused to budge. That's funny, he thought, it's glued to the ground. I'll just try harder. So thinking, he pulled hard on it, the head continuing to scream for a moment, ending with a rather sandy popping noise as the ogre suddenly found himself holding a three-foot person several feet above the ground by the head. Oh darn, he thought to himself puzzledly, it's not a head.

‍The efficiency in which the author draws up his characters reminds me of Tolkien or Salvatore, conveying in a single paragraph what the character’s all about,

While Quickfoot had caught the eye of one of the girls, the little woodling's appetite for more food and silverware quickly overrode his desire for flesh. As such, he had found his way to the kitchen with the speed and accuracy of a bloodhound on the trail of a female breeder in heat. He'd lodged himself in one of the cupboards, jamming a cake into his mouth while simultaneously trying to put a porcelain plate up his shirt, his pockets occasionally jingling with the sound of his dinner-time acquisitions.

‍After surviving a shipwreck and escaping an elaborate trap, the characters encounter a variety of other obstacles, from a flock of birds that are actually paralyzing plants, to drinking contests at a traveler’s inn, to ultimately meeting a host of dangerous villains in various guises. In future novels, Mark has informed me to be prepared for some drastic cross-genre plot turns that will attract a variety of audiences.

Each scene is fully developed and told from multiple character viewpoints without redundancy, moving the plot along at an even, steady pace. The clarity of the writing avoids any confusion, yet the writing does not patronize the reader, either, making allusions to everything from Greek Myth to Hinduism (Indra). While the book has many intense action sequences, violence is not the central focus, it is the friendships and journey that the characters take as they meet new people, form new allies, and keep watch on old ones. Strong female leads develop as the book progresses providing a balance in perspective.

Maldene is an epic novel told through two volumes (also available concurrently). Those who like high fantasy will adore its characters and descriptions of a vivid, imaginable world, and its full development of each scene, engrossing the reader in a believable world. Overall, I would highly recommend the book to an audience who likes high fantasy and other speculative novels, or enjoys games such as DND, Pillars of Eternity, or Divinity: Original Sin. For more information head to www.maldene.com and purchase on Amazon, today!