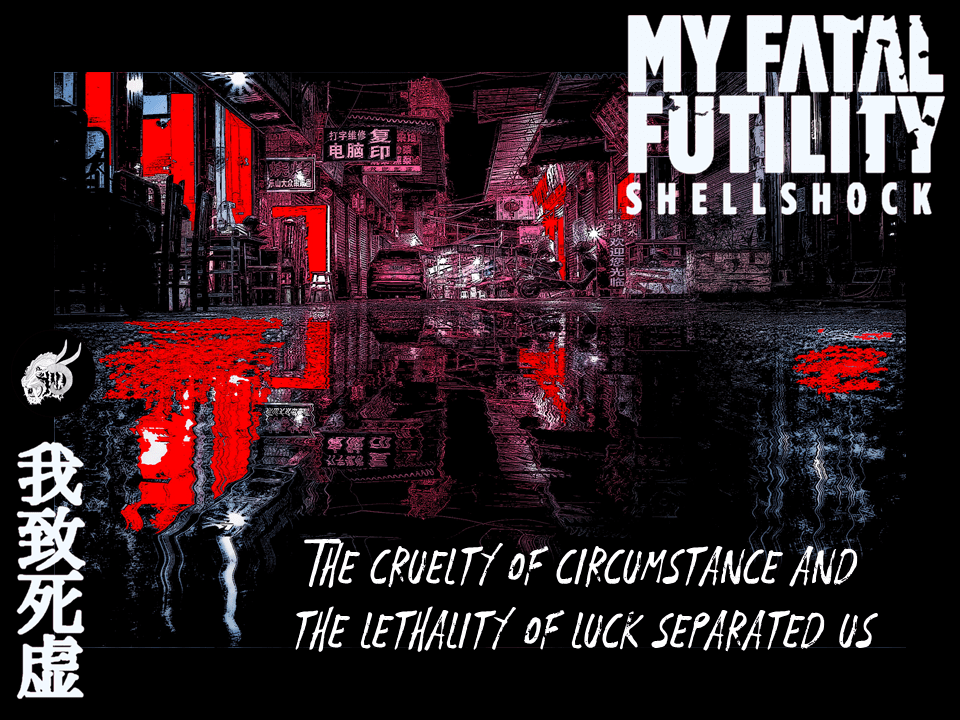 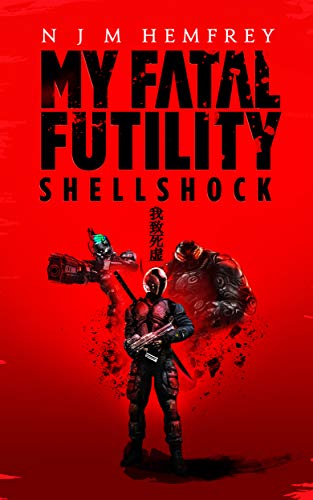 ‍My Fatal Futility Shellshock is a new cyberpunk meets time travel novel by N. J. M. Hemfrey. It's a departure from his previous work, Haxfuri, which was a dark fantasy-horror blend. The book follows Abertay Kage Carnifex, though he rather disown the name he was assigned. It's written from a first-person perspective we rarely find in the sub-genre. This perspective naturally lends itself to more character interiority than we are used to as well, even if those thoughts are driven by something outside of Kage's control that continually spouts justifications for violence. The book has a unique feel, and when Kage is interrogated in prison early-on under the guise of counseling, I pictured scenes from 12 Monkeys. Those scenes include a clever exposition of character disguised as a word association test where we get a glimpse into Kage's unconscious.

Corporations rule in the book, dictating people's lives. Those who don't play by their dictives and violate their state or corporate contracts become lumpen proletariat, which the book calls Ganglanders. These outcasts pose a threat to society, and are forced to still carry their former host corporation's logo in the form of a tattoo that they just can't shake off, a powerful symbol. Kage was produced by a now defunct corporation, and is picked up by another, who restricts his freedoms while philosophizing about freewill:

"You may possess free will...but I will not suppose that you actually believe in absolute control."
‍
I squeezed my fists together. "But I have to take absolute responsibility."
‍
"For what lies within your control. You are not an omnipotent, omnipresent, omniscient deity. The universe does not bend to your will."

Hemfrey pulls off such scenes well with the psychologist, Dr. Stynar (perhaps a reference to Styx and Lethe). The author's sociological and philosophical background come through to give the doctor credibility, and one can almost hear Hume in his connection of freedom and responsibility. We also see the author's background come through in one-line adages such as, "Meaning, or the lack of it, motivates every emotional outburst," and, "When you disrespect your career you disrespect yourself." The latter statement shows the synchronicity of occupation and identity under the corporate-controlled world.

As the book progresses, Kage's past catches up to him, and loyalties become tense as conflict ensues. Kage eventually lands upon a chrono-disruptor, a time machine whose secrets are outside of his control.

The pacing is pleasantly slow at first for cyberpunk, and each scene is fully developed the way fine fiction is (think of the pace in Jeter's Noir). This allows suspense and characterization to build. The quality of the writing keeps the reader engaged, not to mention the surreal ideas, such as a utility crab that delivers meals. Only in cyberpunk can you get solar lances on one page, and teleporting masses of squid bots on the next! 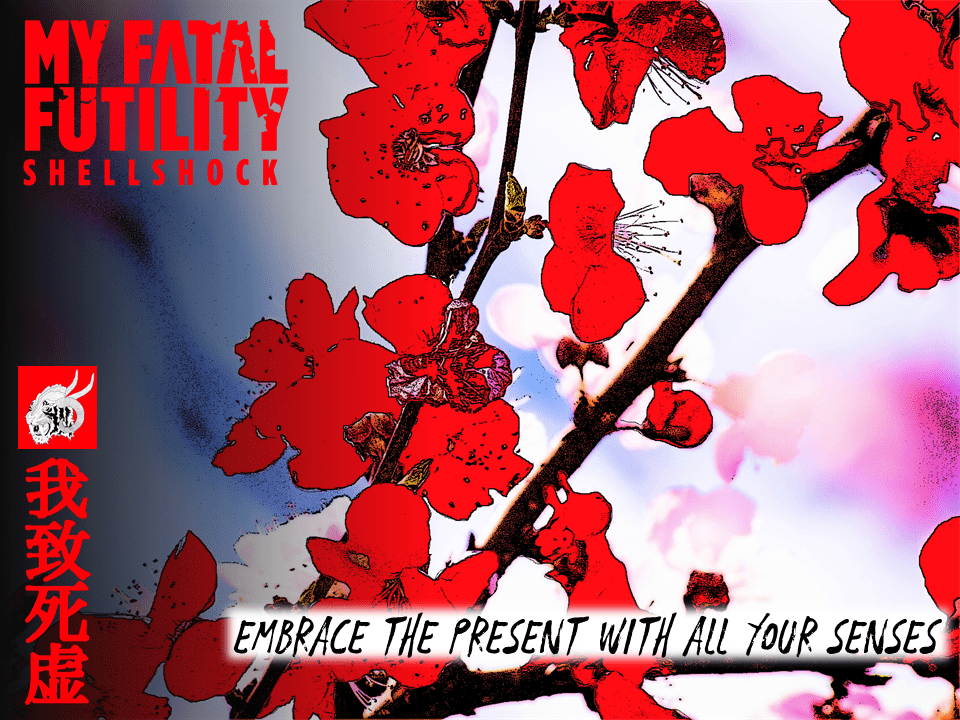 Writing Style:
‍
The first thing Hemfrey's readers will note is a change in content and tone from Haxfuri:

Haxfuri hurtled through the bellowing storm and urged his muscular steed, Kai, deeper into the Woonwari Woods. His bloodshot eyes started down at the chittering body draped over his saddle. Obscene symbols had been scorched into the unconscious man's armor, and blood drizzled through his full-face helm and onto his crimson steel chest plate, which bore the black symbol of a long-winged void dragon. --Haxfuri excerpt

To a more cyberpunk tone:

The rhomboid knuckles of my armored gloves moved like pistons as I flexed my fingers...I could feel the magnetic-levitation-and-capture-fields lightly materializing whenever I bent my fingers a certain way. My void-cutter suit had been given a jet-black paint job...and a neon-red symbol glowed on my chest plating...another second passed on my nanotrix's digital clock. --Fatal Futility excerpt

There are vestigials of fantastical cant in Fatal Futility, such as describing the armor as having metallic skeletal-veined webbing with an icon of a demonic tiger, but these enhance the description and Hemfrey maintains the cyberpunk tone well.

Metaphor is wonderfully employed to bring scenes to life:
‍
The man's cybernetic eyes resembled smouldering coals, glinting at me...

Silence passed between us like a snake silently stalking a mouse.

There's a true awareness of body sensation in Hemfrey's writing:
‍
(I) could sometimes still taste the powdery puffs of shards bursting from the walls and floors that I'd dented their robotic frames into. I'd really loved the fizzling sound of the sparks sputtering from their crushed circuitry.

Action:
‍
Plenty of action ensues, and its derives from more than just street thugs high on the latest neuralmod:

"The roppo-hyaen," the holo-professor announced... They will not allow anyone’s presence in their close vicinity. A roppo-hyaen’s eyes have been specially modified and uploaded with constantly updating information packets that inform the creatures of how to discern friends from hunters and poachers...."

The cluster of roppo-hyaen suddenly dispersed and sprang onto the trees around them. They hopped and lunged between trunks, more agile than monkeys, and I noticed showers of needles bursting free from their stripes....

The skeletal turret rig attached to my legs and arms, thrusting the mechanical limbs that controlled the gun in my hands, and the stapler-sized triggers into my fingers. Holo-screens activated and conveyed the area outside of the ship. White clouds swirled about from solar beams...cobalt explosions of electricity suddenly erupted.

I often thought about the first time I'd lashed out. I remembered the hyper feeling that came with impaling my fist through the radiator-shaped head of a bouncer bot. I'd really felt life burning through me as I'd pulverized the piston-clad limbs of those two-metre machines, and crushed their white tessellated plating.

Notice how despite the long words and sentence structure, the above paragraph still flows with a staccato cyberpunk rhythm. This owes to alliterations like pulverized piston and metre machines. A lesser writer would stumble over the best syntax to convey this.

On a downside, the writing has low immediacy due to the distancing language present. The first-person perspective offsets some of it, but some sentences contain two immediacy issues each, such as, Looking at the view screens I saw, or I glanced and watched. This decreases the impact of some sections, but does not impede the overall enjoyment or immersion much.

‍
A powerful foray into cyberpunk that will leave fans happy. The pace leaves room for the text to breathe, and immerses you into its character and story. Definitely worth checking out! Check out the video review below and see more on his website. 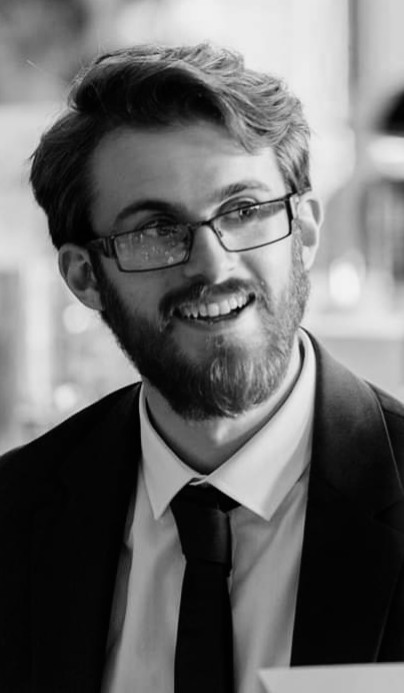