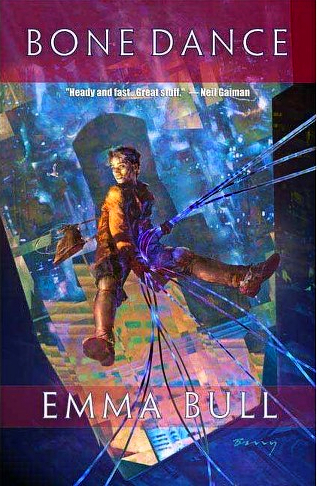 ‍Bone Dance was written by Emma Bull in 1991 and released to numerous award nominations. The novel combines science fiction and cyberpunk tendencies with urban fantasy. The neutral pronoun zir will be used in this review. Spoilers ahead.


The book takes place after a nuclear apocalypse. Though much of society still functions, right down to its tollbooths, it has lost much of its media and technology. The protagonist, Sparrow, takes on a quest to locate the media of yesteryear for an interested purveyor, ending up far over zir head.

Happiness in the land of Deals is measured on a sliding scale. What makes you happy? A long white silent car with smoked-glass windows, with a chauffeur and a stocked bar and two beautiful objects of desire in the back seat?

After breakfast I would hail a cab… (to) the western outskirts of the City, where a culture-vulture knew of a sealed-up basement holding the remains of a video production business….But it had chaos hidden in it. Cancers start that way: a cell or two, mutated, dividing, secret for weeks or months until suddenly the transformation announces itself, and the whole organism quails in the face of it.‍‍

‍Sparrow’s memory has been partially compromised, leading to a surreal journey through the underground that has zir interacting with street gangs involved with hunting down, or supporting, the Horsemen of the Apocalypse. These Horsemen are metaphors for the exploitation that has taken hold of a society in dire straits, with some being responsible for the nuclear attacks:

(The Horsemen were) four people who had never done a decent thing in the world and never would. They were the highest accomplishment of a subset of humanity who gloried in degradation and cruelty, who saw everyone – even each other – as lab rats and Judas goats.

Sparrow doesn’t know who to trust as the stakes get higher, and pushes everyone away in self-imposed isolation. Part of this is due to zir embarrassment of zir own androgyny. Overall, the community accepts Sparrow, as they simultaenously poise themselves to betray zir.

Eventually (major spoiler), Sparrows learns zir is a programmable vessel for the Horsemen to possess, able to be implanted with computer skills and other aptitudes. That scene hits more like horror than sci-fi, which Bull even references thereafter, But one of them had risen like a horror-movie menace. Sparrow's realization that zir is at the whims of the exploitative Horsemen, and no more than a body to them, makes Sparrow feel even more ostracized by others as they discover zir secret. 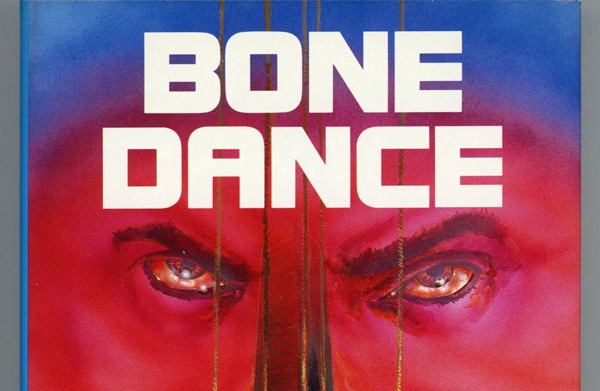 Writing & Theme:
‍‍
‍
The writing is quite good, but the plot is confusing and poorly paced. Bull wontfully spends four pages in a row discussing what every pointless item in a home looks like, but refuses to take four sentences to describe what’s going on with the plot. While disorientation is one of the hallmarks of cyberpunk fiction, cyberpunk readers can handle it when the confusion comes from virtual reality, not when it comes from cross-genre tropes such as Vodun ritualistic body snatching.

Crossing genres is an issue because the reader doesn’t know what to expect. For instance, the details surrounding a dead body in Sparrow’s apartment don’t make sense to a sci-fi reader given the order of events, but the fantasy reader would view the same scene as a powerful foreshadowing of the supernatural elements later employed. Conversely, it gives the book a unique feel, which is an accomplishment in itself.

Then, item by item, each piece of hardware powered up by itself. LEDs and digital counter lit like opening eyes on all sides.

When the protagonist, and others, get body snatched, it adds a major layer to the confusion that permeates the book. This is compounded by many of the characters scarcely being able to be told apart and lacking development, save for Mick and Frances. Yet the author takes the time to clarify such things as how stale the cookies were, and the endless mentioning of pouring tea (48 times the word tea and its related terms are mentioned), while throwing new characters at the reader, who have shapeshifted from other characters, without any being properly introduced. The plot simply isn’t suited for a first-person perspective.

Thankfully, thematically it’s cool. The book’s feminist themes become apparent as the Horsemen “ride” their hosts as they control all their motions while mind jacking them. The vulnerability here, the shallowness of their using people for their body, and the lack of female mobility when one’s body is taken over is appropriately described. The scenes are well set with more than enough imagery to immerse the reader, especially when it’s combined with Sparrow’s incessant introspection:
‍
I walked through the Fair: shrill and brittle and tawdry, a savorless night with anger lying under its curling edges. A while ago this had been my country…now it was…give us your money and get out.
‍
Metaphor:
‍
I like extensive metaphors, but Bull’s are often as off kilter as my own. When they work, they are novel and counter the trite clichés one would expect:

Silence, as if the air had turned to mercury, heavy, thick, and poisonous. The woman, Frances, was perched lightly on the arm of the leather slingshot chair, the rifle comfortable in the crook of her right arm, its barrel tracking Mick Skinner. A casual sweep of that arm, and both he and I would be perforated at the waist.

Sometimes the metaphors go too far, however:

I was watching Mick Skinner’s lips so hard, I thought I might be sucked into his mouth if they opened. The whole room might; the space behind his teeth was such a vacuum it would take the whole room to equalize the pressure.

There was a car in front of the building when we got there: long as the course of history, black as a killer’s thoughts…

Death is a hypothesis that can never go untested.

‍This does give the text a rather noir tone at times, however, while eccentrically humorous at others:
...I needed a walk in the garden. The front door didn’t object to the idea.

In two cases, Bull is unable to find a good Metaphor, and feeling oddly obliged, apologizes to the reader, such as in the following line: There are no similes for the way I felt, leading her into the building…

The world is interesting and quite surreal, with mystical new-age factions, and groups such as the Jammer culture - drummers who share a collective mind, though they aren’t as cleverly integrated as in Neal Stephenson’s Diamond Age a few years later. Despite its excellent writing in sections, pacing issues and disorientation makes its worth questionable as a sci-fi or cyberpunk novel. But what about as an urban fantasy?

Neil Gaiman has gone on record as loving it, and no doubt, as parts read like American Gods (which, granted, was written a decade later). Trying to write a cross-genre fantasy that takes place among street gangs without sounding like Shadowrun is a worthy challenge for any writer, and one must admire the imaginative scope in doing so, especially for thirty years ago. But far too often I found myself asking who is talking, why are they there, and whose side are they on? While that’s a perfect representation of Sparrow’s uncertainty and insecurity, the constant confusion of the protagonist leaves the reader not so much intrigued to unlock the story’s mysteries, but instead to turn to books with more grounded plotlines. While books like Null-A somewhat thrive on this model, Bone Dance, great as it is in parts, falls just short.

I seldom rate books, but I give this one three out of five stars. Great for some audiences, and considerable in its influence, but technophiles should search elsewhere.