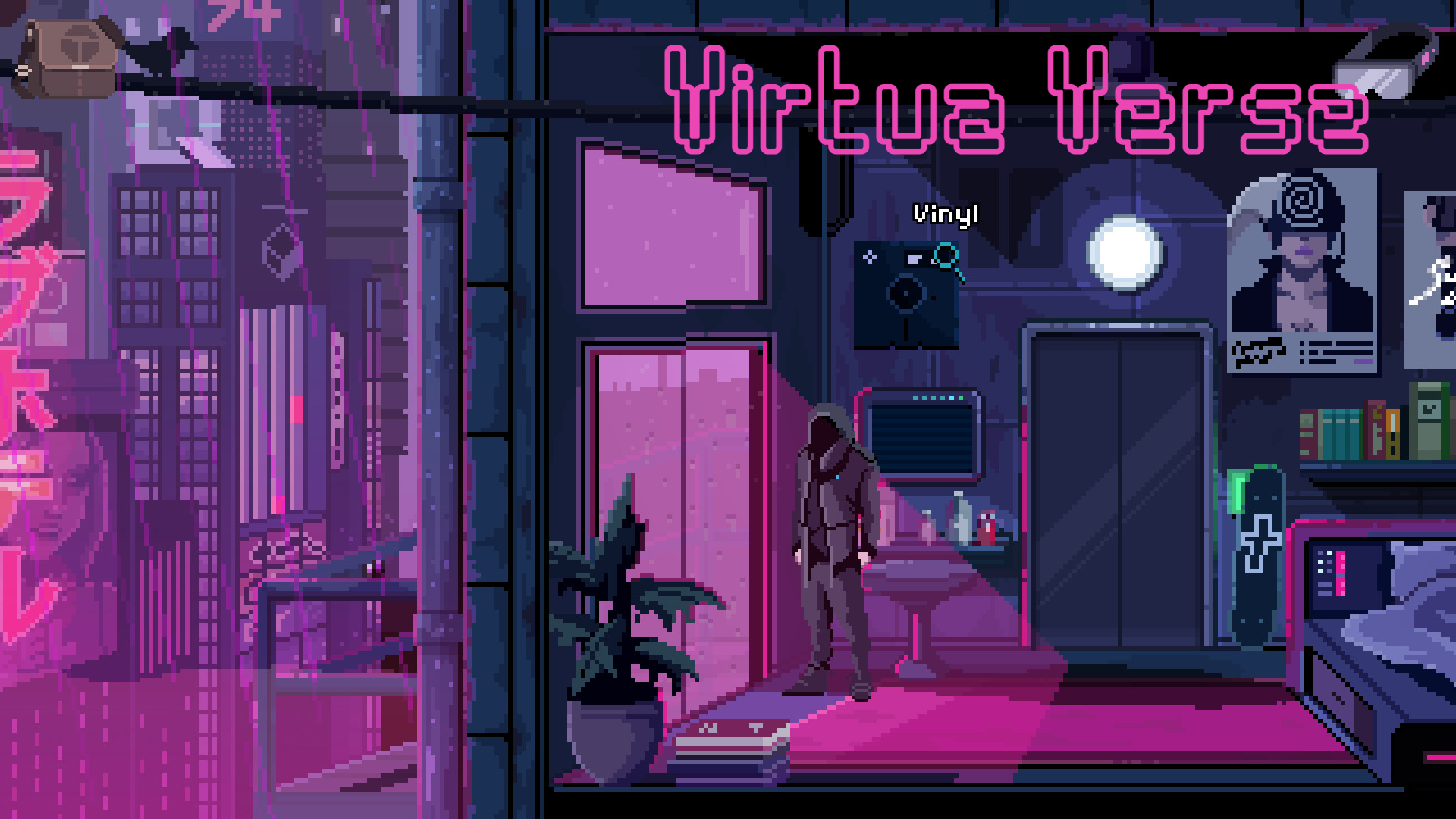 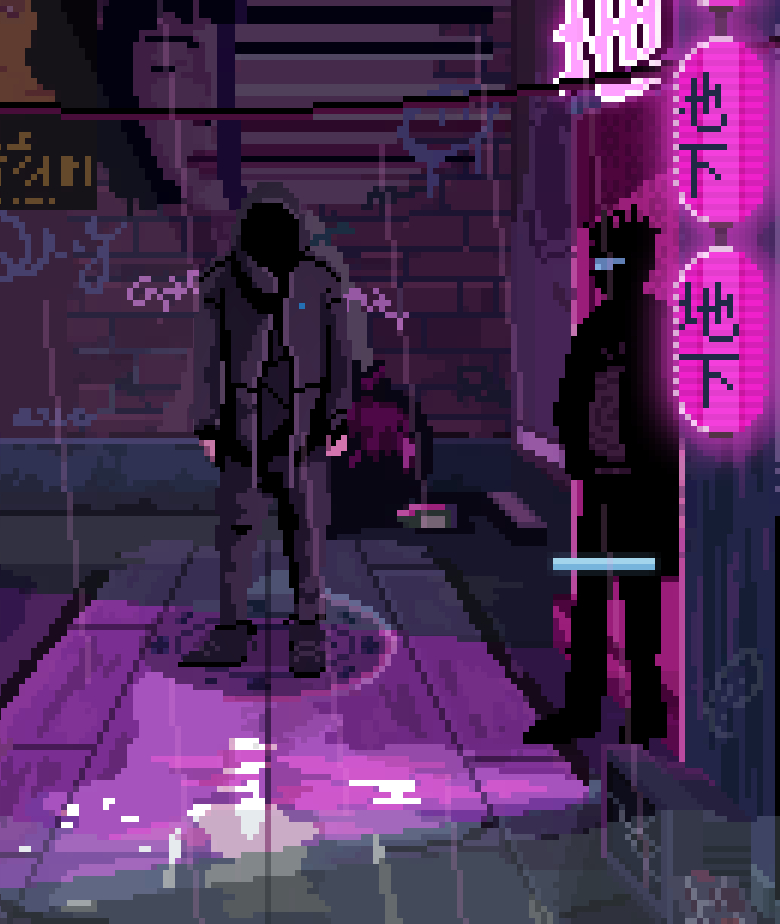 Virtua Verse is a classic point-and-click adventure game for PC that released in 2020. While the game doesn't do anything to move the genre further, offering little in the way of player choice or non-linear exploration, those who like cyberpunk will be enveloped in its dark chiptune music performed by Master Boot Record, its pixelated graphics, which are at the right resolution to be both beautiful and retro, and most of all, its thick cyberpunk atmosphere.

You play as Nathan, who has little in the way of characterization, as he searches for his girlfriend who has vanished. He's the classic cyberpunk anti-hero, though unfortunately you can't stop him from ruining everyone's lives around him to fulfill his very pedantic purpose. There's very little story or world building to speak of, which is odd for a game in this genre. Consequently, there's not much foreshadowing of what happens later.

Chapter I starts out with an escape room type scene, which works. As you proceed, the puzzles are not on par with say Riven, or Monkey Island, but they function overall and are at the right difficulty level. Using your inventory, you combine and use items to solve them, usually with very few clues to go on. Some of the puzzles rely more on observation than clear out inference or deduction, but pixel hunting is kept reasonable. Puzzles become more complex as you go, but part of this is because they require more backtracking to previous locations. Overtime as new locations unlock, this can become laborious as you check for new interactions available, switching VR on and off to view scenes both ways for clues in augmented reality.

Occasionally, solutions that would seem to work don't. Having three types of screwdrivers still doesn't open everything they should. Using a broom to knock a loud radio into the water to get someone's attention doesn't work, and of course you can't just yell at him. In one scene you have to obtain a touchscreen to connect to a computer monitor that for some reason is in an electrical box, but of course you can't use your phone as the requisite touchscreen even though you're an electronics wiz.

The main issue is, however, that the problems aren't realistic. Like trying to get inside a dumpster when a beggar doesn't want you to, or trying to repair your VR headset but there's only one place in the city that you can do so, which for some reason has a bouncer who won't let you in. Trying to get wares from merchants who just refuse to sell them to you, but somehow stay in business. Or not being able to buy basic components you need online even though the internet is ubiquitous. It's ridiculous. That doesn't mean it's not fun, however, and I enjoyed it overall.

It'll take about 10 -15 hours to beat. Play the generously long demo on Steam and see what you think! If you like the demo you'll probably like the game. 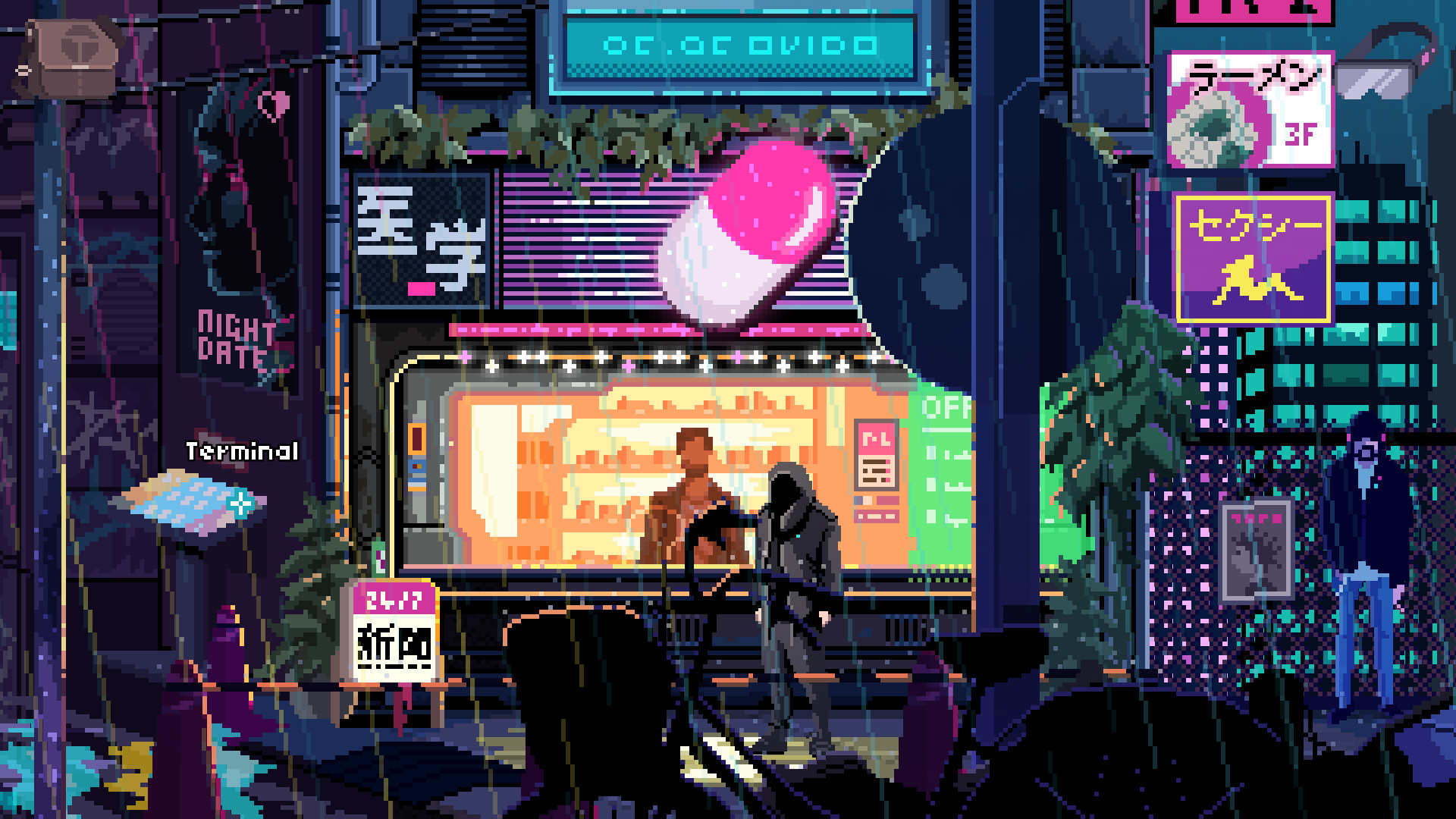