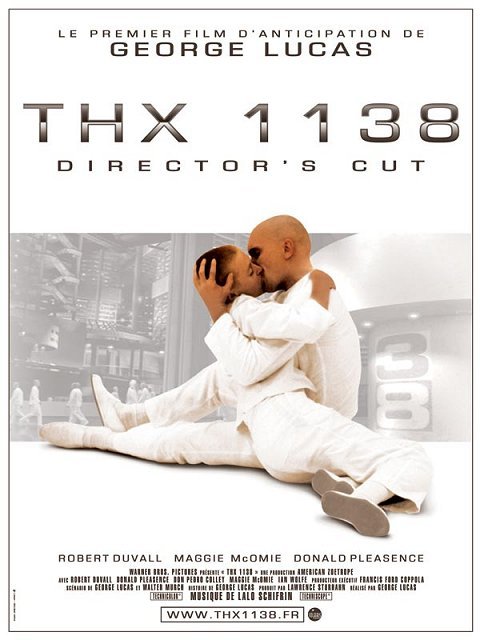 Intro:
‍
‍THX is a cyberpunk, dystopian movie from 1971 directed and co-written by George Lucas, produced by Francis Ford Cappola (The Godfather), and starring Robert Duval. It explores totalitarianism, virtual simulations, and human freedom, and combines equals elements of The Matrix, Bladerunner, 1984, and Logan's Run. This review covers the director's cut, which appears to be remastered, and contains significant spoilers.
‍‍
Plot:
‍
THX (Robert Duval) is a man who works with radioactive material in a powerplant where productivity rules over safety protocols. The workers are imprisoned in a compound that's monitored by faceless guards, as their oppressors are simply every man, and they compete to see which plant can score the lowest employee death count for the month.

Workers are referred to as accounts, and each part of their body has a number. At one point guards are advised to punish THX by hitting him in his 321, then his 21. When the worker costs more to maintain than his or her productivity is worth, they're terminated. Until then, they're reconditioned and beaten until they comply, and provided designer drugs like Blue Dendrites to suppress emotion - as in Equilibrium. Everyone speaks in so much numerical code that it's hard to tell where this facsimile of life ends and any semblance of humanity begins.

Sex is illegal, so when THX and his partner forgo their medication, their love for one another sends them on an adventure to escape the compound.
‍‍‍‍‍

‍
Film and Acting:
‍
Each screen is masterfully composed to provide an alienated, mechanical feeling. There's intense confusion and disorientation characteristic of cyberpunk, and this is represented not only by the code talk, but the constantly changing camera angles when the oppressors are monitoring the workers. The workers move like data, and in one scene children play a game where they link hands and move robotically in a binary fashion to represent ones and zeros, with THX the data passing through them. These moments are so quick and symbolic that they're easy to miss.

The characters are so drugged up that their ambivalence, and the protagonist's passivity, is well conveyed. Donald Pleasence (James Bond: You Only Live Twice) is the exception, whose wily personality provides a similar feeling as Brad Pitt in 12 Monkeys, though more low key.

The tunnels and lighting provide a convincing environment on a low budget. There's few special effects besides a hologram appearing, a trick we'll see again in Star Wars, but special effects are just a way to disguise the lack of a strong concept anyway (The Matrix excepted).

Ahead of its Time:
‍
THX is far ahead of its time. In one scene where a robot is being repaired, we see what will become Lucas' C-3PO. The white, featureless room where constructs are sent to detention is right on par with The Matrix. The level of detail is astounding, right down to the bottles they ingest to download economics courses, similar to Neo in The Matrix learning martial arts. Most of these things are not elaborated on or explained, and neural explanations are cut off in scene breaks before it gets too technical.
‍

Overall:
‍
‍The movie is obviously cyberpunk. The protagonist is neither hero (he's passive and doesn't save his partner), nor anti-hero (he doesn't act evil in any way). The dystopian vibes and virtual reality clearly prove that cyberpunk was alive and well even in the early 70's, and that in no way did cyberpunk suddenly begin once we had a name for it. The phenomenon, like any, comes first, and the name second.

There's philosophy sprinkled throughout, such as the discussion on political parties,
‍
We need a political party of dissent... (The parties) are a difference of emphasis, not foundation.
‍
‍Or how even in virtual reality, THX feels the need to go to confession, though it's unclear who the workers worship -- I assume it is the program developer.

‍
The movie is subtle and requires multiple viewings to take it all in. It also conceals the fact that the characters are caught in a simulation well. For instance, in one scene the air thins then disappears, but the characters still breathe normally. The compound is a panopticon of surveillance, yet we never see any cameras since they don't need them in a simulation. Finally, the movie gives up its game when a hologram eats the same food as THX does, and the watcher realizes this is the virtual world that can only be escaped by ascending towards the light of self-awareness in a non-drug induced state. This virtuality is brought on by the dehumanization of the proletariat in the industrial age, and the movie is primarily about alienation in the Marxist sense. Fantastic symbolism.