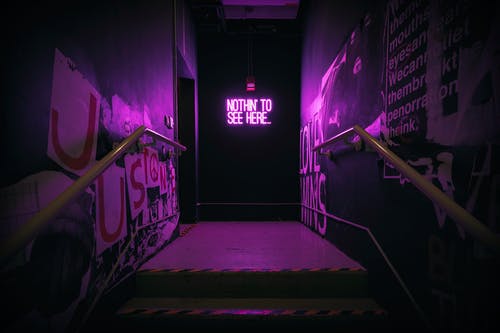 “This is a story for the survival of the sentence.”

Operation Grammar: The Metaphysical Superposition of Freewill is a cyberpunk novella from 2017 by David Samuel Neuer that deconstructs language in an experimental, postmodern style. Those who like books such as Flatland, 1984, or The Pilgrim’s Progress will be familiar with its structure, while the tone is remnant of We, which he references. Some would see the book as written in newspeak, as nouns, pronouns, and other elements of speech tend towards absurdity at first glance. Others would see the book as having a free style, as it leaves much of the interpretation up to the reader. I see the book as neither. There’s a definite message to it, and you aren’t meant to fill in the elements of speech with your own words.

The book’s written through a series of letters mostly penned by a cyborg, Noun, created by Dr. Syntax. Humans are controlled by the evil terrorist organization Ellipses. An ellipses is used when one trails off in silence; in essence, in the book humans are controlled by their lack of communication with one another and an oppressive regime repressing free speech. In our present dystopia this is quite a relevant comment, as most information out there is just noise,

Ellipsis's nefarious project is called Verb. When Verb is situated within Ellipsis, that is, when action is done silently, destruction entails. Ellipsis’s goal is to assassinate the sentence, using the Repudiators if needed, which war in slang. The cyborg Noun creates Adjective as a base of support to launch Adverb after the failure of Preposition, Conjunction, and Interjection to provide any meaningful change under Dr. Syntax’s guidance. It assists in projects with names such as Neologism, though it ultimately clings to HOPE as its impetus.

HOPE itself translates from something mechanical to something spiritual through religion as it becomes more effective,
Ellipses would not dare breach HOPE.

The cyborg's traumatized when he realizes that Verb isn't a god, but a “failed hypothesis.” That is, our obsession with doing, with producing, shouldn’t be the core of our lives. The writing is beautiful, and occasionally references classic sci-fi texts,
I now shed light on the tidal wave the floods the lungs of the drowned.

‍In an age of disinformation his words could never be more relevant,

Keep them from reading, shortening their sentences, and they will continue to believe the lies, of identity, of politics, of evil, for we have fallen in love with these lies, and so pass this information on…

Noun regains his purpose after ambiguating into Pronoun at the end. Pronoun has special abilities; it can morph, is fluid, is ultimately genderless but can take on a gender when needed. Its fluidity gives it great speed, though there are no action scenes in the book, perhaps because that would pay too much tribute to Verb, though it is said that words themselves are like bullets, and the cyborg does reflect on having to kill.

Operation Grammar is a thought-provoking short read centered on free speech that fills a unique place in cyberpunk history. Check out the book and the sequel, Amos.