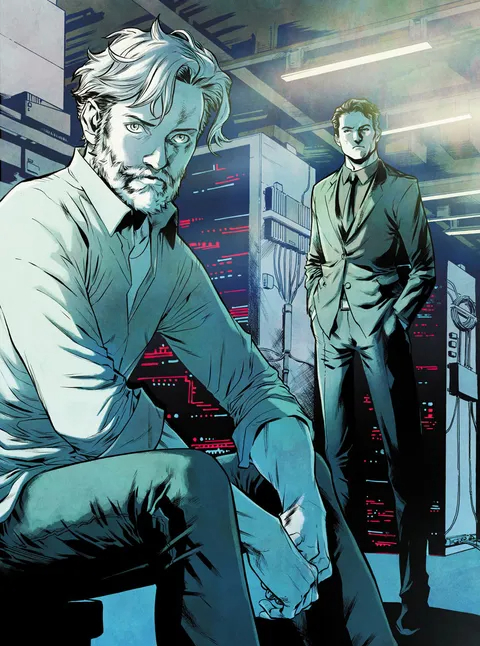 Intro:
‍
‍Hactivist is a post-cyberpunk graphic novel series based on a story by activist and actress Alyssa Milano and written and illustrated by Jackson Lanzing, Collin Kelly, Marcus To, Ian Herring, and Deron Bennet. It was published from 2014 – 2016 and has been compiled into two volumes. Some spoilers ahead.

In the real world, Elon Musk just acquired Twitter, and we’ve seen people flock to Twister and Mastodon for social media since both platforms offer decentralized servers. These servers potentially limit a business model from arising that would place profit over free speech. This is the idea behind Hactivist.‍‍

The story follows the founders of a social media company, Yourlife, who are trying to determine what’s good for society as they befriend, betray, and are betrayed by those around them. Once they see the patterns of the lebenwelt, these billionaire CEOs must decide how much they’re willing to risk to change the world.

We at Yourlife don’t see humanity as a bunch of isolated individuals.
‍We’re all neurons in a massive organism, sharing information…
dreams, passions, similarities, differences, likes and dislikes.
We’re a chaotic mess.
But with the right connections we can create positive change.

Nate Graft is an opportunistic leader who is the charismatic face of the company, and though profit-minded, he quickly becomes disenchanted with the promises of those in power. His best friend is Edwin Hiccox.

Ed is the brains behind the organization. He is likely on the autistic spectrum, and his systematic mind sees patterns everywhere, allowing for well-timed calculations during intense action scenes. He states that revolution isn’t won by coordinated attacks, its won by predicting the flow of people and information in a way that social media allows for in a disturbingly accurate way.
‍‍‍‍‍ 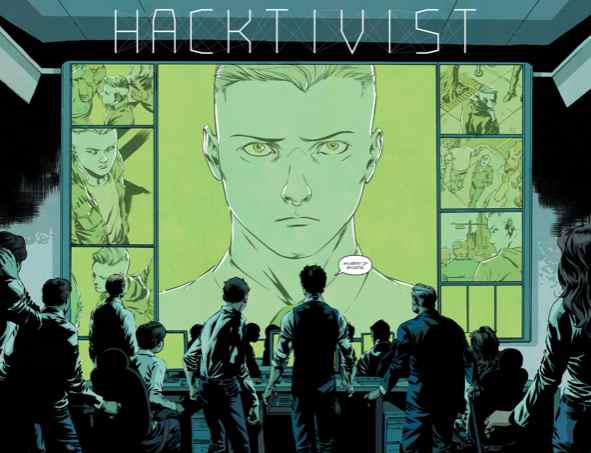 When the internet is shut down by an oppressive regime in Tunisia, Ed assists the people with reestablishing it through their cell phones, using Bluetooth to create a peer-to-peer internet that no government can stop and no corporation rules. That network is then utilized by a social media algorithm to determine who in society are revolutionaries and link them together based on proximity to oppose the corrupt government. Based on the role the internet served in mobilizing people in the recent Egyptian revolution, the plot is plausible.

Ed’s help is seen as controversial by other revolutionaries, however, due to him making decisions in an isolated social vacuum. Things change when the American government agrees to assist the Tunisian revolution by sanctioning cyberattacks, only to turn around and side with the oppressive regime in exchange for them purchasing cybersecurity software from the U.S. 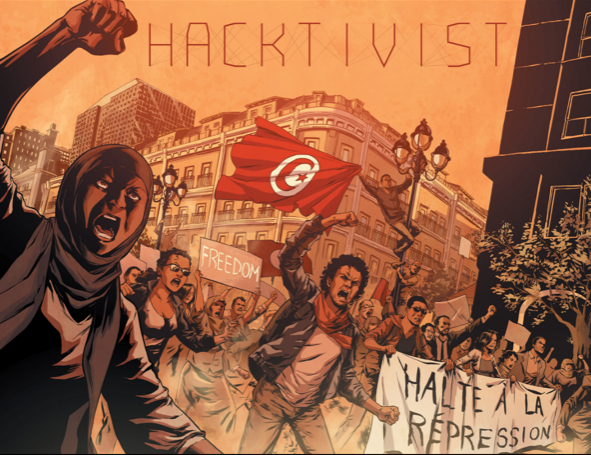 One of the neat ideas in Hactivist is malware sent through unusual transmission methods such as heatwaves to certain types of computers. Another tech the series invents are glasses which project a false image around the wearer, allowing them to be someone else through the eyes of drone surveillance. 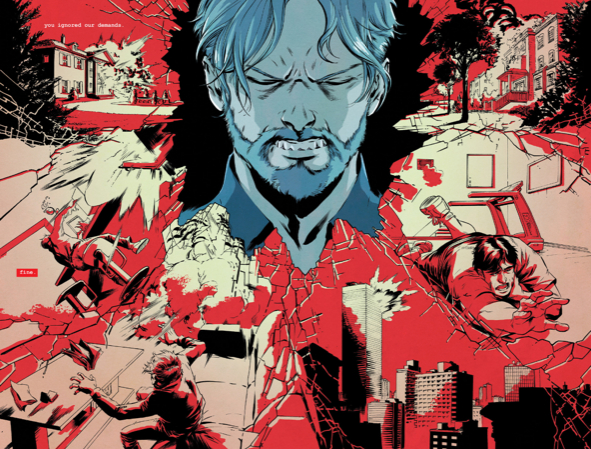 Volume two introduces Grace Decker, a social worker who supports the homeless and is disenchanted with the promises of those in power. Her approach is more violent than the pacifistic Edwin, and her cyberattacks leave almost a hundred one percenters dead right from the start. She preys on the fact that the homes of the rich are full of easily exploited SMART (self-monitoring, analysis, and reporting) technology, allowing hackers to lock down their homes, up the heat, create sparks, and initiate explosions. A.I.-driven vehicles and other electronics in this near future society are also used as weapons for the revolutionaries to achieve their goals. In a daring move, the series neither venerates nor vilifies Grace Decker and her approach, leaving it up to the reader as to where the lines of responsible activism must be drawn. 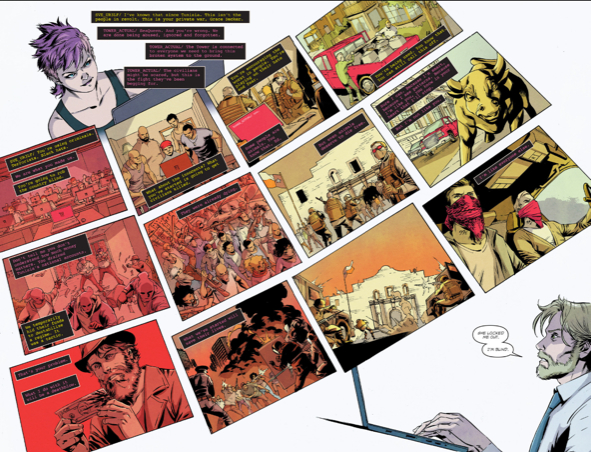 Grace is assisted by three others including a homeless revolutionary, Tamika Jones, a Veteran, and a young student, unifying people from all walks of life in the class struggle. Readers may think of Anonymous, but Grace’s hacker collective differentiates themselves, although there is commentary provided,

Anonymous isn’t an organization. It’s a culture. A philosophy. The white blood cells of a body that’s so sick they can’t do their job, creating and destroying based on choices at the individual level.
‍
‍Overall:

The series is fantastic, with wonderful artwork, good writing, and creative layouts. The plausibility and real-world applications of the plot and technology make this above average. The non-stereotyped CEOs project positive role models. The plot transcends the typical anti-hero cyberpunk noir story, which is suitably and refreshingly modern. Check it out! ‍