"But the dust cleared and there they were, hovering. It was drones! Four of them...
They weren’t responding to input commands. So we tried a short bandwidth EMP.
Didn’t work."
‍
-John Ford
(Images belong to the author/RockHill) 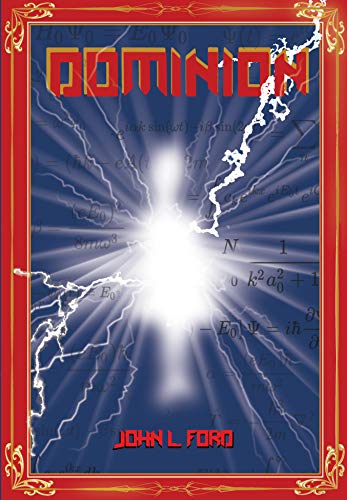 ‍When you open Dominion are you opening the book? Is the book opening itself in an equal and opposite reaction? In this first book by John Ford, he toys with physics in a mesmerizing way.

Colton is a genius but isn't appreciated by the academic community enough, giving him an existential urgency to capitalize on his discoveries. One of these is quite ingenious and sets the plot into motion. His allies tend to be on his level, which keeps the prose reading as hard sci-fi, and it's no wonder, given that his influences are Asimov and Crichton.

At the heart of the story is an artificial intelligence that almost entirely self-references, but in the words of science fiction author James Hill, John doesn't approach this like other writers. He brings both the science, and its social impacts, together according to Mr. Hill.

In John's words,
‍
Borrowed by observation of actual physiological biology, Colton uses solid state physics to reconstruct a natural paradigm only ever achieved by evolution’s miracle, the human mind. Thus, what emerges in this physical and ethereal journey simply must carry more than mere soupcon of riveting plausibility.
‍
Through accelerating technological forces on the world...we are compelled by our own evolution to satisfy an unstoppable desire for discovery. What is really meant by the phrase, ‘Artificial Intelligence’? This is what we adventure through experimental exploration into the energy of the mind.

‍In the words of author Athina Paris, "John builds his exposition with magnets instead of building blocks, each one attracting the next, fitting together flush and perfect, to create great complexity (paraphrased)."

John never patronizes his audience -- the book will make you feel intelligent for figuring it out. Although this isn't cyberpunk, the strong focus on A.I. will appeal to those with an interest in the technology. John writes slowly, building intensity as he goes, and if you're patient with the text it will reward you immensely. Get this new hard sci-fi read here on Amazon.