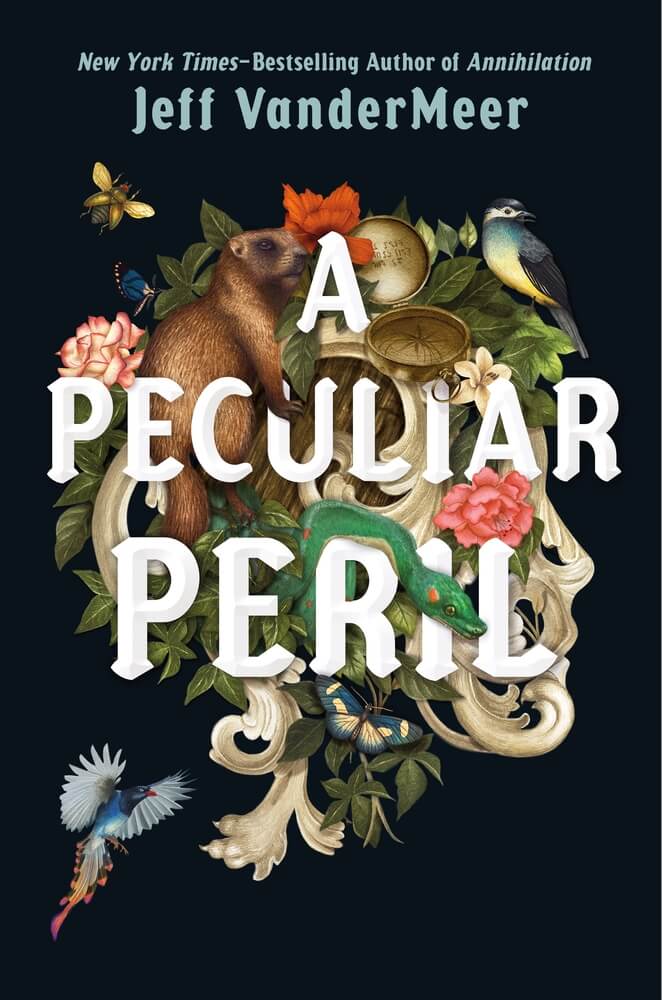 Multiple tornadoes churned through Tallahassee on the night of April 23rd; but I wasn’t running, I was interviewing local author Jeff VanderMeer, author of Annihilation, which was recently turned into a movie starring Natalie Portman. Jeff met with a small group to discuss his life, his work, and his newest projects. Having won multiple awards for The Southern Reach Trilogy and other books, not to mention teaching at Yale and lecturing at M.I.T., I wasn't sure how approachable he'd be, especially since his least favorite question is Tell me about yourself. Turns out he presented as a good-hearted man, quick to laughter, amused at life, well versed in multiple cultures, and compassionate to animals. With two new books and multiple video adaptions on the horizon, including an animated full-length film he was reluctant to discuss, he still finds the time to write.

The Southern Reach Trilogy:
‍Curious about the book, Annihilation, I asked Jeff the following, “The biologist is seen by some as being an unreliable narrator. You're never quite sure if she's perceiving things accurately, or if something is twisting her perception. How do you go about creating that uncertainty in the reader?”
‍
Jeff replied, “Annihilation is written after the main events have occurred. The biologist, she’s analytical in what she reveals. She’s not unreliable, she’s very reliable, she just has a purpose to what she selectively reveals while writing. She hides stuff about her husband (for instance).”

I asked Jeff, “How do you make it so the reader still identifies with the character, even if they aren’t sure about her state of mind?”

Jeff replied with great writing advice, “You have to deeply know the character. To do this you have to method act them – that is, you channel them in your everyday life. You pretend to be her, trying to talk from the character’s point of view throughout the day.”

I thanked him and he continued, “Some people will say she (the biologist) should have been more afraid, but I find her realistic (because I connected with her character daily).” When asked if there was negative feedback regarding the ambiguity of the novels, Jeff said, “After reading Authority, people don’t believe the answers in Acceptance. The point of the Southern Reach is to explore what happens when humanity comes across something they cannot understand, which is why there’s some ambiguity. This is different than Borne, where answers are everywhere.”

He also noted that the movie Annihilation had little connection to the book, that there will not be further Southern Reach movies, and that he is surprised when he finds even a single line of dialogue in his book that made it to a visual adaptation.

‍On Writing:
How does Jeff find the time to write with so many projects at once?

“It’s all about grit and perseverance,” he said. “Even when I had a (typical) job I would take thirty-minute lunch breaks to walk and figure scenes out. I kept notecards to write ideas throughout the day – those ten minutes a day really accumulate into entire scenes.”

Jeff continued to discuss how he creates characters. “You have to be able to write in multiple styles and textures. Each character needs a flexible voice and tone…Especially in third person you have to remove distance (create immediacy) by exploring point of view. Until I have point of view, voice, tone, and texture in place, I don’t really write the (serious) drafts.” Later, he added, “You have to be your own best editor and have good readers to succeed in the end. I sometimes go through 5 or even 10 to 15 drafts before I get the work right. Each novel is a different experience. Sometimes you want the characters to look rough, to sound rough, so you edit them less to capture that unedited (raw) experience."

Overall Work: Having lived in both Fuji, and Florida, Jeff has had many different cultural experiences. During the interview he elaborated to the group that his mother was a Buddhist, mentioned that he couldn’t eat squid after researching how intelligent they are, and mentioned being exposed to numerous cultures early in life including reading the great Sanskrit epics. All of this permeated his world view and sept into his work unconsciously in way that was hard for him to identify. Jeff’s work is difficult to classify, running the gamut from fantasy to science fiction to outright surreal speculation. Associated with “weird fiction,” he read over six million lines of weird writing to develop his own expertise.

Where does his work fit?

Jeff stated, “How you begin and end a scene really influences the genre more than the content does. How you pace your novel and where you put the emphasis makes all the difference in what genre people will see it as belonging to."

New Projects: Jeff stated he is currently working on Peculiar Peril, a young adult book featuring a 15 year-old protagonist. The characters include the disembodied head of Napoleon and Alistair Crowley as they explore the other world of Aurora. The main character tries to find the secrets about this world that were hidden by the character’s grandfather. It is fantasy, with tiny flying deer with political views that pollinate flowers, and he really enjoyed writing it as it provided him an outlet for “slapstick comedy” which “normally I reserve for social media,” he stated.

Jeff is also working on an adult book, Hummingbird Salamander. What we know is that the book deals with wildlife trafficking and eco-terrorism.

COVID: Jeff has been practicing social isolation. The first couple weeks were stressful and he had to take a break from writing to reenergize himself. He joked that he’s been talking to plants because of the isolation, and his wife joked back, “As long as they don’t talk back, you’re okay.” One night a raccoon rang his doorbell, which he found hilarious. He believes the virus may cause more films to be animated rather than live-action.

Jeff has made great contributions throughout his career across multiple genres, and is a valuable asset to fellow readers in the Panhandle, and the world. Look for his new release Peculiar Peril this July!