Gods from the Machine - Interview with Andrew Ly

"Personal History can either empower, or destroy you."
- Andrew Ly 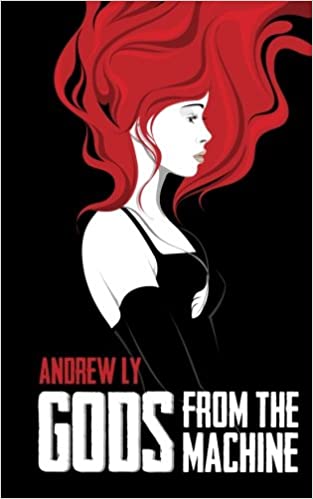 This isn't just a wise anecdote, it is a central theme to Andrew Ly's novel Welcome to the Machine, which will delight fans of multiple genres. He expounds on it in this exclusive interview...

Parachuting knights, need I say more? From the start there is a crossover-genre feel to the novel. Nick is a knight who is sworn to fight demons to protect civilization. He’s almost 18, though he’s the only one who has not yet been trained to use a weapon, invoking a sense of mystery as to what his purpose actually is, and disheartening him as others mock his abilities.

I asked Andrew, “What made you want to set the book in more modern times as opposed to the typical middle ages fantasy?”

He replied, “I think we've read enough of those from Tolkien, Martin, and the plethora of traditional fantasy authors in the past. I didn't want to rehash or be tempted to lift any elements from that deep pool just by association. So when I came up with the initial concept for Gods From the Machine, my stance was that it had to be set in a futuristic world in an alternate timeline from ours. In this way I felt I could tell the most original story, in an environment that was completely unique (to) the genre.”

When Nick is asked to retrieve a sword there is no monumental Sword in the Stone moment. In fact, he’s not supposed to even touch it. The anti-climatic feeling to these scenes almost feels like even the narrator is mocking, or teasing him, creating a convincing effect that makes one feel compassion for Nick.

Nick sank into his chair. The Second Coming was the most recent demon war. It occurred to him at that point that something wasn’t right. For years the sword had remained buried within the grave of this fallen knight, yet retrieving now was suddenly of great importance. Why now? And why was it so imperative that he not touch it?

‍Nick soon meets Quinn and his life turns around, but in directions he can’t begin to imagine. Nick was mystified. Never before had he dealt with someone he could not read.

Trying to unravel her, trying to break her down was like solving a riddle wrapped in an enigma. Nick wrapped his arms around her waist and put forth every emotion he was feeling into his lips. It was everything he imagined it would be and more, like kissing a goddess. The sound of cheers seemed to drown out, as if the whole purpose of his life was fixated on this one moment.

‍I asked Andrew, “So Quinn is not submissive in the book. She makes the first move, or advance, on Nick. She’s the first to kiss him and her hidden knowledge provides her the edge. Do you feel society is changing in this way so that it’s more acceptable for women to ask men to marry them, or to make the first move?”

He replied, “Yes! I do believe we've come a long way from olden times, and nowadays it's much more acceptable and even encouraged for women to make the first move. For Quinn's character, I tried to shape her into that modern woman who goes for what she wants, to illustrate that she's not going to sit on the sidelines and wait to be swept up by a fairytale prince. She's got fiery hair and a personality to boot!”

Nick comes upon an inscription that shows how classical ideals and values are at the core of the novel, fitting within standard fantasy trope,

My life has forever been intertwined in servitude, but I have no regrets for a cause that is just. With the knowledge that the coming dawn will be my last, I vow to fight until my dying breath. Bravery, Justice, Wisdom, and Peace are the core that lay in the hearts of the men who stand with me. My brothers and I can never surrender no matter the obstacle, for the day man loses the will to fight, that day will mark the end of life itself.

Andrew sprinkles enough lore throughout the story to fit the genre’s conventions, whether it’s angel feathers or the story of how a mountain got its name, but he efficiently writes it in such a way to tie it to what the characters are experiencing or feeling,

“Well, the story goes that during the Great War, a demon known as Bergice slayed fifty of the most elite knights singlehandedly. He was cornered at this exact spot where we’re sitting now, and with his power to control ice, he froze fifty soldiers, smashed them into pieces and spread their remains to cover this mountain to mark this as his territory. Because of this, the temperature of Heaven’s Peak remains the same year around as a testament to the cold way they were so brutally massacred.”

‍An interesting comment made during this scene is, “Have we really learned anything? Quite frankly all we’ve learned from our past is fear. That’s why we live the way we do.”

I asked Andrew, “Do you believe the above statement applies to real life as well? That our history instills fear into us? And do you believe this fear is healthy, or that it at times limits us?”

He replied, “An underlying theme from Gods From the Machine is about how personal history can either empower or destroy you. For the main character, Nick Emberson, he has to struggle with the fears of his past as they slowly come back to haunt him. How this comes into play in the novel is something I won't touch upon as I want readers to find out for themselves when they read the novel.“However, I will say it is a very realistic viewpoint and I believe it is natural to have a little bit of fear. We all have demons in our closets in one form or another, but dealing with what frightens us proactively is the best way to conquer them. Otherwise, we'd be destined to repeat the same mistakes. Or worse, let fear run our lives.”

Over time, the book becomes more surreal with scenes such as,

What followed was something he could not believe, but on the wall was a giant framed picture of him wearing a similar cloak without a hood.  Under it was a porcelain bowl with water on a pedestal. The entire congregation rose to their feet in perfect sync. They removed their cloaks, revealing their faces. They were all him!

‍Throughout the book there is this coming of age feeling that young adult readers will identify with. Andrew spends much time building his characters and exploring their relationships so that you care what happens when they’re placed in extraordinary situations. I asked Andrew, “Many fantasy authors expend endless detail creating a new world and exploring long, elaborate fight sequences with flying fireballs. What made you want to take the time to focus on the characters themselves so much?”

He replied, “I believe the crux of every good story hinges on the shared emotional investment between the readers and characters. Even though jumping through the air and fighting paranormal creatures is an exhilarating scene, it really boils down to writing characters that we can root for and care about through their character arcs. If there's no connection, then it just devolves into mindless violence for the sake of it. And in order to avoid that pitfall, I believe it's necessary to be as real and relatable as possible, even within the realm of something fantastical.”

Gods from the Machine may technically be a modern fantasy, but it doesn’t read like one, and that’s a good thing. The story doesn’t revolve around sexy vampires, it instead revolves around subtle, carefully crafted character relationships as a young adult becomes a man and finds the world is stranger, more dangerous, and far more beautiful than he could have ever imagined. Available on Amazon and at fine booksellers. Check it out!
‍