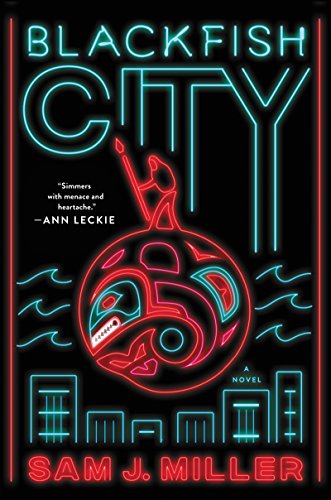 Intro:
‍Blackfish City is a solarpunk novel by Nebula award-winning author Sam J. Miller. It takes place in the near future, where most of the world is underwater from the effects of global warming. Much of the population perished during the floods, many while clutching their favorite commodities rather than their loved ones, which we’ll contrast with the book’s familial themes. Some spoilers ahead.

The City of Qaanaaq survived in frigid waters due to being located above a geothermal heat vent, though the homeless barely stayed warm in their coffin-tight boats. The city without a map, as its described in info-dumping broadcasts, has multiple layers separated by class in typical cyberpunk, dystopian fashion. The technocratic city is ruled by artificial intelligences with weak shareholders operating behind the scenes.‍‍

‍Qaanaaq was governed by a hundred thousand computer programs…The Sys Wars…spawned a terrifying array of uncontrollable malware… Whole countries watched their infrastructure crumble not through the agency of foreign antagonists, but under the mindless attack of rogue rootkits and autarchical worms…They banned political parties, which… (had) been vehicles of mob rule and mediocrity more often than efficient strategies for decision making.

The A.I.s, far from benevolent, are unable to be protested or contested,
You could scream at a data server farm…without getting anywhere.
Even if a mob burned one down, there were dozens of backups...floating in bubbles orbiting the geocone…
Programs can only be as objective as they’re coded to be.

The book follows a fighter who is paid to lose, Kaev, a young hedonist, Soq, a public relations specialist, Ankit, a gang leader, Go, and many others in alternating chapters. Each character is a moral shade of grey, distinct, and memorable, though there’s little description of their faces. Most of the cast changes throughout the story, from Ankit’s gathering of courage to Soq’s realization that perhaps the entire city doesn’t have to be razed to the ground to save it.

The most mysterious figure rests on the edge of the novel for the first half, a woman known only by legend and her occasional, wrathful appearance: The Orcamancer. This is risky to write, as her fabled presence adds intrigue, but many books would fail once such a character became fully incorporated. Miller does well to hold the mystique even after her revelation by pairing her presence with unexpected family reunions.

Note that one character, Dao, does seem poorly named given his role of protecting a power-obsessed mobster.

Images used under fair use for scholarly review.
‍ 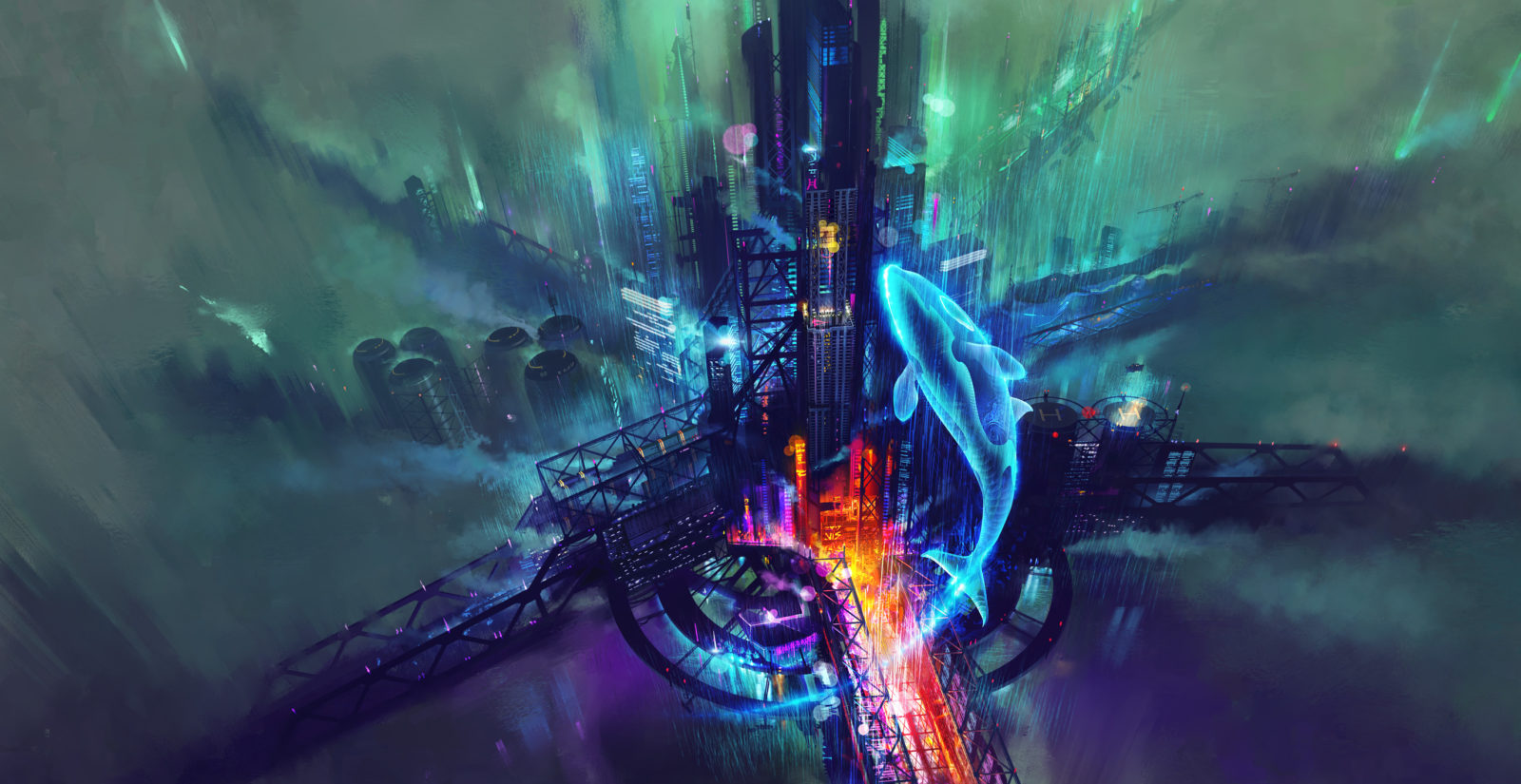 Story: ‍
‍The Orcamancer is one of the last nanobonded people. Thanks to a virus, these empaths have an incredibly close bond with their power animal, which for her is a killer whale. She seeks to reunite her family and to heal society, and will extract revenge on any who stand in her way.

Zealots chastise her, “That woman. That abomination. Who has welded herself to Satan. Who rejects the dominion God gave us over the animals and uses witchcraft to merge with them…God made us distinct from the animals for a  reason.”

Compare this to sociologist Lynn White’s (1969) essay, (Under Christianity) God planned (nature) explicitly for man's benefit and rule: no item in the physical creation had any purpose save to serve man's purposes. Miller late writes as if conjuring Engels, …superstition is being used to focus the angers of a desperate populace on the wrong target…

‍As time passes, the orcamancer slays her way to break a woman out of prison, without spoiling too much. She is, as nature is in the book, Unstoppable. Unresting. Unyielding. Forever fighting a line of invisible enemies.

Nanobonding is transmittable and is wrapped up in the breaks, a pandemic affecting the population that causes one to experience others’ memories while decomposing the ego. This is clarified in the suggested name for the disease, Identity Dissolution Syndrome. Miller clarifies that this is like a virus, but basically an epigenetic meme. Nanobonding doesn’t so much as cure this disease, as self-actualize it. The bond occurs through sharing blood, the shared blood also representing the power of family.

This is what family is. What family does. Was it magic, some supernatural quirk of DNA recognizing its own? Or did humans simple spend their whole lives so steeped in the mythology of this primal thing called family that the emotions were already there, one-way relationships waiting for people who would one day step into those slots?

As for the breaks, people with it are pathologized, and its impacts are used as a shock doctrine to distract the population from inequality and tie the disease to sin, and thus judgment. Miller’s knowledge of Conflict Theory provides a realistic substrate for his world building.

You can win against people. You can’t win against money. Money is a monster, a shape-shifting hydra whose heads you can never cut off. Money can only behave one way. Later, Miller describes money as its own A.I.

The core idea? Nature is innately collectivistic, and the ego under the perversion of capitalism opposes it. Given that we are a eusocial species, the idea resonates.

We live our whole lives suspended above the sea…but we forget the true taste of salt. Not the purified stuff we find in kitchen cabinets…The bitter, foul, sea-muck stuff we crawled out of, and live beside, and one day will return to.

With the bond between humans and animals being central to the book, it’s interesting to note that Miller used to work for his family butchering business before becoming a vegetarian (as a sidenote, I am also a vegetarian; isn’t there enough suffering?).

The Orcamancer with all her wild rage and animalistic empathy represents nature. Just as nature was almost destroyed by global warming, her family and her fellow nanobonders were almost wiped out by zealotry. The analog is made clear when, as aforementioned, zealotry and dominance over nature is tied together. She is untamed and her perseverance ultimately triumphs. As for the zealots, they end up chanting 1980’s video game chiptune soundtracks as liturgy in the most hyperreal statement the book makes.

People who only know suffering from stories are never prepared to find themselves inside one.

Overall:
‍
Stories are valuable here. They are what we brought when we came here; they are what cannot be taken away from us.

There’s enough tropes to label Blackfish City as cyberpunk: Implants, overreliance on A.I., an underdog faction taking control of a classist city gone wrong, a computer hack to empower the homeless, media broadcasts built into epigenetic DNA, a ruthless protagonist guiltless of the blood she sheds, and an intro quote from Delany. However, the writing style is optimistic, not noir, there’s strong environmentalist themes, and the nihilism of classic cyberpunk has been replaced with underlying values that unite the disparate characters. The A.I. running the city would have been the focus of most cyberpunk novels, but here, it’s just an afterthought that has little plot value.

Instead, this book is the most exemplary, pure solarpunk story I’ve ever read. The book’s dystopian, but won’t drag you into the street gutters, as it reads like young adult fiction that grew into adult fiction, which isn’t surprising given that the author has written for young adults. This also drives the very quick pace and short, four-page chapters. As an aside, Milller names Neil Gaiman as one of the men responsible for making the book happen.

The writing style is quite good, with appropriate metaphors relating to the landscape. Each character’s story is easy to follow as is the overall plot, which has just enough action and a good balance between narrative and dialogue. At times, Miller holds back the full extent of his intellect for readability, though he’s does use some less common words such as avuncular and adroitly. The novel’s fun, a lot of fun, I mean there’s a giant polar bear as a sidekick in a trick I thought only Ren Warom could pull off that well; I’m just not sure fun conveys the dystopia Miller’s imagining with his casual demeanor. The genre hopepunk is also quite apropos.

Although I don’t rank books usually, this one is a clear 4 stars out of 5. It demands very little of the reader, yet provides quite a lot of entertainment, and provides insights to muse over regarding our future challenges, and triumphs. I read it in a few days, and they were great days indeed!