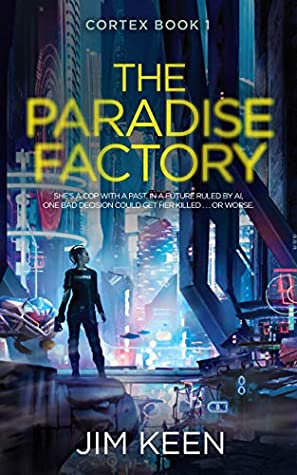 So I’ve been reading a cyberpunk book every week this year and I try to share this underground genre as much as possible, because it’s so easy to overlook this niche. I discovered The Paradise Factory: AI, Automation, and Murder in 2050s New York recently, part one of the Cortex series by Jim Keen.

Alice Yu is a cop trying to rescue her partner from a crime boss. Keen starts you with a familiar enough plot. I’ve never been much for plot in general – ultimately, when stories are deconstructed to their basic plot elements, every story has been told a thousand times, what Jeremy Jack calls “The Hero’s Journey.” What sets them apart is the way they capture the heart and mind in the process and transport the reader to a new world. The Paradise Factory fulfills both plot, as Keen builds layers upon the basic idea, and writing technique – a winning combination.

The book starts by putting you right in the middle of the action, one of the things that separates cyberpunk from most other sci-fi,
‍
Alice rolled over and spit blood into the snow…She pulled a stim-stick from her suit, jammed the glass pipe in her mouth, and inhaled the bitter powder. A second later her heart thrashed as if wired to a fusion reactor…there was payback coming when this wore off – a tsunami lurking over the horizon.

The writing’s mature with nice paragraph development and imagery,
‍
The drone showed her an augmented world view – the street ripped past in a blur, visible light supplemented by crimson infrared hotspots and cyan millimeter-wave radar.

‍But here’s what I want to really call out. One of the things Keen does exceptionally well is to appeal to all the senses. Usually writers just provide imagery, but when I read his work I can hear the whine of a riot gun charging, the crackle of burning wood, the crunch of snow beneath her feet, laughter echoing from “beer-soaked walls,” chains jangling, or the ringing in Alice’s ear. These subtle details draw you into his atmosphere by engaging multiple parts of your mind, providing a suspension of disbelief. Suspension of disbelief, for those who aren’t lit nerds, means an awesome escape for the reader. I look forward to reading more!

Check out my full review of his novella, Pattern Spec.