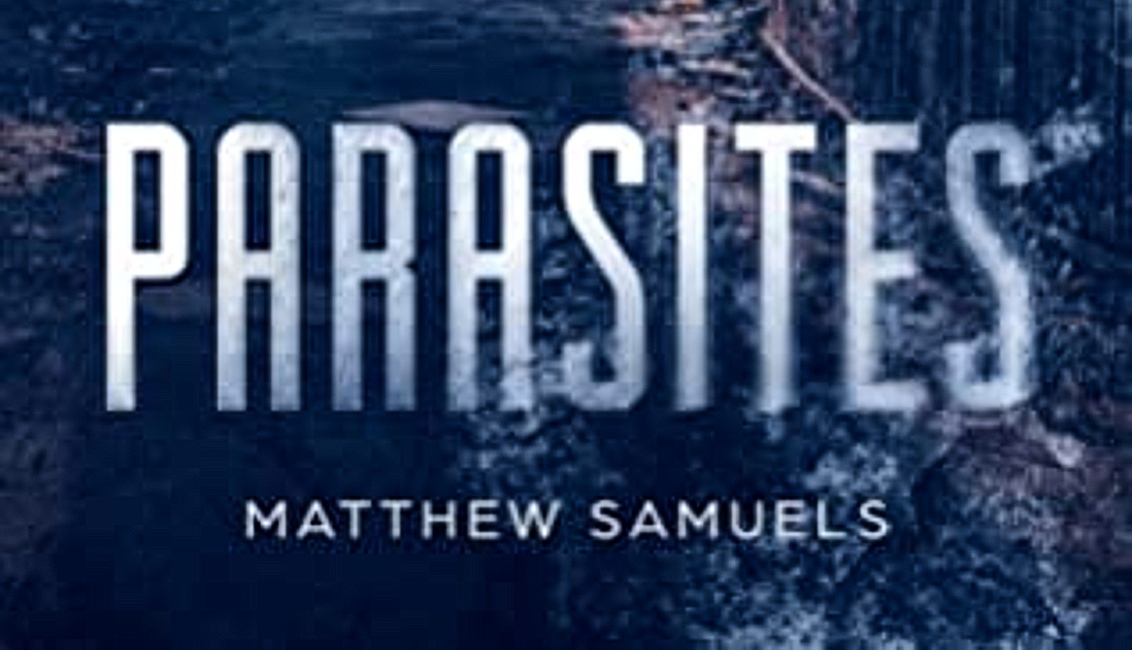 "Parasites at the end of the universe."
‍
-Matthew Samuels 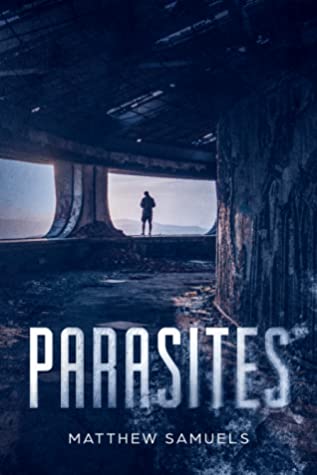 Matthew Samuels is a cross-genre author whose novel, Parasites, fits into an underemployed niche: Solarpunk. His focus is on immersion and believability, and he’s inspired by everything from Horizon: Zero Dawn to the masterful Iain M. Bank’s Against a Dark Background.The book follows two protagonists, Kael, who believes not being adventurous is a waste of human potential, and Alessia, whose father went missing, as they explore multiple planets for resources.

It begins cautiously, describing the book’s foundation with extensive direct exposition. Over time, the pace increases along with the amount of dialogue, and by chapter eight we see our first action scene. The action continually builds throughout the second half of the book, although you won’t find large-scale interplanetary wars, and there’s a good reason for that. Sentient species have become endangered at the world’s end, and war has consequently decreased as they learned they must work together to survive.

Alessia is not overly prone to conflict; she describes herself as sensitive to relationship dynamics, and romantic relationships are prohibited. So the characters generally get along, though the tension begins when Slyph joins the scene regarding whether she can be trusted,

One of her eyes is human, normal, but the other resembles something insectoid. Still human-sized, but clearly artificial, it completely unnerves Alessia – almost as much as the piping and wires coming from her arm and chest.

Samuels creates a universe where even the ants are scavenging to survive, carrying metal equipment in their mandibles and secreting an acid to make it edible; a universe where people exchange body parts with other species, and crystalline structures that can be fused with bone interact with thin portals in reality in indescribable ways. Much of the story at first relies on the background tension of needing to acquire natural resources and habitable land, rather than the tension of the individual scenes. As the book progresses, tension increases in settings such as a crystalline cave and a specially-purposed cathedral as new characters are introduced and insights are discovered about the nature of reality and its remaining inhabitants,

Wyl gestures with his hand, showing a route across the rafters, flicking his hand up where there is no logical join between the beams – it takes Kael a moment to realise that he’s indicating the traversal of a fold in space, but he takes it on trust that the Hidden knows what he’s doing…

…“We were not created to multiply. We were created to hunt the Ethereals across the vastness of space…"

‍The imagery is built by describing the scenes with a high level of detail and it is effective right from the start. Metaphor is employed very seldom which many hard-sci readers will appreciate. Others like myself, who consider prose a mere vehicle for poetry, may find the imagery unimaginative in the first half of the book, though the plot itself has many creative elements. When metaphor is employed, however, the imagery is much more vivid,

The entire visible surface of the planet is multicoloured crystal. The ruby surface beneath them breaks up the light from the spot and showers it back at the car, light scattering over the hover pads and hull like firelight. The car is sat on a relatively flat section, but it’s still faceted like a huge gem…

…Their world is a snow globe, a dance of flakes thrown around in a merciless storm…

…He rolls back his cloak to reveal a dark shirt, embroidered with flashes of lightning, flowers twisted around the bolts. He pushes up the sleeves to show silvery tattoos that don’t quite seem to keep still; they’re ornate, like snowflakes…

‍…The red glow from the crystal underfoot makes his armour look blood-stained. When he looks down, it’s like looking into an ocean, only it’s an ocean devoid of life, purely solid, descending as far as the eye can see…. (illustrated below in a screenshot from No Man's Sky). 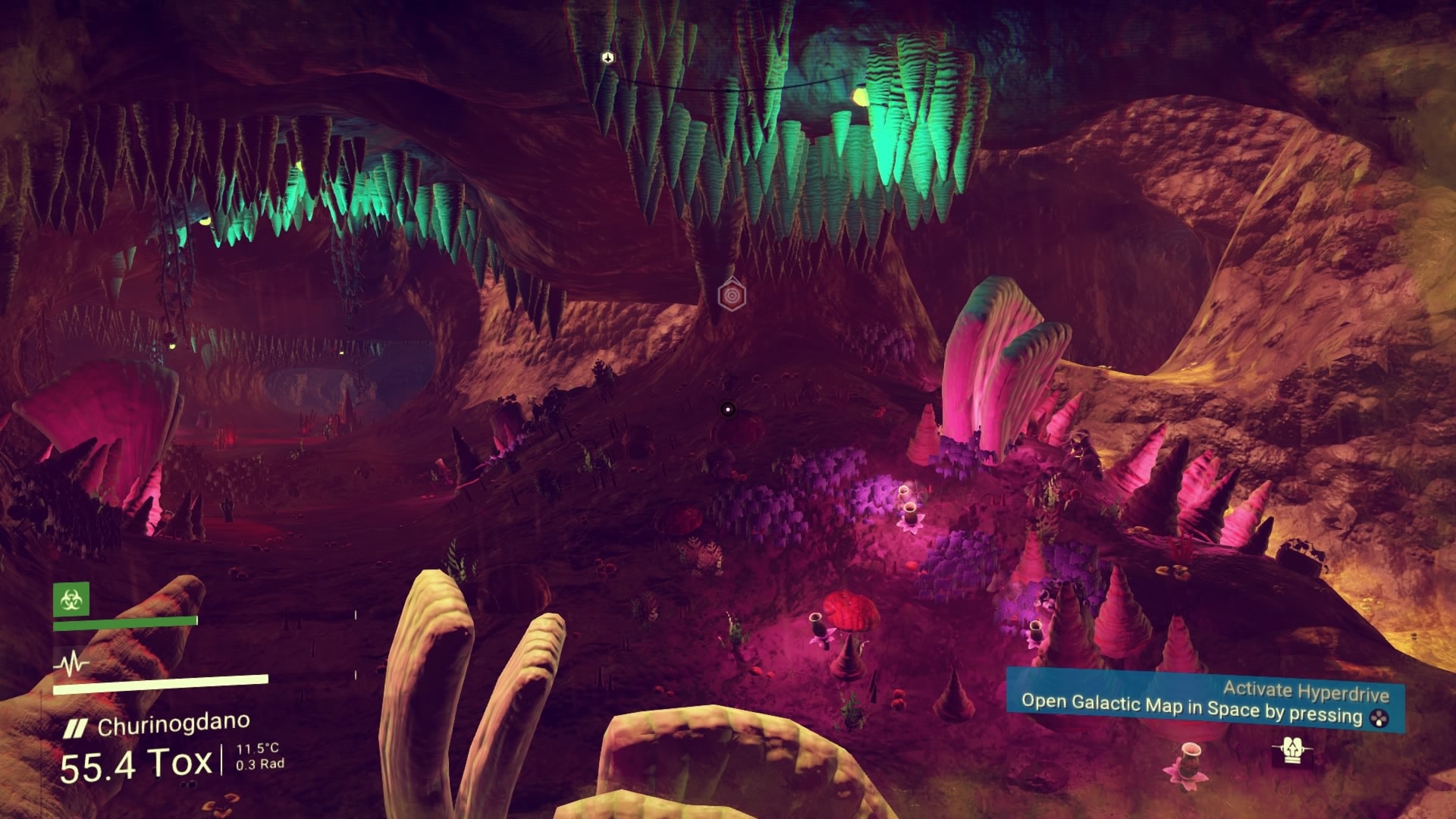 With that said, I found the characters a little difficult to picture with the exception of Alhambro, and found I couldn’t readily identify their vices (with the exception of Slyph). But then, hard sci-fi is often driven mostly by the science, so it fits within expectation. Slyph’s outbursts do add passion to the text,

You left me to die on that fucking space station! Then, as if her strings have been cut, Slyph sits down on the floor, hard, burying her head in her hands and sobbing.

‍One of the problems that E.O. Wilson, the father of sociobiology, stated that sci-fi has it that most of its creatures could never exist. Samuels creates creatures that are scientifically plausible, which adds to their believability, and reading his biological creations was one of my favorite parts of the book as I feel his creativity really comes through in those sections where he’s describing creatures like the kix or even more intimidating ones,

“But I’ve just forced the dragon crystal to support photosynthesis, pushing a small electric charge, similar to what might run through a human nerve, through it whilst it was attached to another piece of artificial tissue, similar to the dragon’s flesh. I can confirm with a reasonable degree of confidence that the dragons do photosynthesise, supplemented by what we would regard as a regular diet.”…

The fleshy leaves are surrounded by slow-moving jellyfish-like tendrils, each with its own inner luminescence that fades and brightens as Basteel moves his torch back and forth.

Eyes that narrow to slits glare at the intruders, as four short, stubby legs with clawed feet paw the air in time with its wingbeats.

‍The book’s a good, solid read. I really liked the parts in the second half that read more like fantasy, as I felt the creativity was the highest in these sections, which is why I’ll be interested in his upcoming pure fantasy novel, Small Places. Note that Parasites is marketed as YA (young adult) and it is, in the sense that nothing would be offensive or inappropriate for a younger reader. However, it is missing the conventions of young adult fiction, such as a generic boy meets girl sub-plot, and the use of first person. It is also marketed as solarpunk. Admittedly, the genre is still rather undefined, but it’s unclear what the “punk” or oppositional elements are in the typical literary usage of the word, although it does maintain the typical punk use of the present tense which provides immediacy. The categorization, however, has no impact on the quality of the text, but this is best described as hard science fiction. I was tempted to classify it almost as space opera, but it’s a bit too formal and focused more on a small group.

Much of Parasites reads like the game No Man’s Sky plays. Anyone who enjoyed the pace and exploration of that game will like the book. Those who enjoy hard-sci space exploration novels with gradual build-up leading to complex plot threads at the end will also find a lot to like. Check it out on Amazon, and watch for the sequel, Dusk, when it releases!