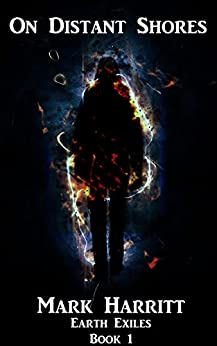 Before Mark wrote cyberpunk he wrote general science fiction. Sci-fi books about otherworldly predators usually have characters that fall into one of two groups, scientists, or military personnel. Earth Exiles - On Distant Shores represents the latter, as Mike Duggins and his SpecOps team investigate a disturbing site. From the start of the book, Everett experiences a creature remnant of H.P. Lovecraft, or Resident Evil which provides a foreshadowing of the events that would later occur,

The sight of it, the triangular head, the whipping tentacles, the gigantic talons, made Everett feel like he had lost his sanity… The beast looked reptilian, hide studded with thick scales, mottled green, brown and gray, the camouflage of an ambush predator… Saliva streamed in ropes from its mouth, trailing along the floor as it came through the elevator door.

‍The book begins on Earth, in a modern time when the biggest threats mentioned are North Korea and ISIS. The characters are not aware of a looming otherworldly threat. Since the book is written not as a response to a known threat, but instead as a journey into the unknown, it sacrifices urgency in order to create suspense. This results in a slower build up, but a greater sense of mystery.

The first half centers more on character interaction rather than action. Mike and Jo are about to have a baby, but life in the military causes Mike to have conflicting demands placed on him. It’s clear Mike loves her, but we’re not sure about the depth of her character qualities at first. He objectifies her to some extent, but she finds it charming. Their relationship is traditional in some ways (she is the one to buy the bassinet, which he doesn’t know the name of), but in other ways it is not; Mike is the one who does much of the cooking and washes the dishes.

Mike heads to Fort Carson to meet up with Everett and Rob. The three of them join others and form a band of brothers mentality, with bonds that transcend their ideological differences,

Mike chuckled, “Rob, Everett is a protestant. He doesn’t have to ask forgiveness for his sins from a priest. He goes straight to the source.”

“You Protestants are a crafty bunch. I have to get up early on Sunday to go to church, otherwise my priest gives me grief when I’m in confession and adds that to my act of contrition.”

Everett nodded in agreement, “Thank the lord for Martin Luther and Henry the 8th.” Rob looked at Mike, “And you and Jo?”

Mike replied, “We’re straight up heathens. I find my religion in Jo’s arms.”

Throughout, the dialogue is convincing and portrays a military tone, complete with the gruff, joshing humor and insults one would expect, and appropriate slang. The humor drives the slower build-up parts of the book along and shows the nature of how the men bond,

People are usually quite unimaginative when describing the act of intimacy between consenting adults, usually resorting to a few, select curses. Mr. Owens possessed the soul of a poet and the tact of a Bedouin goat farmer. He was able to describe the act of coitus in amazing prose which often stunned people into submission when he started. He was such a master at couching his vernacular in subtle, sarcastic terms that many people didn’t recognize the insults levied at them.

As the team readies for action, they get adjusted to new equipment as the science fiction elements become more predominant,

The mech armor sat there like offensive linemen in a football game…The suits were set like sumo wrestlers standing on line, fists on the ground...

“Okay, this is where you turn on the neural interface of the helmet, and it will take over for you. Now, go ahead and touch the icon for ‘Neural Interface.”

Mike touched the screen. The icon for neural interface went amber, and then turned green.

The action scenes have a believable intensity to them, and increase over the course of the novel,

They both looked at the beast in front of them. Everett watched as its huge fangs flexed in and out if its mouth. Then he noticed its body massing, muscle contracting, the back legs tensing under the body. “Get ready, here it comes!” he yelled. Tom fired the first shot.

Mark conveys the scenes with good attention to detail, good description, and very believable dialogue. The Earth Exiles series is a journey into the unknown that continues across five books. This book would be best enjoyed by a male audience with traditional views who likes military sci-fi and crass humor.