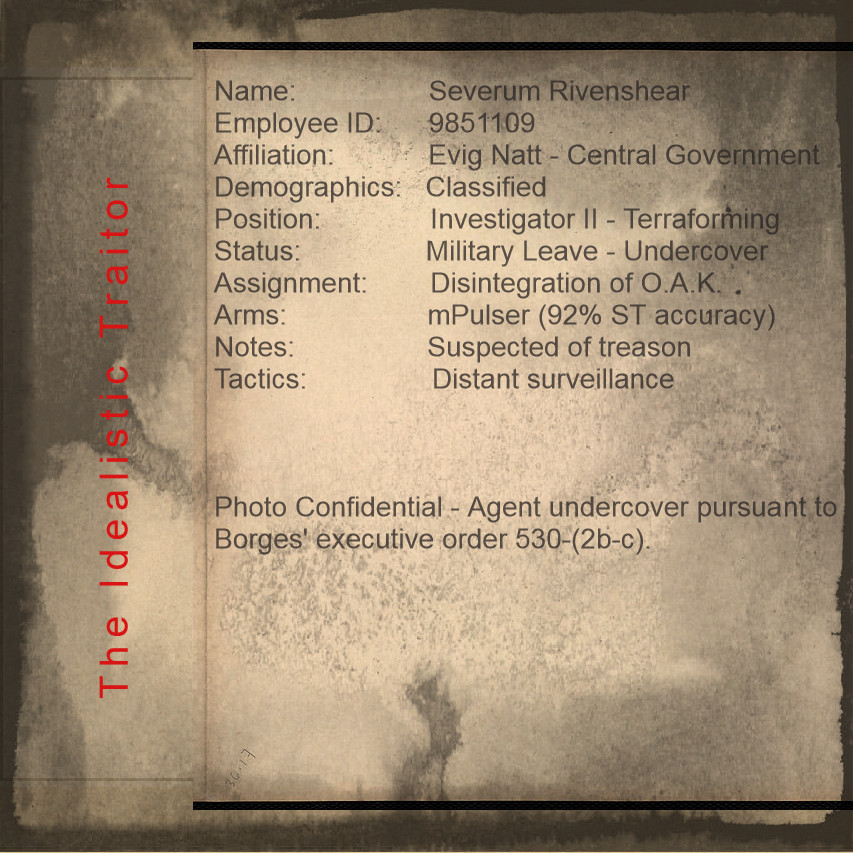 Severum is one of the main protagonists in Hemispheres. His motivations in a crucial section half way through the book puzzle some readers, but the critical plot twist in his character arc is why I wrote the book, to show the flexibility of human motivation once people sit down and communicate. The following passages should be paid attention to regarding his motivations.

In-between the lines, he searches for something he can fill with his own voice, but finds no container to house it.

‍Dancing for the Gov’nor up there in The Towers, a king’s pawn sent out for a gambit, vomiting chemicals to develop someone else’s film.

Thoughts compete for his attention and replicate aimlessly but they seem small now before the great towers. Smashing a slug under his foot; shooting ooze towards the front door.
‍
The fluorescent lights bother him as he thinks of the disgusting insects that swarm in his home just to have enough light to live by, while behind the scenes the governor is using whatever source of light he fancies, a source illegal to the masses.

Afterwards, Severum asks (the governor) an uncharacteristic question with the blur of fluorescent bulbs fresh in his memory, “Before I go, can we discuss the welfare policy?”

“Welfare is just a way to pay off the lower class so they don’t knock down my door," (the governor replies).

‍"I found something, an illegal source of light in the governor’s quarters. It made me question the nature of our firefly economy. Maybe bringing light to the hemisphere would be the best thing. Or maybe the ecological costs are too high. Maybe the period of instability would be too violent to be worth it. Either way, I have commitments to keep, but it’s been weighing on me,” he says, pacing.

He vows to devote as much time to sustaining life as ending it. It just doesn’t pay as well.

Having previously enjoyed the bonus checks from hunting them down he shrugs, ignores them, no longer able to hold their light-seeking against them after what he discovered in the governor's office.

Finally, his very name, Severum Rivenshear, contains three references to splitting or cutting oneself off from something.

Thank you! Your submission has been received!
Oops! Something went wrong while submitting the form.
hOME pAGEorder now - Due July 2020
( Credit: Sound effects from zapsplat)