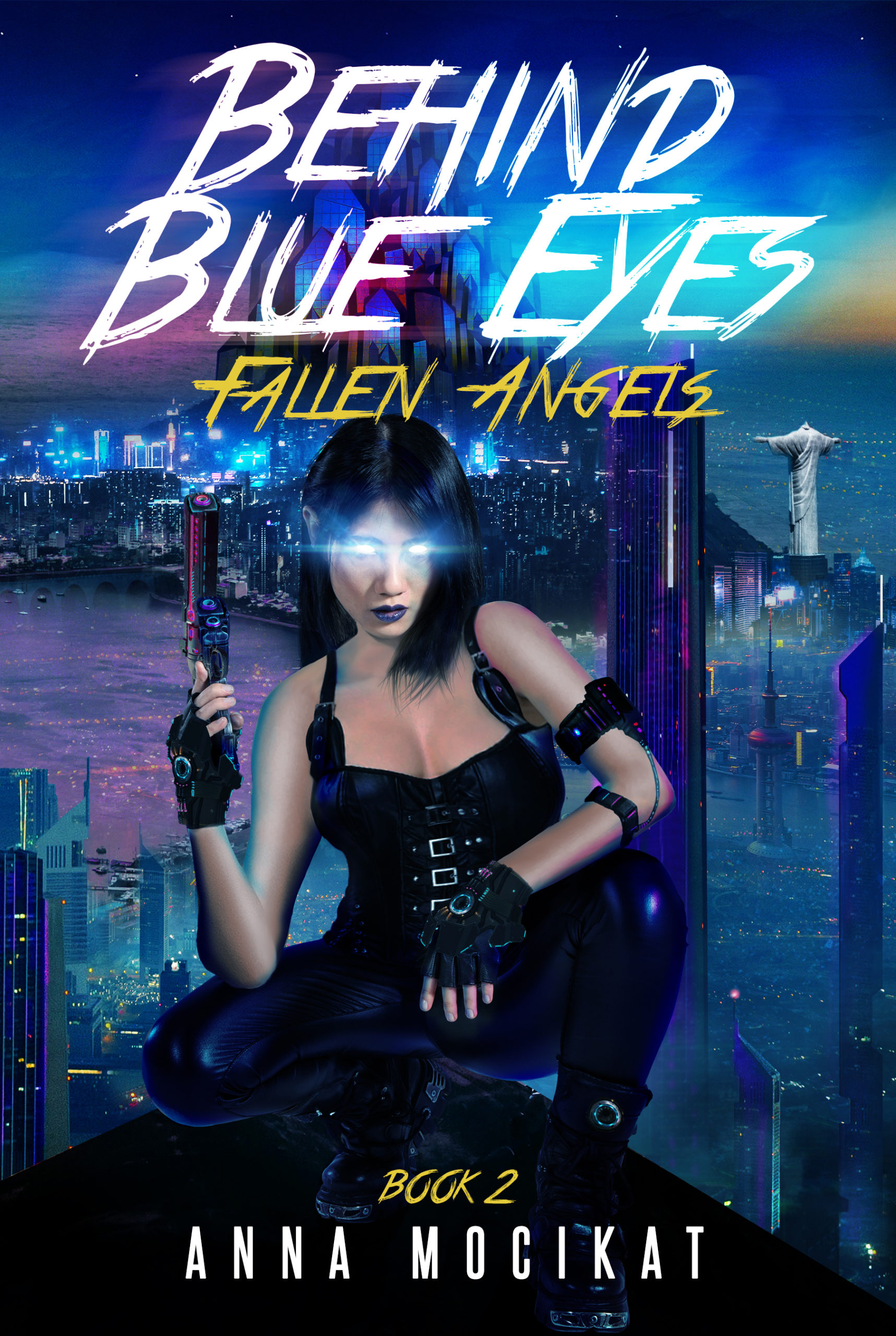 Overview:
‍
Of the sixty books I read in 2020, the first Behind Blue Eyes was one of my favorites. The story occurred after World War III in a world where three competing corporations had taken control after the collapse of nation-states. Nephilim, a cyborg woman who worked with a death squad of cybernetically enhanced “angels” to support the status quo, was at the center of this conflict. Having had her memory wiped by her employer, the book’s narrative drive focused on the revelation of her history.

The series continued through a recently released short story available through Anna’s mailing list that bridged the books through Finwick, a reluctant computer scientist. Good Guys was also published in Neo Cyberpunk: The Anthology, which takes place in the same world. All this leads to Behind Blue Eyes – Fallen Angels, the second book in the series.

A murder of an angel has been performed by exploiting a recently exposed vulnerability. This sets forth a series of events as Metatron and Nephilim work to determine if it’s the competing factions Rosprom and TogbuaXiang behind it, or a rogue group.

The story is told from a variety of perspectives, from Nephilim, to Finwick, Jake, two detectives, and the antagonist, Metatron. This would pose a challenge to any author, as there’s less time to develop each character. This is further complicated by Nephilim’s memory being wiped again, stalling her character arc and the romantic subplot. Anna meets this challenge by focusing more on Metatron as he fills this gap and shines fuller, becoming the most interesting character.

Metatron has everything he wants in life, power, influence, luxury, but it has all grown tired and boring. The one thing he doesn’t have is love, and he seeks that only through Nephilim, who he protects and is affectionate to in a way that transcends objectification, surprising himself. He can never have her love in return, however, because their relationship isn’t genuine, it has always been based on a substrate of forgotten lies. Part of what drives his love is this lack of its availability, for the man who has everything else.

Metatron leads a legion of angels, and is a template for their creation. His life was full of loss at an early age when he lost his loved ones during a strike, his sister dying in his arms at the age of eight. In a way, he considers his former mentor with the organization, Nephilim’s father, to be his own substitute father, and that makes Nephilim not only his love interest but also, unconsciously, the sister he could never protect. A rational man who hates hypocrisy, he can’t help thoughts such as the following,

The High-Archangel had survived for so long and become so successful because his mind was playing 4D chess at all times. Always calculating all possibilities, always being one step ahead of everyone else. But without her, what was the point in playing the big game?... Metatron would never hurt her. No matter what. Even if she would ultimately destroy him.

Metatron also fears not being able to transcend his mentor. Nephilim’s father was the only man he loved, but he killed him, for this love was tied with power and influence and a fear of being inferior. This fear also drove his cybernetic augmentations, which are so superior he no longer considers himself human. He admits that he misses her father during a rare moment of guilt that inspires him to protect Nephilim. But protection for him isn’t communicating and dealing with issues, it’s using his power to erase them, gaslighting her from within.

The High-Archangel took a sip of his drink. Strangely enough, he never had liked whiskey. But it had been Nephilim’s father’s favorite drink and he had become accustomed to it over the years.

‍When one sees Nephilim’s father as being a substitute father figure to Metatron, one call analyze him from a Freudian perspective. A metaphorical patricide should have occurred by him taking this father figure and incorporating it into the birth of his superego, but he didn’t, and he instead literally killed his mentor, preventing his superego from ever generating a conscience to guide his moral actions. This is why he says that values are just a matter of perspective – he has no superego, only an ego and an unsatiable id.

Once he… had accomplished what his mentor would never have even dreamed of, his presence would fade away. Then Metatron would step out of his mentor’s and master’s shadow.

Metatron is a textbook sadist, always looking for power over others, but in the end it leaves him feeling empty, so he clings to Nephilim as someone sacred that he sets aside from his daily routines of torment and hedonia. He ultimately lives in fear that his creations will destroy him, just as he killed his creator.

Metatron could outright sense the power culminating in this place, however. It was like a vibration in the air, an invisible yet omnipresent pattern. The High-Archangel thrived in this energy whenever he came here.

‍His obsession with her turns to voyeurism in both books as he sees the world through her eyes. This is unusual as it puts him as a passive observer, but it makes sense, as ultimately his motive is to see through her eyes to understand himself.

The action occurs at just the right frequency without being overdone. Most of these scenes revolve around Nephilim’s acrobatic gunplay which any cyberpunk fan will enjoy.

She ran up a car that stood at an intersection and from there leaped into the air, using the full momentum of her crazy speed. Her fingers grabbed the handle of her drone, which slightly resembled a mechanical version of a dragonfly and had the size of an eagle. She had commanded it to fly above her, matching her speed until she had reached the perfect point to jump. The drone accelerated with her hanging under it and took a steep ascent to the highest transportation line, the Speedway. A second later, she spotted the fleeing car. Nephilim flew higher and now pushed her drone to the limit to match the vehicle’s speed…

Like a black jaguar, she crossed a distance of seventy feet. Instead of fighting herself through the crowded center square, she simply jumped over it... The people dining below didn’t even notice the black shadow leaping over them…

Still stretched out into the air, her right arm extended its blade. It shimmered in the low evening sun for a moment before she rammed it through the roof of the car and into the skull of the man trying to shoot her…

With lightning speed, Nephilim drew her pistol, which had been hidden under her latex coat. She could see through the tiny camera that was mounted on her gun and was connected with her over a neural link. It gave her the ability to aim without having to look in the direction…

The following excerpted phrases sum up the world Nephilim lives in, which is consistent with the first book:

The most efficient way to achieve total control is to strip humans of all communities and social contacts, cut off their roots. If they form families, communities, friendships… they are more difficult to control. Communities make people strong. Yet, when every individual only exists by and for themselves, they are weak… The founders of Olympias used the full force of propaganda to convince people that social constructs were obsolete… they simply banned religion… The next step was to dismantle families… The society you know was created. A mass of individuals, pursuing personal gain and fulfillment without taking care of anyone but themselves. People without roots can be shaped into anything desired.

The writing is straightforward and fast-paced. At times the obvious is stated, but this ensures the reader never loses track of the plot. The style is sometimes more tell than show, but this carries the benefit of being able to convey multiple plot angles more efficiently. Many stylistic decisions in literature carry a benefit and a drawback. The book’s tone is exceptionally grave, save for a few funny references to Steampunk 2020, the year 2077, and the Who song by the same name. Over time, the writing style changes somewhat, with paragraphs becoming longer and more developed, and with Metatron showing more interiority. There is little metaphor and those who like concrete prose will feel at peace. The imagery provided is just enough to set the scene. My favorite line was the description of Fenrick’s VR platform, which granted does contain two similes and a metaphor,

It looked a bit like the high-tech version of an ancient Egyptian sarcophagus and was big enough that the player inside could float in pleasantly tempered water, like an embryo in an oversized womb.

Like most second books in a series, the book leaves a lot of the pressing outcomes of the first novel unresolved but makes you want to read the upcoming sequel, War Games. I was hoping that Jake and Fenrick would receive more attention, but the focus on Metatron to drive the plot works well, and his excellent characterization drives the entire novel. Fans of the first will find themselves at home in this sequel. Check it out on Amazon when it releases on March 24, 2021!